Due to its higher elevation & cooler temps, Anthony Lake came highly recommended. With 9 miles still to go and it being past time to make camp, I took the first forest road.

Camp was just above the pavement and the traffic convinced me to explore the forest road. It ended at a trailhead where I, for the first time in decades, headed out.
A Venerable Sign 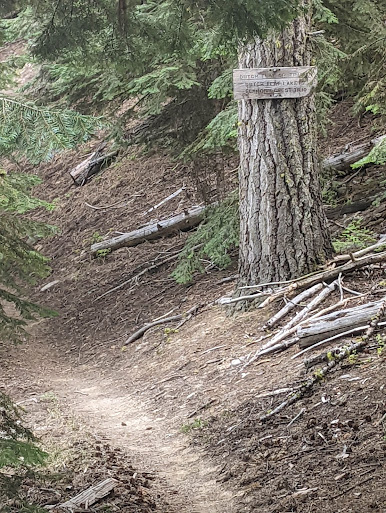 I wasn't able to go far, a straight-line distance of a little over 1,500'. And though it only ascended from 5048' to 5138', for a stretch I was leaning forward at about a 15-degree angle and using a real, live stair-stepper.
Beyond the top and starting down the other side, I checked Google Maps for the distance to Dutch Flat Creek. A mere 16 minutes, and all downhill. I'd been on the trail more than two hours; I doubted I could make it back up.
A Nameless Reservoir 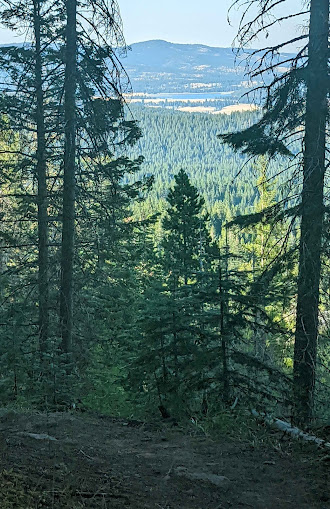 It'd been 12 hours since morning meds. Usually I take 'em 8 hours apart skipping the middle of the night dose.  Nearing camp I noticed some twinge, but nothing of concern.
I'd have liked to see how long it'd have taken me, but today was a gift!
Posted by MFH at 9:51 PM No comments:

Email ThisBlogThis!Share to TwitterShare to FacebookShare to Pinterest
Labels: Oregon

In the hills of eastern Oregon! 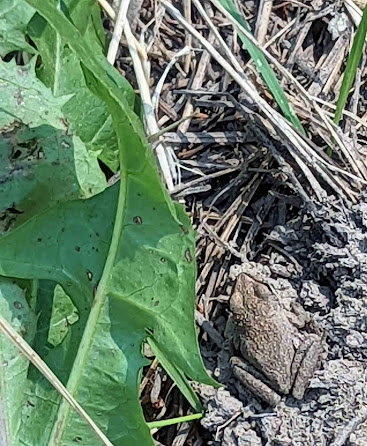 There was a troop of them; all less than the size of a penny, hippity-hopping their way acrosst the dried area of the campsite. No bodies of water nearby; they must be toads. 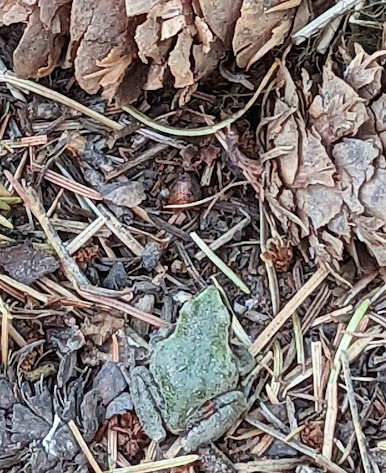 At Faerie Beads a pair of small abalone shells were displayed on a beautiful Noritake plate that looked like a copy of Meissen or Rosenthal. The trio made an "ensemble" but the plate belonged to the owner's mother and she wouldn't sell it. She sent me to Craig's to see if he had something. 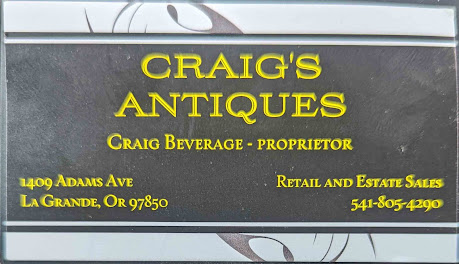 He told of having graduated in the early '70s when his degree in Business Management was useless. Needing employment, he worked at logging until, eventually, a lumber company hired him to manage their business. Interaction with customers was sometimes difficult prompting him to quit a number of times; but they always managed to lure him back.

He described driving down the street one day when God turned his head so he'd notice the empty storefront for sale. Leaving the lumber sales business, he said he came to realize it was his "job" to be there for all the people who come from all over the world. He has friends from the Marshall Islands to Portland and while I was there a steady stream came through. A couple spoke of their visit several years earlier and how much they'd enjoyed it; a woman came to invite him to a funeral; I watched as he coaxed a tidbit of info from another that enabled him to connect one of his nephews with her sister-in-law; it was heartwarming, a kind of interaction that I gathered is not all that uncommon in rural towns.

The shop is over-flowing and most of it is older than I. Whilst standing in front of a case perusing, a man came up and pointed out some Murano glass from Italy; I recognized a long-barreled pistol from my preschool days when I sported twin holsters and put in a hard day on the range before my afternoon nap.

He was completely opposed to photos of himself or the interior and NO means NO so you'll just have to go see. It's a destination. He did, however, express enthusiasm for a photo of the exterior.

The only signage is a handwritten note at eye level on the door that reads, "Craig's Antiques." 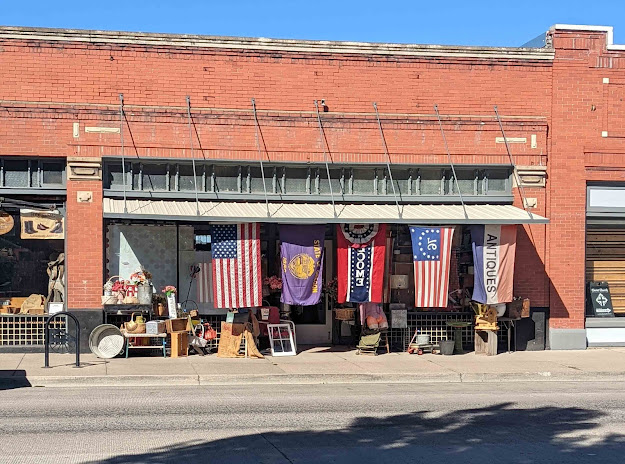 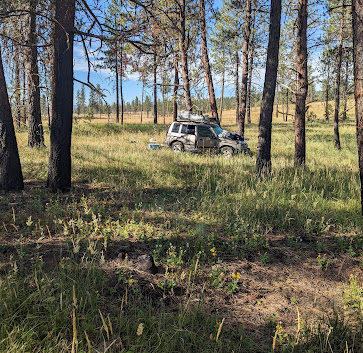 I discovered the car registration and insurance card had disappeared. I surmise it might've been taken by the pranksters who let the air out of the right front tire.
Replacing the insurance card was easy enough with a trip to the library. But the registration involves getting ahold of Motor Vehicle Division in New Mexico. I've called the Governor's office twice to see if they could help me get through.
This is my fourth day and not a single car, atv or hiker. Bliss! 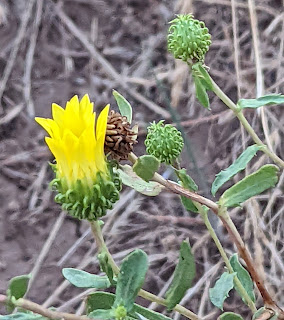 7pm Update: I jinxed it. No sooner than I used the B word (we'll whisper it: bliss) than a friggin sheepherder from Ecuador shows up! We managed a five-minute conversation, in Spanish, about our origins before we gave up.
Posted by MFH at 6:00 PM 2 comments:

It's hard to guage distances in a land of this size. The highway's windings provided a partial view...and it was longer than I'd guessed. At a surmised temperature of a pleasant 87 degrees where I was at 4,200', down there, where the Grande Ronde flowed, it was gonna be oven-esque. But I'd espied the road that ran alongside and was certain it needed exploring.

As expected, it was intense, but the river is beautiful. I'd maybe gone about three miles when the Bezona Public Access Area hove into view. After a thorough search for a NO CAMPING sign, we, Phoebe and I, settled in next to the lone pine. 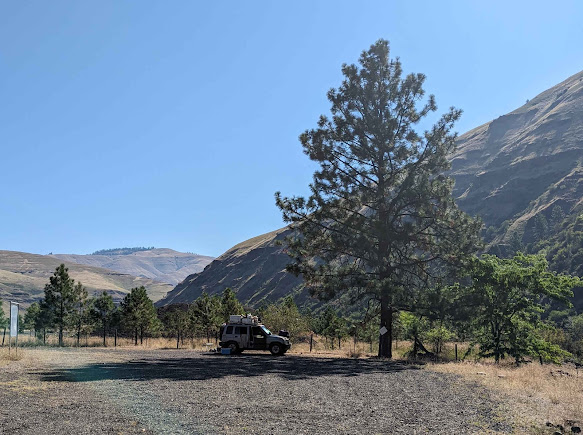 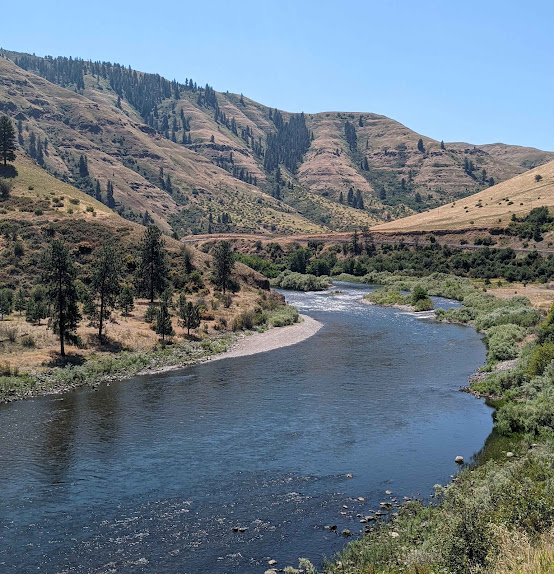 The piddle to Troy, ten miles, was nice. The heat necessitated keeping my shirt soaked, but its heavy, almost canvas-like cotton worked as a personal swamp-cooler.

Troy turned out to be barely a Bar & Grille with a combo showers and laundry across the street. All closed. Not a soul or sound.

Suddenly a man appeared and asked if I'd seen a white dog. I hadn't but immediately began looking. He soon yelled "Here she is!" and I watched as the animal galumphed across the road, totally ignoring the man's whistles and calls.

I asked about water and he offered me some from his nearby cabin.

After filling the jugs he helped carry one back. During the journey I learned he'd been coming to the area for decades to fly-fish and hunt chukars. To keep in shape, he walked up the nearby hill every other day. Tilting my head alllllll the way back, I could just see the telemetry tower on top...perhaps a thousand feet away, almost straight up. At 75, Martin looked in top condition with not an ounce of fat.

We were perusing my laptop maps when a fellow on a motorcycle came down from the same hill.

The Scotsman -- his accented "hello" had prompted an inquiry -- was returning to Prineville (Oregon) after touring Wyoming, Montana and Idaho on his single-cylinder Honda 650.

As he acknowledged the danger of motorcycling, he told of a plate in his right forearm acquired after he blocked a plummeting boulder while rock-climbing. He'd also crawled three quarters of a mile to his office after his bicycle slid on ice and he broke his ankle. He'd been all over the world including Sumatra, Thailand, Afganistan and Africa. He'd spent the past several days in Clarkston, Idaho, awaiting repairs to cracked rear wheel hub and was now making up for lost time via "the back roads." As we watched him leave, Martin wistfully commented, "That looks like fun." When I asked why he didn't pursue it, he said he was too old.

An hour or so later, looking for access to National Forest, I turned onto a small road that was signed: NO TRESSPASSING, WARNING TRAPS. Noticing a pickup close behind and thinking it might be the landowner, I pulled over.

Kurt, an Enforcement Officer for the National Forest, told me the road was owned by the County and went to Wallowa...where I wanted to go. He warned that the switchbacks were tight and the road, barely a single lane, could be intimidating for those with a fear of heights; I acknowledged my wussness. But he said, "You can do it." He went first as he knew a place to turn around. 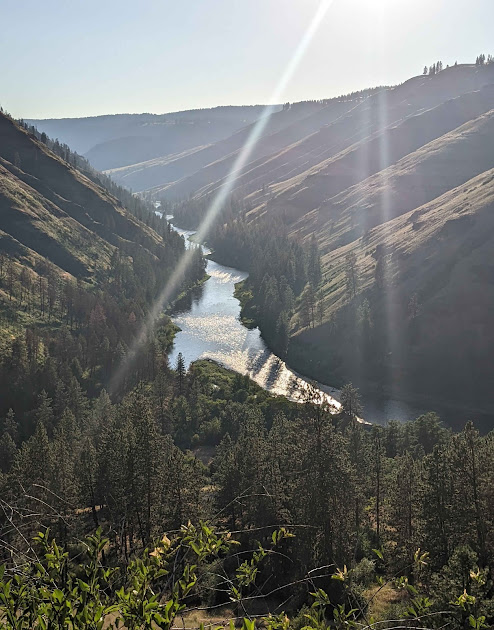 He wasn't kidding. If you follow the angle of the hill down to the left, you can just make out where the third switchback comes around from the other side. Still a ways to go to the top. 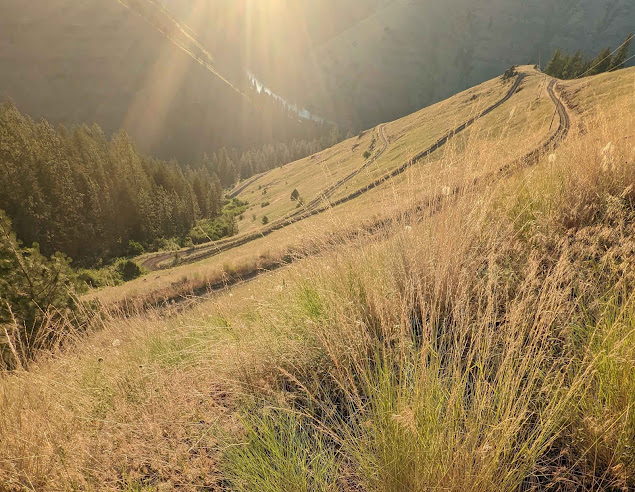 I'm still wondering what prompted him to follow me and let me know the road went through.

It's the shortcut from Wallowa to highway 3. It enables one to avoid the town of Enterprise. Maps said either way was about 53 minutes. I've managed to stretch it out to more than 24 hours with an overnight atop a hill with a better view than the one below of the Eagle Cap Wilderness. But at this point I don't even bother trying. Maybe with a 4x5 digital, but not with a $900.00 android phone. 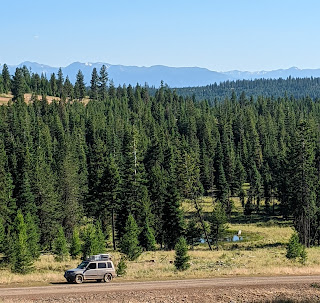 This stump, about 30 inches acrosst, prompted speculation about what the forest might've looked like. 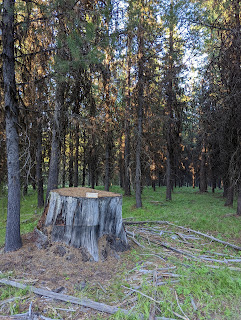 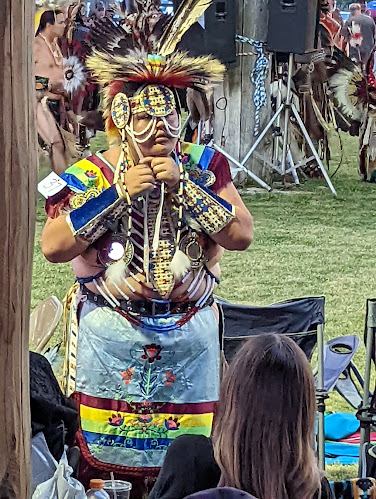 Notice the woman in upper left wearing a mask.

The man upper right with camera.

Man at left with yellow vest. 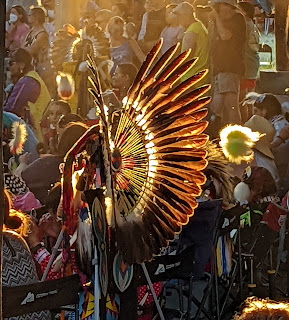