Fred, the host at Ft. Craig Visitor Center, said he gets lots of Germans. He said they know more about Western History than most Americans. And they're willing to make the four-mile trip, one way, from the highway.

We'd solved all the world problems and were basking in self-satisfaction when Ed and Mary came in. They're overlanders and had just concluded an expedition across the Navajo Reservation. They'd been forced to backtrack 60 miles by a locked gate that wasn't shown on the old map they were using and were a tad concerned about the time. But Ed said they'd met several folks who'd invited them to stay and it'd been a great time. Unfortunately, they had to be in Tuscon by the next evening.

They've been married 37 years and retired at age 50 when they began traveling...eight years ago. Mary had hiked to Phantom Ranch, at the bottom of The Grand Canyon, a few days before. Ed said he felt incredibly lucky as there aren't many women who enjoy the lifestyle.

They had bought several fixer-uppers and then rented them out. The houses provide most of their income, but they're both nurses and, when necessary, can easily find work. 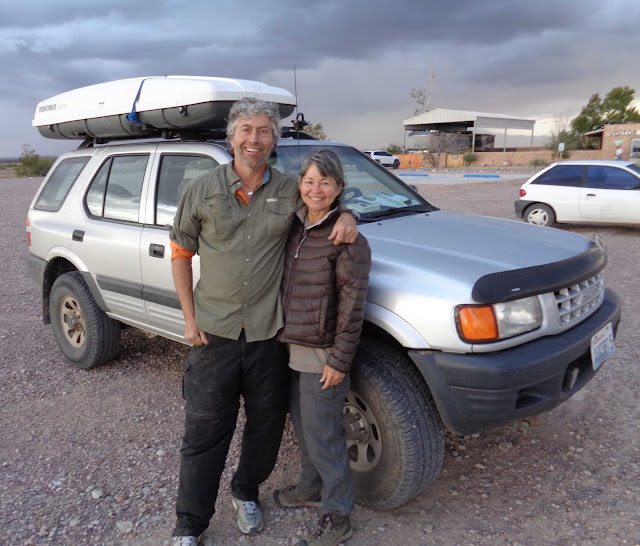 Ed said they live frugally; no children except their pets and they're down to one 20-year-old cat. It usually travels with them but had decided to layover in Tuscon (thus the need to return). Repairs to their vehicle have been minor. It has a little over 150,000 miles on it. They look pretty happy, don' chew tink?

The Fluffiness of Ocotillos

The plan was to visit a little-known overlook at the South Rim (of the Grand Canyon) followed by a slow wend up to the North Side.

At camp that evening,

not far from Williams, Arizona,

it was warm enough to comfortably make dinner

In the morn however, it was a different story. Mixed clouds with a chance of dog biscuits (we're cat people, dontchya know?) discouraged any inclinations toward the breakfast lingers. We wuz on duh rode at an unprecedented 10:30 a.m.

By noon I was at the Geology Museum on the South Rim. There was (similar to there is instead of there are) intermittent drizzles whose localized sheets of misting made for great photos; they also helped distract from the fact that you can no longer clearly see farther than the first line of formations.  I was surprised to read on the big info placard outside the museum about how the haze is man-made and even comes from as far away as Asia (wow!!..to quote Andy Warhol). And although on a good day, they go on to say, it's now clearer than it was, on a bad day it's as bad as ever.

It took a while to locate the spot, but the Great Cosmic Furrball beneficently held the wet at bay during the hike out, while the sun set, and all the way back to the parking lot. But by Tusayan, the supply hamlet a few miles south of The Park Entrance, it was pouring. It was reaaallly dark when I pulled under the big ponderosa back at the North-of-Williams camp (NOT Kaibab Lake C.G. If boondocking-curious, email for directions).

The next two weeks were spent one-jumping ahead of the reins. Between grumbles about mildew & wet tarps, I marveled at the fluffiness (fluffiness!!!) of the ocotillos along Chicken Springs Road, the first leg to Alamo Lake*. When everyone else was ready to hang it up after a long, hot summer, they are partying heartily.


This is as close as I wanted to get. Water, especially lakes, gives me the heebie-jeebies. 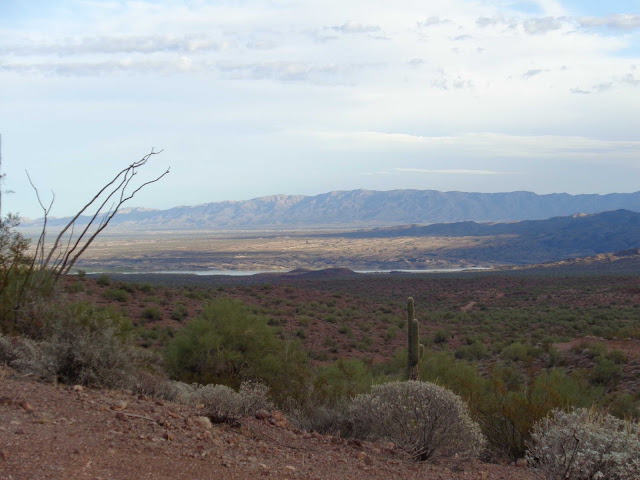 Kingman's blue sky inspired new optimism. Happily humming We've Only Just Begun, I took highway 93 20 miles (perzakly) to Big Wash Rd, about two miles beyond Chloride. I'd read about Big Wash in a trip log on Overland Frontier (couldn't find it now) and was eager to see for my self. But, again, the rains came.

After some reflection I recalled that my new, improved, laptop-charger had probably arrived from China and I should return to Albuq to get it. While there I volunteered to fix fence in the Gila Wilderness to keep cows out of wolf habitat. Hopefully Obama's and Governor Brown's (of California)


will have an effect


within the next few days


This too may have potential.

* I made it to within about five miles of Alamo Lake, but espying, thru binocs, a bevy of RVs, I decided to put down roots where I wuz. If u 2 eschew (it rhymes!) close proximity of others, watch for the spot on the left near the top of the hill overlooking the lake. There's one right at the top on the right, but it doesn't have the view of the canyon to the northeast.

It was like Mulberry Street. Toodling along on the freeway with nothing but the usual. Then suddenly...a golden flash from the HEADLIGHT of a car behind me. What was this?! A turn signal the size of a cantaloupe?!!

As the radiator came along side its texture hinted at what was to come. And then, at the firewall I began to experience the excitement Marco sought; something different! 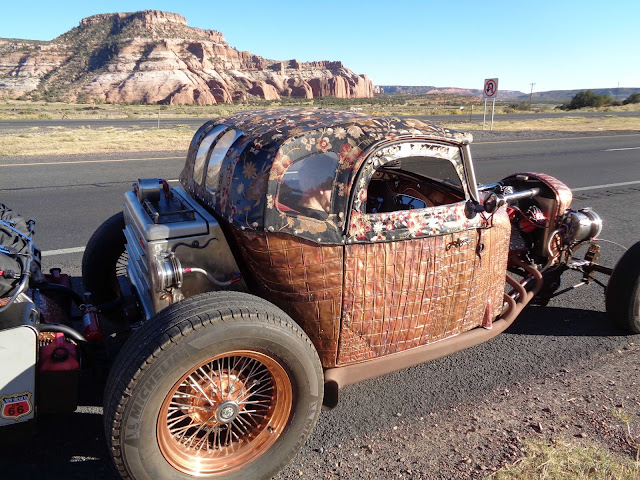 When they stopped at the Arizona line I pulled in behind. 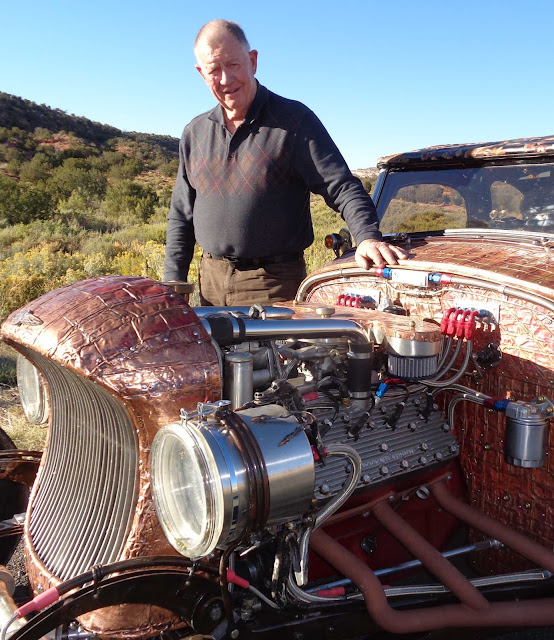 Phil Endicott claims he's just a Missouri farmer; never thought of himself as an artist. He spent three years hammering the copper sheets that are the body, forging the myriad other accoutrements and cutting, sanding and polishing the teak that compliments the interior. (That's teak under the windshield and the sideview mirror in the photo below.)

It was hot in the sun but Wanda managed to smile. 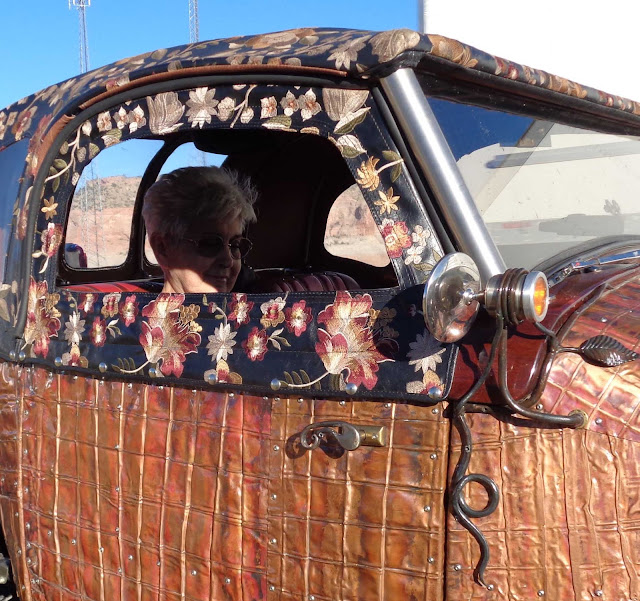 They were on their way to Los Angeles to take delivery on the custom front wheels to match the rears.


Contrary to what it looks like, Phil said the interconnected triangles were personal symbols of the Dodge brothers...not the Star of David. It's use was discontinued in 1932. 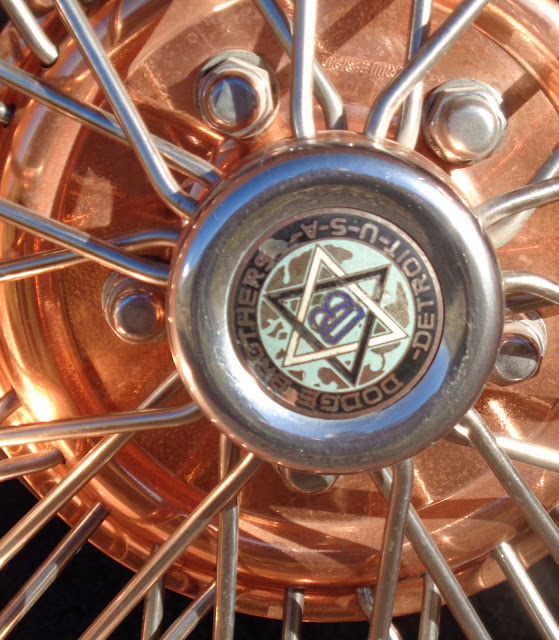