It was late last summer when we parted. We'd had a great time in Twin Falls (Idaho) where, in a thrift shop, we recreated a scene out of a movie in which the female protagonist is "helped" into her evening gown. We figured it out and it set the mood perfectly for the five-o'clock-martini.

But this time things didn't go as planned and our rough edges got the best of us.

So now, the question, traditionally relegated to whim, is, where too?
Posted by MFH at 6:16 PM 3 comments:

Email ThisBlogThis!Share to TwitterShare to FacebookShare to Pinterest
Labels: Elko

88 Across the Sierras & Kenn Louie

Kenn Louie had a roofing nail go the wrong-way-first into his eye. I have an appointment in September with Dr. Charles Lin at the Byers Eye Institute, the guy who fixed Kenn's eye.

I read a lot of Jung. That, combined with being in California, the land of abounding numinosity, may have something to do with my perspective (but maybe it's just my eyes).

It was soon after I broke the tip of my walking stick when I was in the Arnold grocery and asked the cashier if she knew of someone who could fix it. She sent me to Kenn.

Later that day, while watching him do his stuff, she drove up and I was introduced to his partner; they've been cohabitating for 14 years...maybe even married (I didn't ask).

So, this time, as I was planning my route to Nevada, I wanted to stop in Arnold. Thinking how it might be late when I left, I stopped first at the grocery. I went placidly through the line, getting directions to the ice machine, etc., completely unaware the woman in front of me was the one and same as the time before.

It's the one in the sun that got "worked" on. 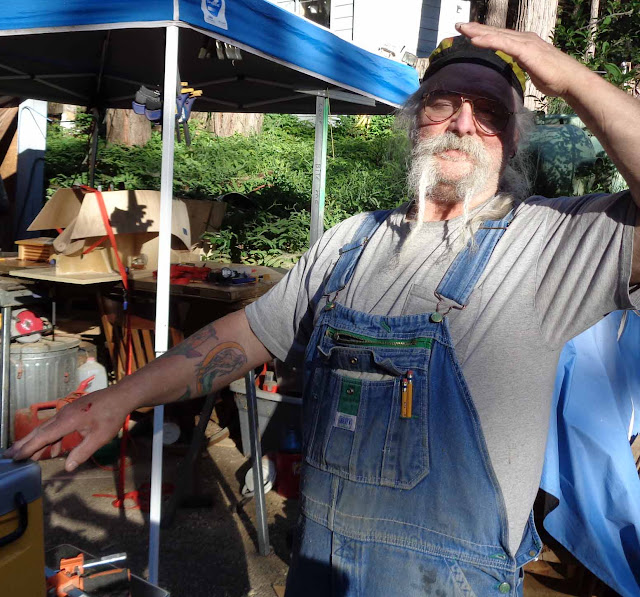 As we, Kenn and I, enjoyed a bite of beer, Lori drove up. I, figuring he'd ignore the opportunity to introduce me, asked, "Who's this?"
"The boss," he replied.

I had only the vaguest recollection of seeing her in the store and no memory of having met before. (it was late that evening, in that soft drift toward sleep, it came back; and I recalled how "numinous" it was that I'd asked her about a woodworker.)

Kenn lost his left leg a few years ago to bone cancer and has a metal one instead. They took off part of his right foot since we'd last seen each other. And he showed me a quarter-sized circle he'd drawn on the edge of his work table. It was the spot, after his stroke a couple of years ago, he used to relearn how to hammer. When he wasn't doing anything else, he'd come out to his worktable and practice hitting it.

If yer gonna listen tuh the radio, its gotta have the right cachet. 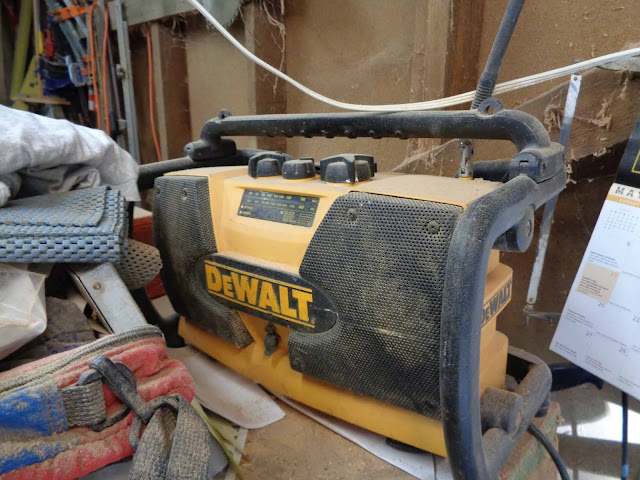 He found some plans for a rocking-horse boat. Instead of a horse, it's a boat...on rockers. Forcing the luan plywood into the sides and onto the transom. 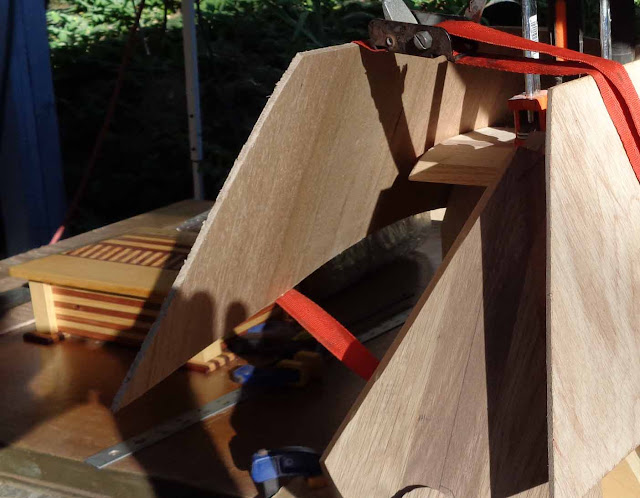 Note the redwood and pine box on the left. His artistry is astounding! And prices are affordable. Call him at 209-768-2587 to see what he's done lately.

His motor skills are such that when something has to be redone he can pull out (for reuse) without deforming them, the copper nails he uses. His patience is amazing and every other word is an expletive. If I thought he was gonna live long enough, I'd find him a parrot. 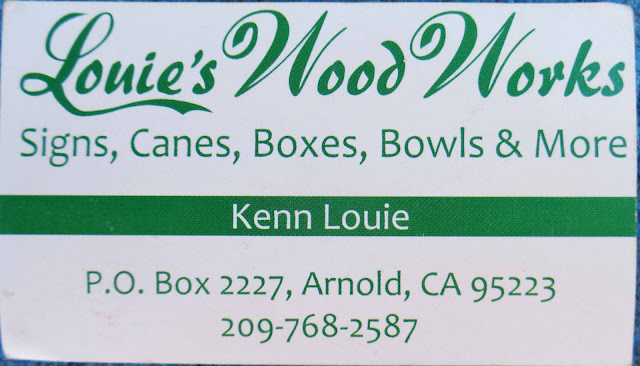 Eastbound for the Ruby Mtns SE of Elko. She, who remains incognito but dresses for the five-o'clock martini, has a mind to go lookin' tuh see iffen there're any Lahontan trout still out there. I get to tag along.

So, I 'cided tuh swing by an' pay a call tuh that ole pirate, Kenn Louie. He's the one who fixed my stick after it got broke when i wuz practicin' muh bo moves on a dead tree.

I made it just past Murphys into the Stanislaus Forest.

I was sitting in the eye clinic in Albuquerque the other day when the woman next to me launched into a scathing critique. She'd just blown in from China where, she said, "Yes, you're sitting in a waiting room with a hundred people including screaming children, but once in the presence of the doctor, unlike the physicians here, they didn't act as if they expected to be treated like gods. In contrast, she said they were quite gracious and gave their full attention and time. She added they also had state-of-the-art equipment.

I'm no judge of equipment, but the Doc barely muttered an introduction and set to. He asked a couple of questions, examined my eyes, typed FURIOUSLY at the computer, asserted that yes, I AM a candidate for a cornea transplant, answered my few questions with hardly more than monosyllabic responses, turned....and left. It was when they indicated I should follow them to the front to sign a release in order for them to obtain my Albuquerque records that I realized we were done.

An overflowing bowl of stinking peppermints graced the front counter....to encourage your diabetes.

The other conditions make it a no-brainer. I've gotta look at him like  a mechanic. He's qualified and who gives a damn if he's as personable as a rock? I'm being GIVEN a place to stay, replete with beautiful art, and post-op care courtesy of her in red on the chaise.

We had to go back in to find out about the cataract. His notes indicated it was too mild to bother with. At least he'd noticed.

The title of this post is a phrase frequently encountered in Dav Pilkey's Captain Underpants series.
I like it so much I use it whenever occasion arises. It happened this way....

Many years ago, when I realized the gallery wasn't gonna be able to support us, I began a campaign to entice Ms. Cook (Double El) into doing childrens book illustration. To foster enthusiasm, I resurrected a childhood pleasure: story time.

We'd load up on library books and trade off reading to each other. I'd read one; then she'd read one. We'd usually go through four or five a night. In addition to the pure pleasure of the activity, we enjoyed the variety of techniques of illustration, all the while making careful note of the layouts, numbers of pages, their sizes, etc.

At some point Michelle discovered Dav's books. She immediately recognized and related to his experience. And his perspective brought much light and hilarity to a period that had been, to say the least, difficult.


Images can't be downloaded, but here's a link to the original on Amazon...


The link below is to a presentation he gave to teachers titled: My Favorite Teacher. Although it doesn't include his iconic phrase, it conveys something priceless about creativity,.


Interestingly, another of Cook's observations was about a Russian immigrant who said the only two English phrases essential to know are: "Thank you!  and  "I'm Sorry."  Dav must've known that guy too.
Posted by MFH at 3:47 PM 3 comments:

Although it SOUNDED as if it was around the left front, I wasn't sure.

It'd started a few weeks ago.

Trini thought he'd found it when he put in the new catalytic converter...a loose sleeve off the manifold. But there it was AGAIN as I trundled out from the forest north of Williams. It's a rocky area and even going sllooooowwwly it was noticeable.

Several days later, having crossed the Mojave, scrutinizing the brake pads through the wheel, I saw that one was loose. That HAD to be the noise! Figuring I'd get to it in the next few days, I ignored the LOUD voice in my head telling me to stop in Needles for new pads.

Then, while rolling backwards to a more level spot in front of the monolith in Jawbone Canyon, I heard something hit the ground.  Simultaneously, the brake pedal went past it's usual point. That pad had sought freedom and, as I soon discovered, was lying there, on the sand, basking.

Grateful it hadn't happened in traffic, I spent the evening putting it back together. But there was the nagging sense of something not quite right.

Lo and behold! The California City Autozone had the pads in stock! I made it across the highway, but at the stop sign on Roger's Road the pad bailed again. We made it to Autozone without mishap, using just the emergency brake. It takes longer to jack the car up than replace the pads.

But Al did an AMAZING job of diagnosing (and FIXING!!) KC's problem the other day.
Posted by MFH at 3:43 PM 1 comment:


Each "trip" has its own Marker.  Last summer it was a pair of sunglasses that had multicolored pixie dust embedded in 'em. They, like many before them, disappeared into the ether, but for a while I enjoyed the reactions from the Bud Light boyz.

This year is distinguished by a custom-made chairbag. Melissa McDonald, the young woman who put the gussets in my pant's legs, picked out the fabric -- something, I requested, that wouldn't get lost -- and put it together. 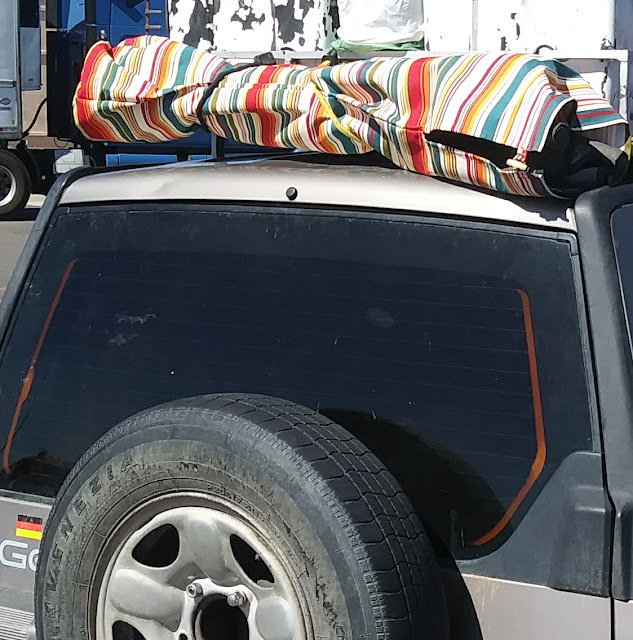 Check out the button closure.... 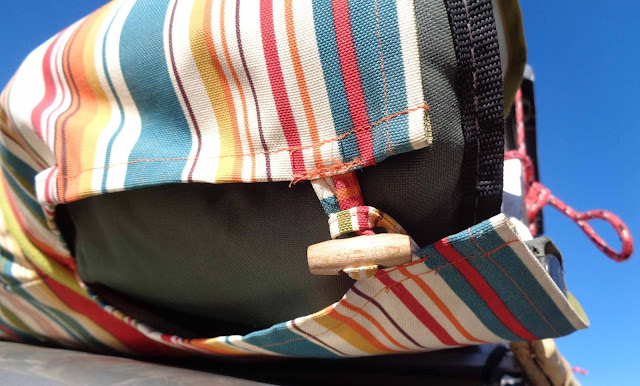 
The envy of Overlanders the world over!