Perhaps it's the webs they weave; or their frequently pugnacious character (tho tarantulas seem almost apologetic). Perhaps it's a projection prompted by my ten-month-pregnant abdomen that sprang forth after my thyroid conked out.

Each day the web gets blown away. By the following morning, for the past four or five days its been renewed. 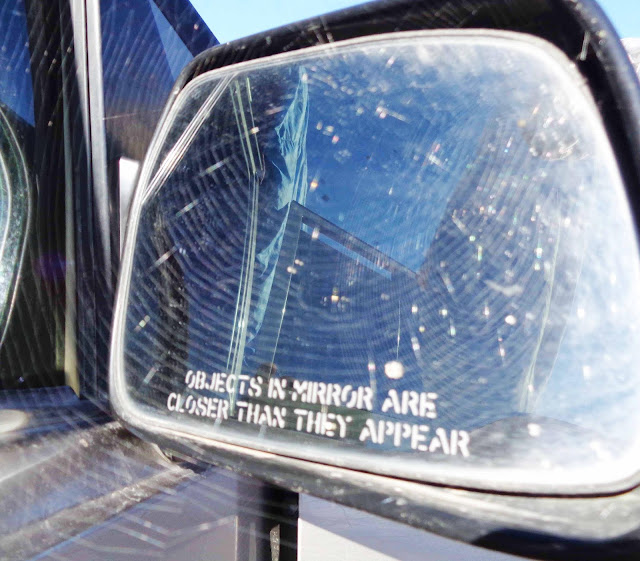 Tonight I got a glimpse, but it took shelter behind the mirror when I accidentally (Dumkopf!) touched the web while trying to get a portrait.
Posted by MFH at 6:00 AM No comments:

If nothing else, skip to the end. Heath's reply to Alyssa in their last "exchange" (in the video) says it all!

https://heathandalyssa.com
Posted by MFH at 6:30 AM 3 comments:

Both Sides Now...well, in a few days

A couple of years ago I got off the freeway to pee. Whilst zipping up, a fellow stopped and asked if I'd been up the road. As we learned from the trial of that basketballer, always best to deny it; I did.

He said they'd gone up to see the train and I should too! Ever eager to heed advice, I went.

The next encounter asked if I'd seen the thatch-roofed yurts on stilts along the edge of the bayou. He added that the water came halfway up the cab but they'd made it across. (The tales people tell!) But it sounded intriguing. Somehow I got lost and, running low on fuel and supplies, had to go back.

Then, I ferget when hit wuz perzackly, she and I spent several days a few miles north of the Intrastate 'miring the scenery. But we never got much further.

This time I hope to make it through to Caliente. THEN, having discovered how differeny everythin' looks when coming fum duh udder way, I'll return by the same route. 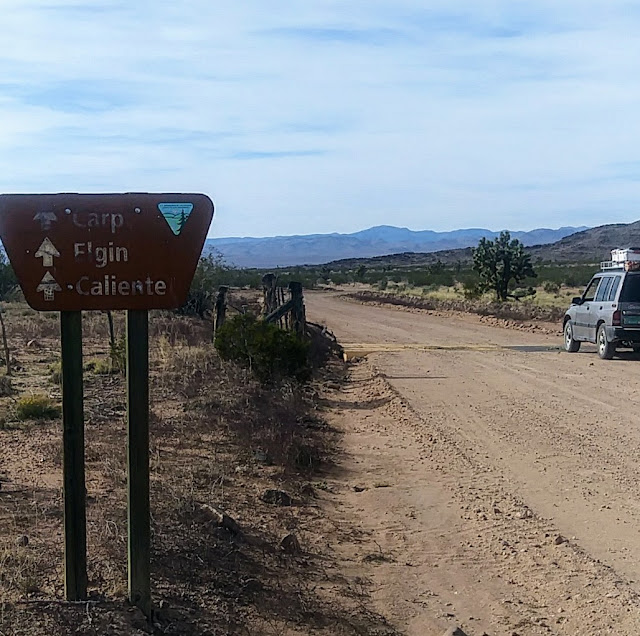 At 12:18 a.m. the moon is almost directly overhead. I've tried to notice where the moon's path is in the sky (did I tie my shoelaces?) and tonight it's about one degree south of overhead and even less than that from the "center" of its travel. It would appear to be an equinox.

I'm camped at the east edge of Mormon Mesa due east of Overton, NV. I'm curious to know how far north and south one could be and still have the sense it was passing directly overhead?

And how often does the phenomena of it reaching the zenith at midnight occur?

And how often does the moon's equinox coincide with it being full?

THIS is what you get when you live "outside." 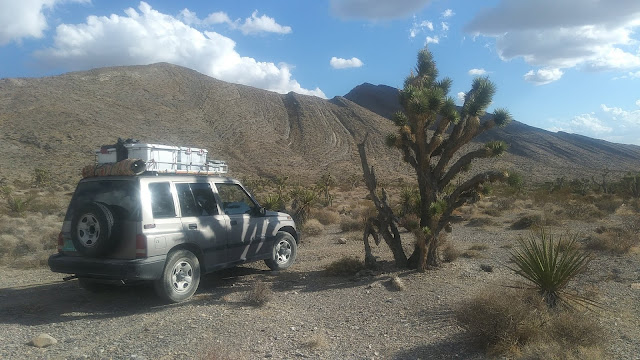 The longer shadows are comin' tuh win us, hold onto your shooOOOorrrts.

But the soul of nobody knows....

Hobo Johnson and the Lovemakers

It's been 26 years I've had the pleasure and benefit of Ms. Cook's discerning eye. Herewith her most recent find...

On September 25, I wrote about meeting Erin and Brett at the Henry Cowell Redwood State Park. I didn't know they had a blog, let alone that they'd mention me. Following the link from their "Thank You" comment on my blog led to the discovery.

The link below is to their blogpost in which they mention our meeting. Apparently, I was so shocked to hear their dad had died I had to ask again why he and their mom hadn't made the trip.
https://21hoursin3days.blogspot.com/2018/10/day-2-martinez-ca-san-luis-obispo-ca.html?m=1

A brunette, with a pixie cut, she leaned in close and said the words below. When asked, she very sweetly agreed to memorialize her insight.


Braille at a driveup ATM 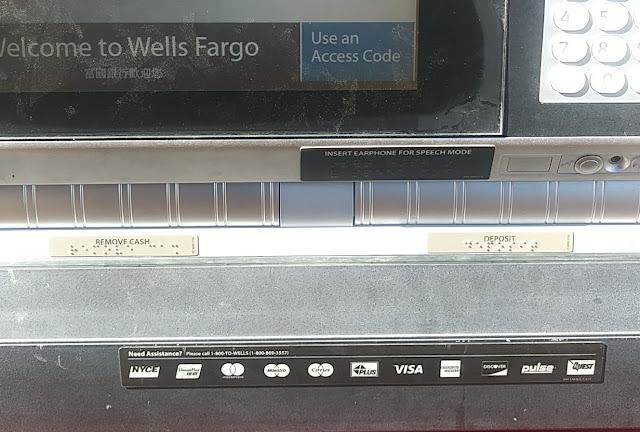 Can u see it? Under REMOVE CASH and DEPOSIT.

Somebody 'splain this to me...not.

Audrey in Benson said they're supposed to get two inches of rain. And Suzan in Ajo said they were expecting the same and that interstate 5 was closed in places from flooding.

It's cloudless and 75 with a nice breeze here by Independence.

East Side of the Sierras 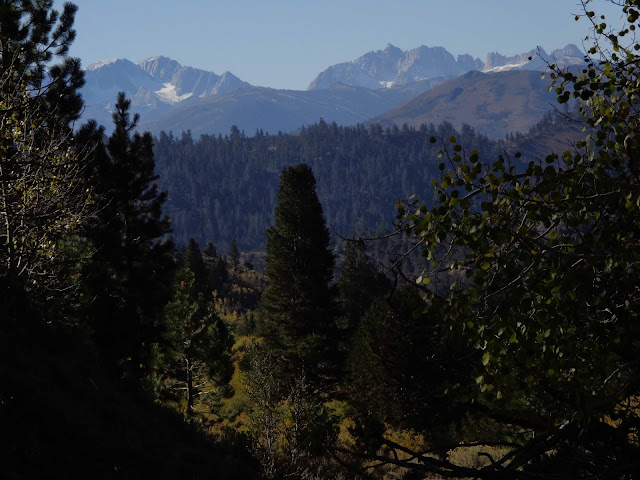 UPDATE 6/13/20
For many years helium was by touted (by the now-defunct Hemlock Society) as the most accessible means. I tested it in 2014 and it felt like having a hive of bees lowered over my head. I think the feeling was due to a numbing effect. In 2015 I tested carbon monoxide by lighting the two burners of my Coleman stove inside my Geo Metro hatchback, the car I was then traveling in. It was winter and very cold outside so the heat was welcome. The gas was a very mild soporific that induced only the slightest of pressure in the area of my frontal lobe; not enough to even begin to call a headache and barely noticeable. But it took two weeks for my mind to fully clear. Most recently, in May of this year, I tested nitrogen. It is extremely fast and very gentle...no side effects at all. I only took four "whiffs" but that was enough to narrow my vision and bring me to the edge of consciousness. It took about 20 minutes for the acute effect to wear off and about 24 hours for it to completely "clear."

I recently finished reading Dr. Nitschke's autobiography, Damned If I Do. I can't recommend it enough! It's an excellent tale of his (and his partner's) courage and willingness to help others. Dr. Nitschke seems to prefer carbon monoxide. In the interests of testing, I ordered formic and sulphuric acids from

a supplier of the two chemicals needed to produce CO.

When my order didn't arrive I contacted Dudadiesel and was told they automatically cancel orders that include both. Be advised.


In December of 2017 I turned 65. As a gift to myself I bought a subscription to The Peaceful Pill Handbook.  The subscription includes a monthly newsletter from EXIT International.

I had a vasectomy at age 22. Although I suppose I MIGHT have been able to do the job myself, I did not have the necessary license to obtain or administer the anesthetic. And even if I had, I still lacked the coordination and certainly the expertise. it was much easier to pay someone.

The surgeon was surprised at my youthful age and asked me several times if I was sure. But there was never any question of my legal right.

Now, as we enter our "twilight years," many of us and/or our loved ones face the possibility of criminal prosecution for simply being present when someone ends their life.

This Vimeo video, found through EXIT's newsletter, does not address the problem of legality, but offers a means to those who still have the necessary functioning. No license required.

Eastward Ho! Arnold and The Sheriff

According to Google MAPS, it's three hours from Menlo Park to Arnold. I used 7.

The Sheriff woke me at two (a.m.) to let me know there were alot of stolen cars being left in the area. After about 20 minutes he and his partner went on their way. Unperturbed, but fully awake, it was 5 before I got back to sleep.

In the morning I was tired and had to skip the 25th Annual Grape Stomp & Street Faire in Murphys. But I managed to get packed and spend a pleasant hour in the late afternoon visiting with Kenn Louie.

Less than five miles up the hill, not much past Calaveras Big Trees State Park, the temp began dropping. So much so I came back down.

Not much dispersed camping in these he'ar hills.

The main house of our AirBnb cottage is, I'm guessing, about 1,600 sq feet, in a modest neighborhood of pitched roofs. The rather proletarian main abode's market value is estimated at 1.8M, but bidding wars are common and it's speculated it'd actually bring around 2.4.

I've enjoyed taking the winding back streets where there are still a few wooded creeks, or vestiges thereof, and the homes are architecturally interesting. Many are unique, though nearly all are in the Mediterranean style.

With the ubiquity of Mercedeses, BMWs and almost as common Teslas, I have, for the first time, experienced pride of ownership...I haven't seen even ONE other 1996 Tracker.

Dr. Lin said the incision had healed well. In celebration we decided to have pizza. Nearby was the Menlo Park station, an interesting place to wait. Next time we'll ride it.

Half Moon Bay - Cafe Capistrano and the Ritz-Carlton

I'm now embarrassed that I alluded to the possibility we'd stay at the Ritz-Carlton.

After a fine dinner at Cafe Capistrano in Half Moon Bay, we went to the hotel for an after-dinner beer.

It's pathetic...just freakin' pathetic. The decor is so bland you actually CAN'T notice it. Once past the valet parkers, our way through to the Conservatory, one of three restaurants, was blocked by a bevy of golfers!! Golfers!!! In the lobby!  Don't they have a back entrance for those people!

When we reached the lady at the podium, she informed us the tables were for registered guests, but we could sit at the bar. The tables, small little unoffensive nothings, overlooked an open area that held about 100 blue and/or black-suited males (conferees) standing around. It was a scene worthy of a David Byrne movie.

One can surmise the distant ocean may have sufficed for say, someone from New Delhi or Urgamal, Mongolia, but for us, it was, like, totally underwhelming.

Below, on the ground floor, a wooden deck held one couple. We descended to explore. Upon inquiring for something dark, (Polynesian perhaps, female please) I was snidely queried as to whether I wanted wine, whiskey or, the final option, beer, only to be told "No dark beer."

Across the open area was the golf course. At its edge a rustic, split-rail fence warned of the risk of the drop to the ocean below. But more importantly, that the green was for golfers only, not pedestrians.  In a land where every restroom exhorts water conservation, you're told to keep off the grass.

But get THIS! The Ocean View Terrace Fire Pit Rooms have a postage-stamp size patio with a gas-flame firepit. The pits are as diminutive as the patios such that a Yukoner might say they're suitable for a child.  And those, they also offer suites and cabins, rent for $2,200 (including taxes) a night.

Prompted by curiosity, I read the the "Terrible" reviews on Tripadvisor. One, from a couple who were also there today, echoed our complaints. Astonishingly, more than one had had items stolen!
Posted by MFH at 9:00 PM 6 comments:

Email ThisBlogThis!Share to TwitterShare to FacebookShare to Pinterest
Labels: California, Half Moon Bay

We were so enthralled by the stuff we went back.  Christina told how she's been helping produce the work for eight years. 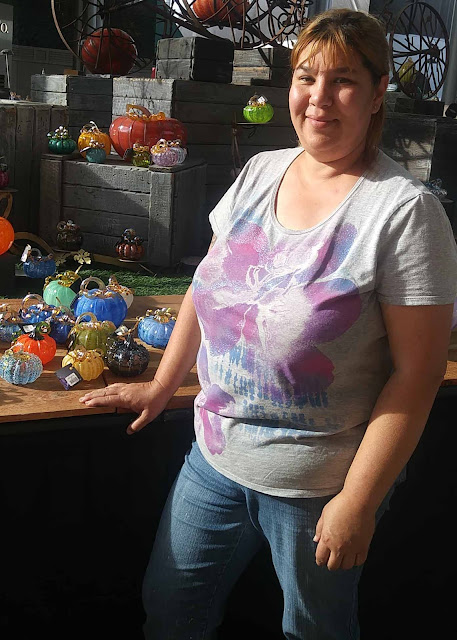 They use a mold for the basic form, but the rest is hand-done. 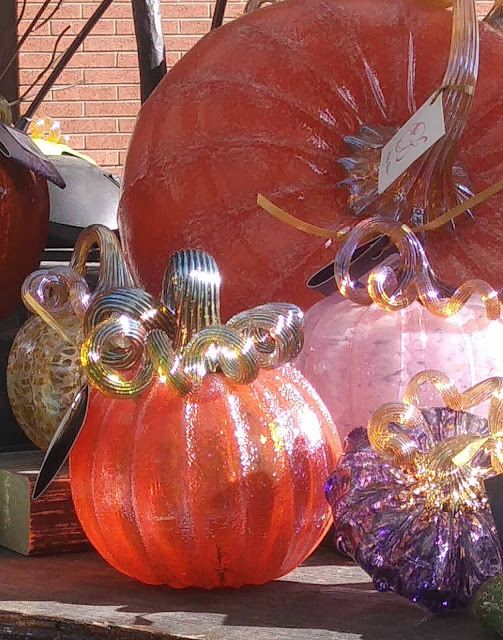 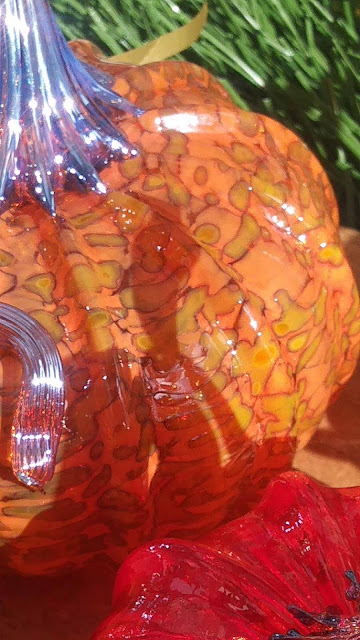 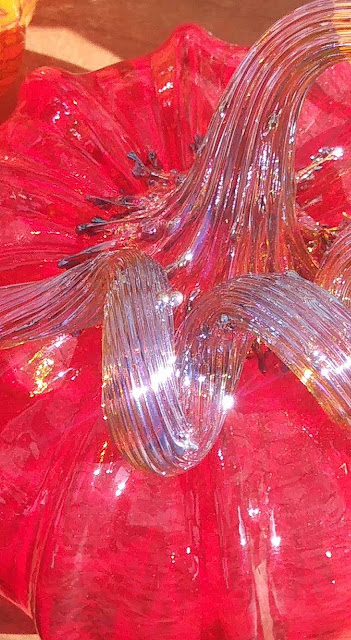 She wanted to check out the baubles at Neiman Marcus.

We started with Starbuck's and oriented to the flowers. There were large hydrangeas, pansies, and many others. Sitting on the bench discussing the particulars of titillation, doing our best to contain ourselves, the expressions of intimacy were almost inappropriate. But Palo Alto is SO conservative.

Fortunately, I saw this picture before we got to La Baguette so the required act of noble self-sacrifice wasn't quite as difficil. (photo pre-surgery....still wearing glasses.) 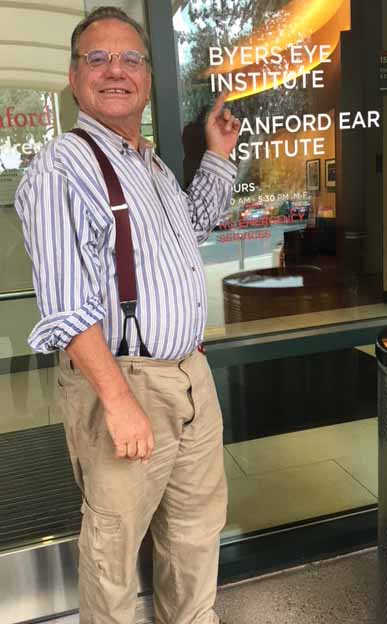 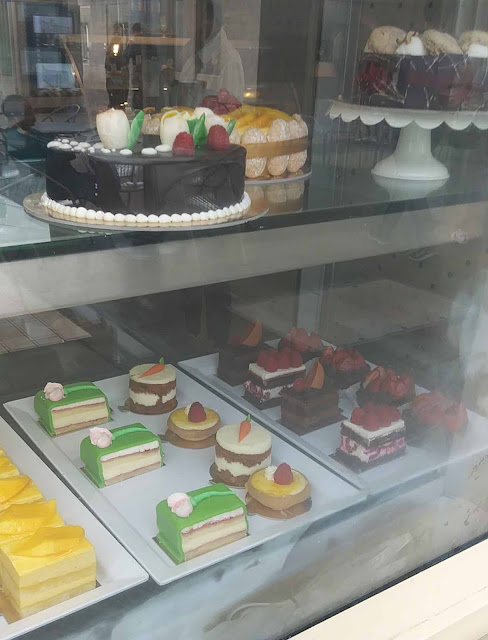 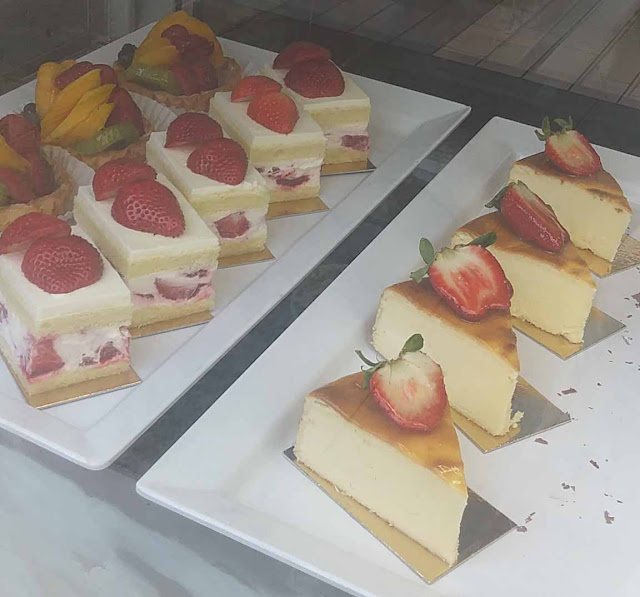 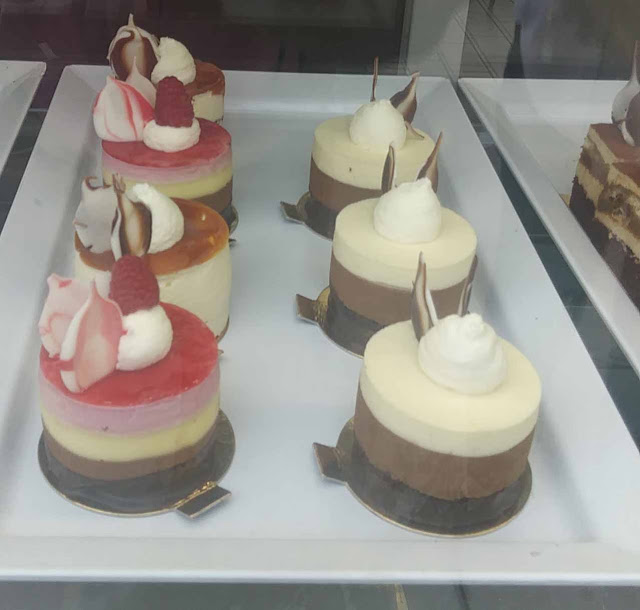 I expected creativity to go with intelligence. Not so. The REI look is totalitarian and as ubiquitous as the Range Rovers. EVERYONE is wearing khaki shorts and gray t-shirts....same as the poor slobs everywhere else.

We've attained satiety, for the moment, enough for a jaunt to Half Moon Bay.

This AirBnb is surprisingly affordable.  Although the place we're in is cozy and the squirrels are amusing, the skylight is filthy, the drawer front to the silverware is falling off and I had to peel the label off the glass candle. I HATE it when they don't pay attention to DETAIL.


If the AriBnb doesn't work out, the Ritz-Carlton'll just have to do. 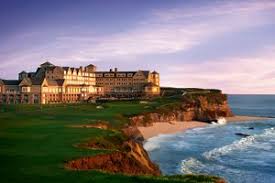