I've kept trying larger tires to get more ground clearance. James advised against the 235s though, saying they were made for a 9" wide wheel and mine is 5 and a half.

I'd finally had to put on the spare when the Trailer Kings wouldn't hold a plug in the sidewall. I was then running three different sizes. It was time to bite the bullet. $590.00 later... 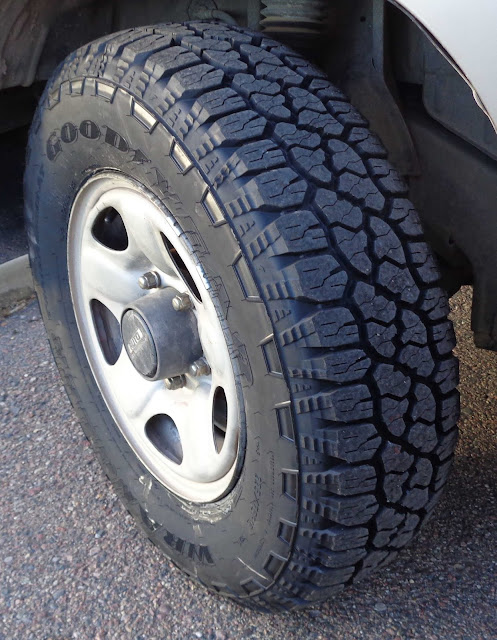 
Thanks James. It's great to find someone who knows their stuff! 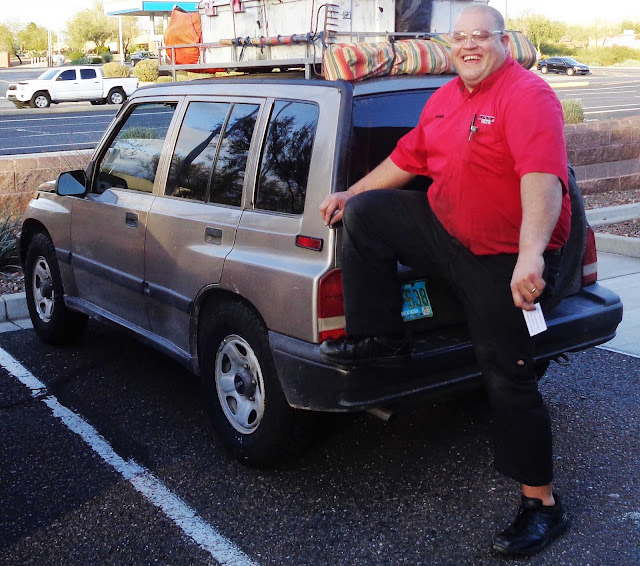 
“Your vision will become clear only when you can look into your own heart. Who looks outside, dreams. Who looks inside, awakens.” ~ Carl Jung

https://newmexnomad.blogspot.com/2018/10/right-to-die-gulp-peaceful-pill-handbook.html?m=1
Posted by MFH at 7:34 AM No comments:

Tires have become an issue; the sidewalls keep succumbing. I tried 10-ply trailer tires but they turned out to be no better.

Piddling southward from Cottonwood, Arizona, the weather and countryside are darn near perfect. 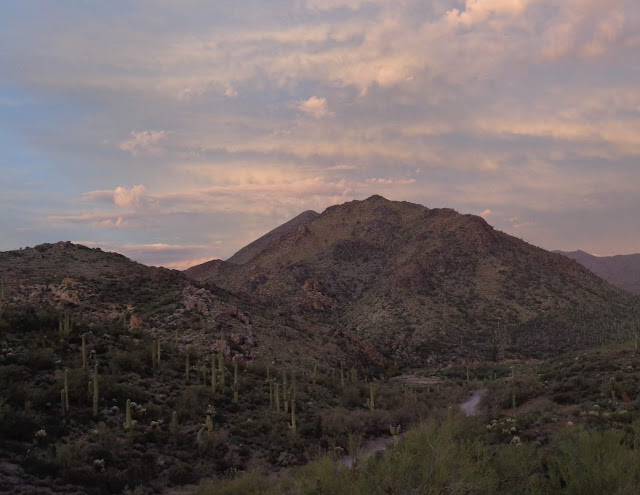 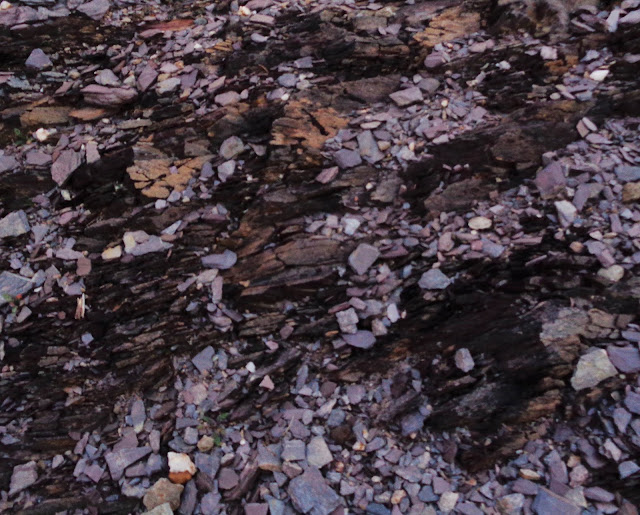 Cooper Discoverers AT3 had to be ordered but are expected to arrive today.

Email ThisBlogThis!Share to TwitterShare to FacebookShare to Pinterest
Labels: tires

Marie and the Aortic Aneurysm

We met online a decade or more ago. Our conversations were always fun, but after a while we'd drift on. But we kept bumping into each other here and there.

Last summer I stopped in for a visit. We grilled steaks and, both of us being of low-stamina, an hour and a half was enough.

In October, anticipating being near,  she let me mail some books to her house. Whim had its way and it wasn't 'til this past weekend we got together.

We share an appreciation of art and clouds and went to see the sky and galleries in Jerome (Arizona). On our way down the hill some deer stepped in front of the car. We stopped, but the guy behind us didn't.

X-rays indicated no mechanical damage, but there, clear to see, was an abdominal aneurysm on the aorta (in me, not her). In 2013, when Wiki last checked, aortic aneurysms accounted for 150,000 deaths, mostly guys. It's only 3 cm (size matters) and may never be a problem.

But it's funny, Kenn Louie lost some of his (right) leg over the last month; the cancer's taking him bit by bit. (If you look closely at the image in the link above, you'll see his left leg is all wires...a prosthesis.) But he's indomitable and annoyed at being bed-ridden; while waiting to heal from the surgery he can't work.

I, on the other hand, had started to worry (too much free time) about how I was gonna get outa here. It was a heated debate:  Revolver's handy; nahhh, a shotgun's for sure. Either way quick, but oy vey, such a mess!

Now I can relax. Of course there're (I know, I SHOULD say there's...to be up with the times.) no guarantees, but at least I now know I have a decent chance. I just hope it doesn't happen while I'm driving. Hmmm, a chauffeurette?

It's interesting, isn't it, what the season evokes?

Just back from Japan and soon to leave for Germany, we went to Chicago to visit relatives. Up until then I'd known naught but classical. These two *still*  haunt.


It's a full moon. And at Cottonwood, Arizona it's about 2 degrees South from directly overhead. Wha'sitlooklike whereyouare? Prolly round...like cheese.

To Awaken Quite Alone

's list of notable qoutes, my attention was caught by Dame Freya Stark's: To awaken quite alone in a strange town is one of the most pleasant sensations in the world.

I just ordered her biography by Jane Fletcher Geniesse, so can't yet commend it. But isn't it interesting that the first overlander to the Mideast was a woman?

Although it's a ritual to note the stochastics, my purpose has been -- all along -- a crutch for my failing memory...a handy reference as it were.

It's been a more-pleasant-than-usual visit. Ms. Cook is lovely as ever, and the three days at Cabezon were Tony-the-tiger GRREEEEAAAT!

Debate continues over The Netherlands for psilocybin to clear the cobwebs; Baja, Mexico to weather the weather, or Portugal and parts south for pure adventure.

The Last of Its Kind
Nearing the Foothills of the Sandias 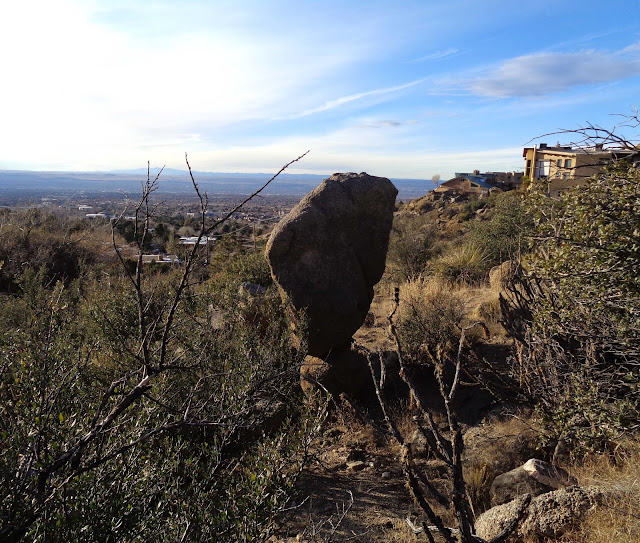 The hump at the horizon with the two twigs in it is Mount Taylor, one of four of The Puebloans' sacred markers. The San Francisco Peaks at Flagstaff are the West marker.

Email ThisBlogThis!Share to TwitterShare to FacebookShare to Pinterest
Labels: Albuquerque, Cabezon, The Netherlands

Once you've bought all your stuff, there's NOTHING to do.

I was sitting in the Walmart parking lot on the phone with her about family issues. Suddenly, with indescribable insouciance, this yellow MG Midget appeared....flying a Day-of-the-Dead Jolly Roger. 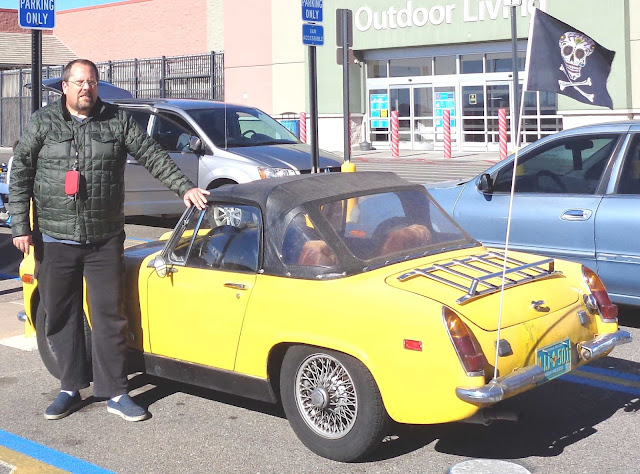 The contrast to the conversation made me laugh out loud and prompted me to exhort Jim, the car's owner, to re-enact the event.

As mundane as the video is, I encourage you to imagine the contrast between what was happening on the phone and watching it go by.

http://brewedjourney.com/
Posted by MFH at 10:45 PM No comments:

The first evening a herd of cranes, flying high, went by. Their hailing reminded of a crowd of early-morning revelers staggering homeward. They WERE southbound.

The BLM sign says there are over 50 volcanic plugs in the area. They erode much more slowly than the sea-deposited sediments left eons ago. 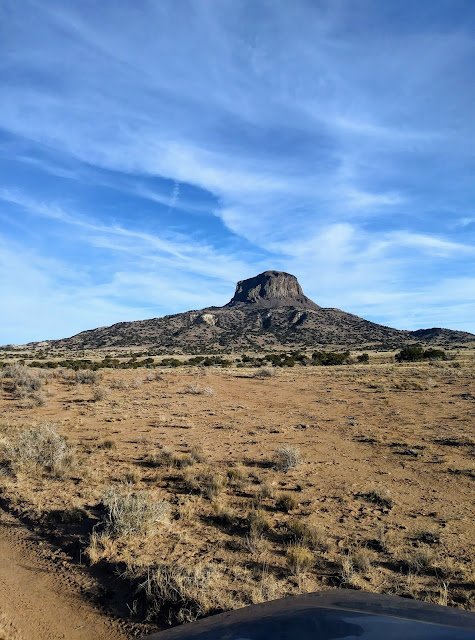 The 5-gallon jugs froze nearly solid, but the Wave 3 catalytic heater keeps the chilblains at bay.

Some wine and Thurber's Lanterns and Lances make for fine evening's entertainment.


And in the faaar distance you can see the Sandia Moutains that rise 5,000 feet and provide the backdrop of Albuquerque. 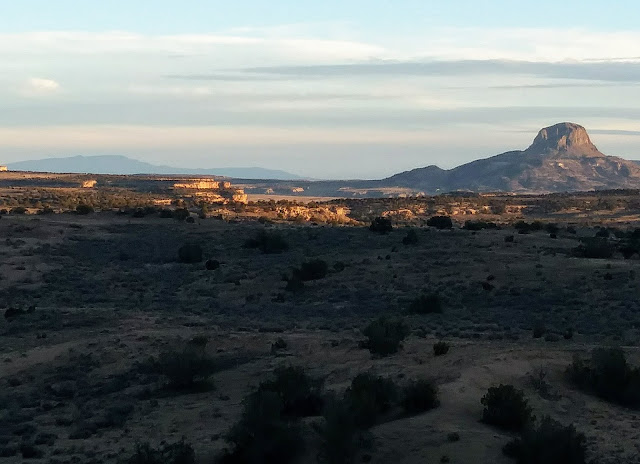 Oct 11, 2016, at 10:03 PM
>
> Princess,
>
> As thou lyest in your beloved's arms,
> with the joyous ache of desire
> and the slippery wetness of anticipation
> lending renewed energy to your embrace,
> Know that I too look forward to your
> presence
> be it naught more than the closeness to share
> your thoughts.
>
> To reassure I have no expectations,
>
> Sweet Dreams
Posted by MFH at 7:24 PM No comments:

I wended my way via the back roads, we live in the Northeast Heights (Frights), down to the Nature Trail that parallels the Rio Grande. Just before the junction was a tree-lot with two Hispanic guys keeping watch. (What with one thing and another we've not had a tree for several years.) Their smallest was $45.00, but he let me have a foot-and-a-half one, perfect for us, for $15.00. 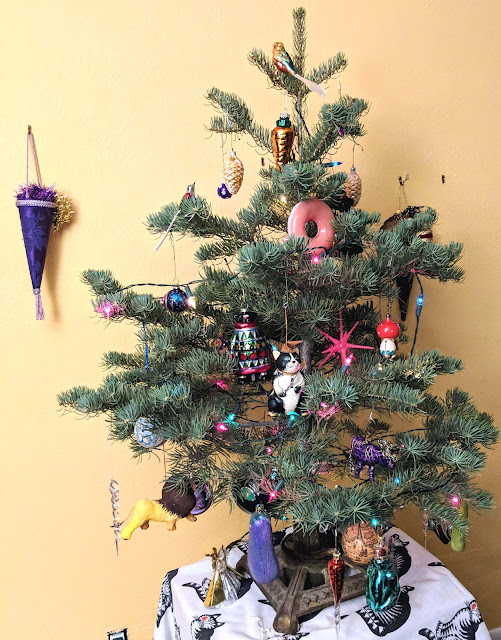 Michelle did ceramics for about 15 years. This was from 1998. 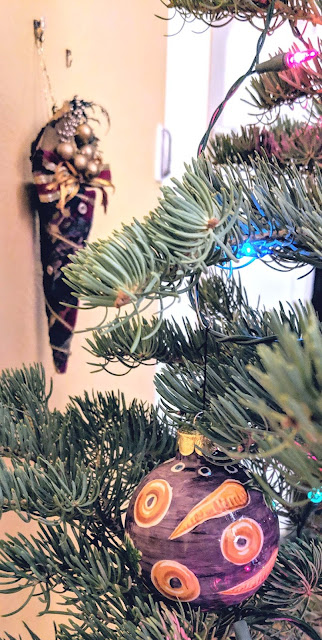 Sophie, my cat, a mergers and acquisitions specialist, died in 2010. Michelle did her portrait in 1995. 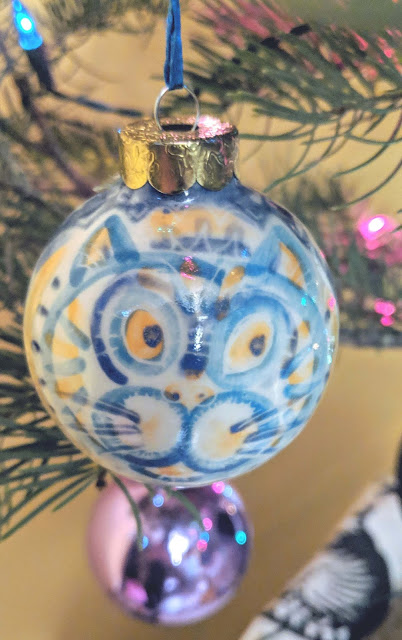 Mushroom from my childhood. Pink star from Dillards Department Store back when One El and I were Marketing Executives at UNM Press (late '80s). The Wizard Cat was a gift from me to Double El; undated. 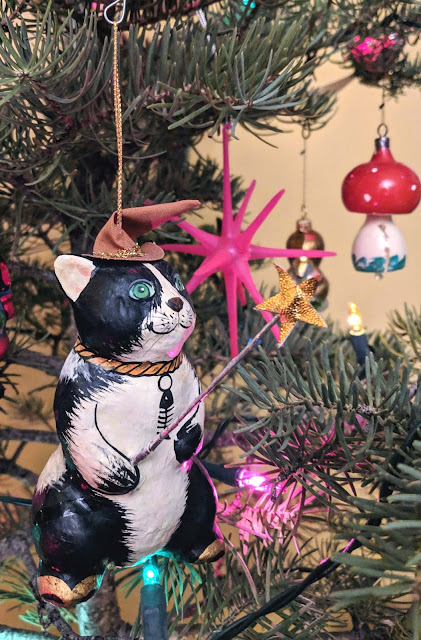 Devout agnostics, when One El and I met in '86 she was still fresh from a medieval choral group in D.C. that sang a cappella. She has a beautiful voice and unselfconsciously accompanied many of the carols on the first selection below.

All of us are ornament enthusiasts. This year we're drawing from Double El's and my collection. Donuts! Carrots!

Classics; you'll likely recognize them all.

In the last couple of days I've gotten a couple of interestingly worded comments on the Worlds Fastest Auburn post.

Merry Christmas,
You are so interesting! I don't believe I've truly read through anything like that before. So wonderful to discover another person with a few unique thoughts on this issue. Seriously.. many thanks for starting this up. This website is something that is required on the internet, someone with a bit of originality! If you want to readmerry christmas quotes for coworkers you have to see the link
Thank you,

The link to merry christmas quotes is a list of poorly translated politenesses that have, to my inexperienced ear, tones one might attribute to Asians.

Thank you. And Happy Solstice to you!

Hi,
The very next time I read a blog, I hope that it does not disappoint me as much as this particular one.New Year Greetings For Business I mean, I know it was my choice to read, but I truly thought you would probably have something useful to say. All I hear is a bunch of crying about something that you could possibly fix if you were not too busy searching for attention.
Thanks

Wow Zeeshan! Thanks for sharing your thoughts.

I didn't bother to check out the link in today's comment, but you'll notice the change in the close and associated punctuation; they shortened to a simple Thanks and left the comma off.

I'm curious to see what they'll say next. Anyone else seeing stuff like this?
Posted by MFH at 7:05 PM 2 comments:

It's wonderful to walk into a huge room full of incredible expressions of creativity. And I admit to an unusual level of comfort in the company of artists. But the phone's camera wasn't up to the job. 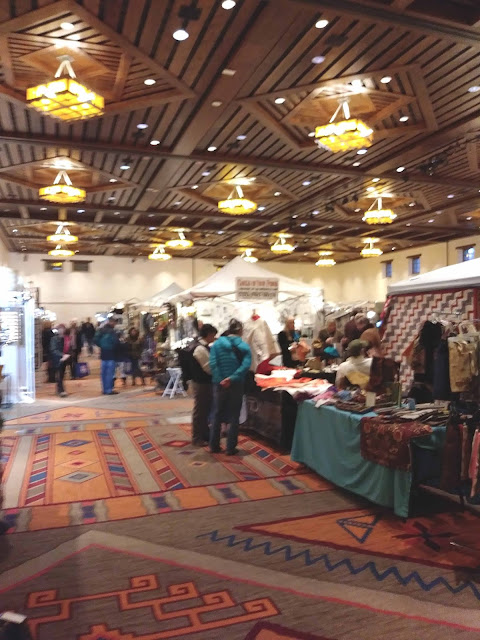 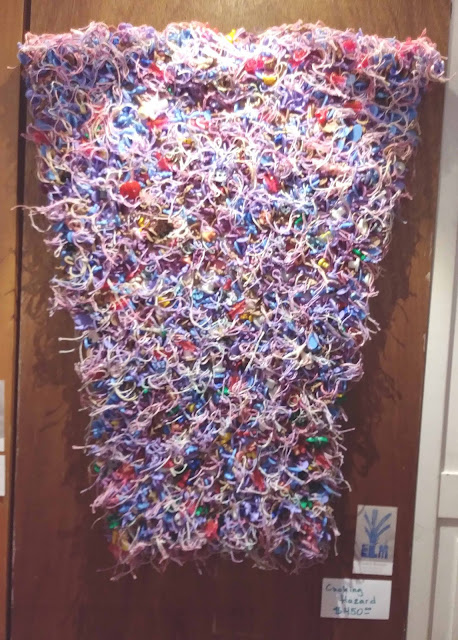 Bowl fashioned from curlers
(by same as above) 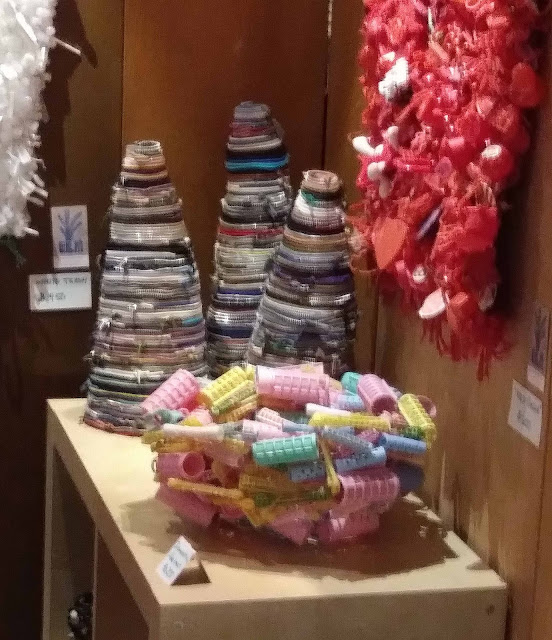 Coquettishly behind, is one from a flour tin 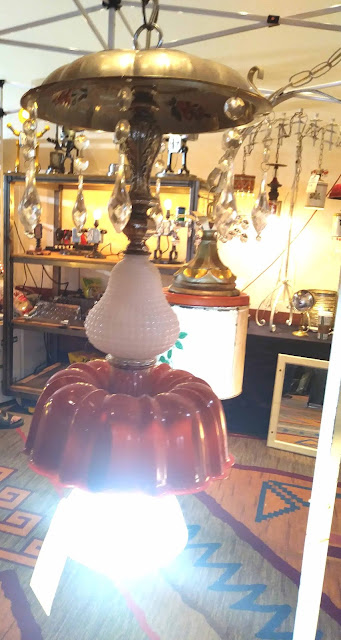 The leavings from an auto-serger (on her sewing machine) were used to create the dog's fur. Found styrofoam for its body. 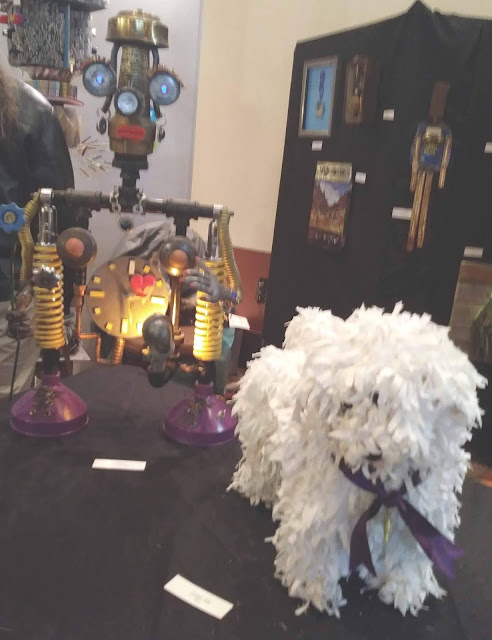 The form is bicycle chain; the seated figure from wire and oddments. 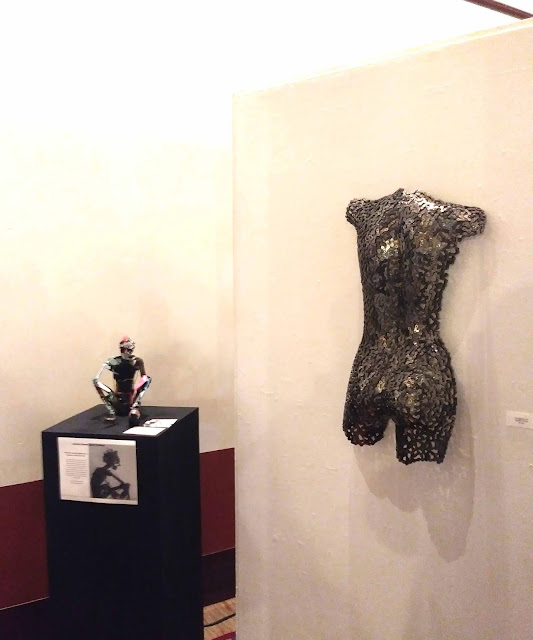 This three-foot long piece was suitable for display out-of-doors. She uses old cans, roofing tin and similar and works them by hand with hammer and anvil. 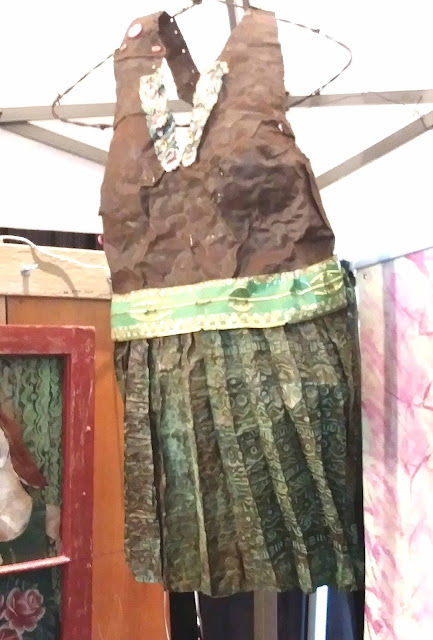 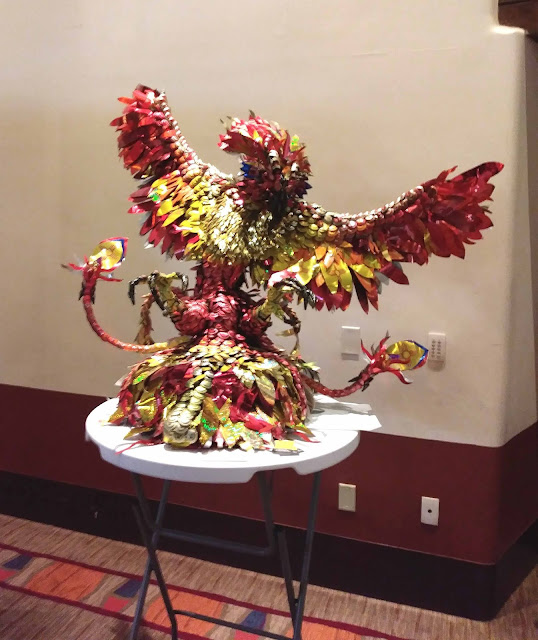 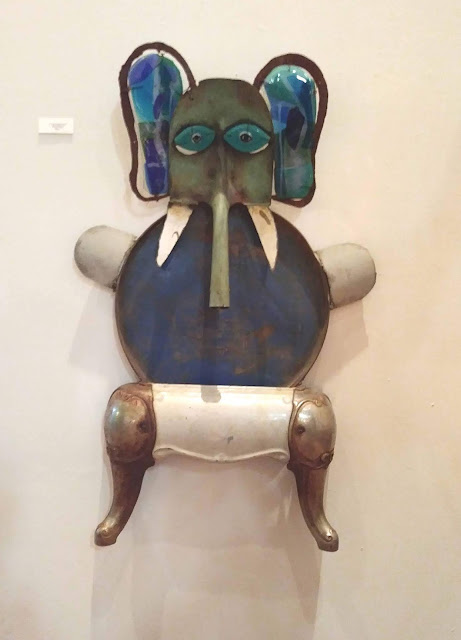 Today, December 1, is her birthday. She TOLD me not to get her anything and, as luck would have it, there wasn't much to be had.

I'd forgotten my birthday is this month too, but she hadn't. I'd worn the pink plaid flannel shirt

she gave me years ago to a rag and, back in September, asked for a replacement.


And Mr. Stomach thinks it the perfect enhancement. 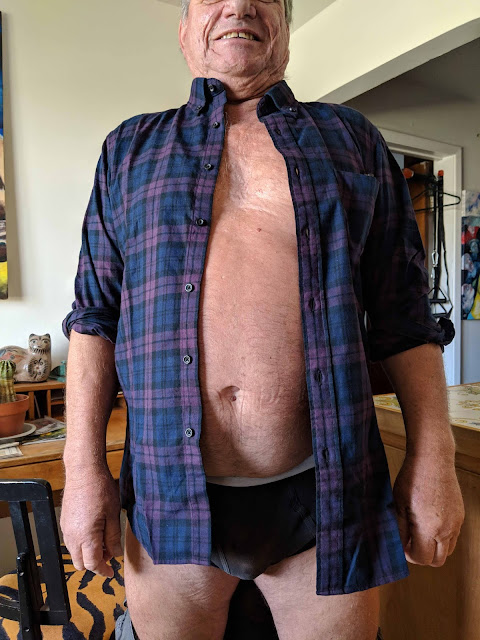 There's an ancient saying that god would be recognized by the mole in his navel.

But the thing that truly (once again) let me know our love is boundless is this clay figure. Originally intended to celebrate our silver anniversary in 2016, she began work several years ago. (We've never liked to rush things.) 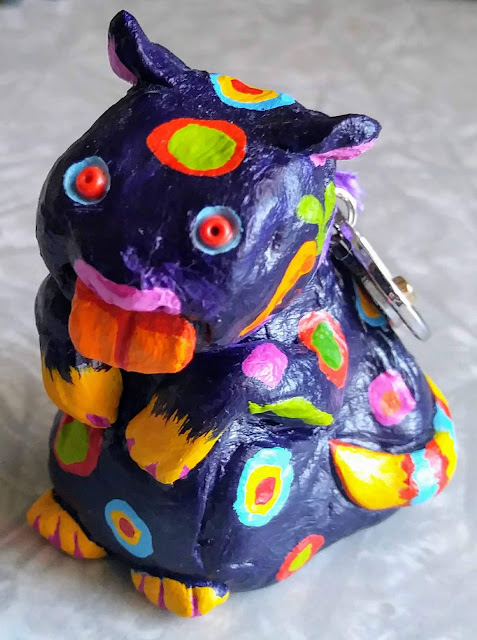 As mentioned in prev posts, we adopted the Nutria as our fetish animal; their shape being similar to our own. Added characteristics include our shared enthusiasm for doughnuts.


In the image below, you see the iconic posture assumed when "skenting donuts." Pronunciation of the word scenting changed after a young lady came to the door one day selling Skented Candles; I had to ask several times what she was referring to before the light went on. It lends a nicely-nuanced tone to the proclivity, don't chew tink? 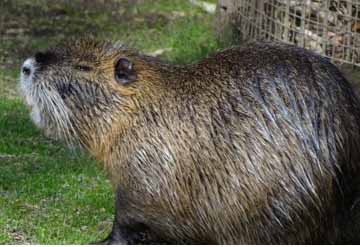 It's A Carrot (and donuts) 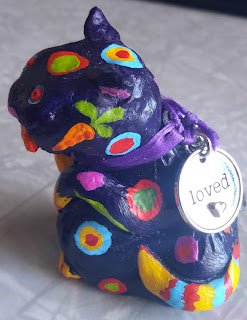 In my teens I read Waiting For Godot and adopted the carrot as my leitmotif (see: 2:42 in the video). Initially, I interpreted Estragon's reply: "It's a carrot." as a Buddhist-esque aphorism meaning: It is what it is. Later, it morphed into the carrot-on-a-stick used to entice mules. My company's name -- IAC Contemporary Art -- is based on the sentence (IAC = It's a carrot).....contemporary art being my motivator. 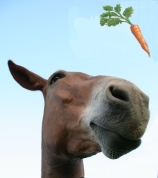 
Sesame Street's play on The Play....

Ignoring all the above, we took up the Freudian vein and recognized the perfect fit of doughnuts and carrots. A single carrot must be balanced by at least a dozen doughnuts. She turned 62. I'll be 66.
Posted by MFH at 7:16 AM 1 comment: