Dolores. A name to inspire memories. The grocery has Vigo brand rolled anchovies with capers; Midnight Moon goat gouda; an assortment of chevres and bries; a cold case stocked with a variety of made-in-the-store quiches, baked sirloin roast; lasagna and other delights. The meat case looks fresh enough to eat raw and there's Ducktrap (wildcaught in Maine) Herring in wine and/or cream sauce and the WSJ & the New York Times !! And open, fast wifi !! And the pies!!!! (see comments)

There's water in the city park at the south end of town, but for drinking I recommend the water/ice dispenser across from the Riverside Convenience store....$0.25/gal.

The people passing through are from all over the world. It's a jumping off/resupply place the likes of which are rare -- the grocery in Driggs, Idaho comes to mind. Perhaps you know others?

Thanks to Mark Johnson's suggestion (Box Canyon Blog), I found cooler temps in the "hills" along County Road 38 between Dolores and Rico. It goes north off highway 145 a few miles west of Stoner then reconvenes a few miles north of Rico. Thanks, Mark! 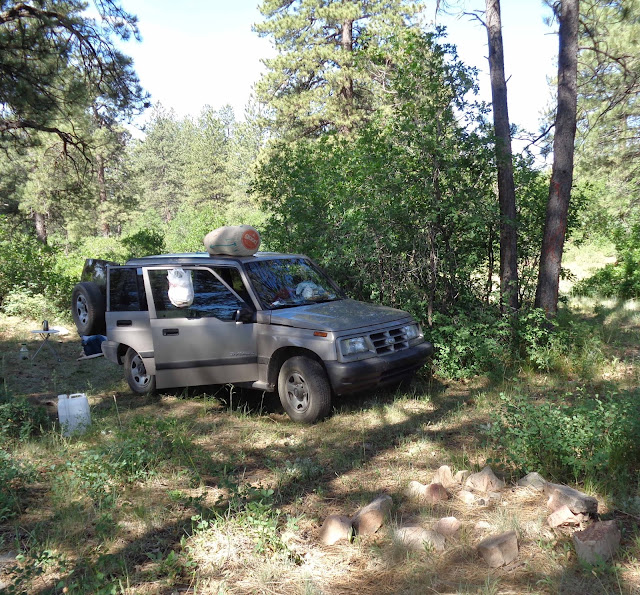 Not Fat Tire (Fat tire is a popular beer), but the one that sounds like Trixie greeting the Smirket Girls (see below). Perhaps I've mentioned, smirket is Michelle's childhood word for a black cat.

Dana and Fox (in the box) after having been "greeted" by Trixie with a long, wet Snaaaaaaaaaaaaaaaaaa!! 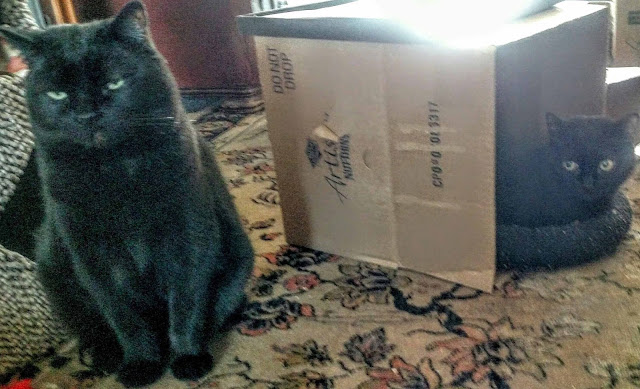 It turned out the road I was gonna camp on last night soon deadended at a ranch. It was dusk and too late to find somewhere else so I headed back up the road to where I'd camped the prev night. THIS time though I saw the sign that designated the beginning of the dispersed camping...6 miles sooner than I'd driven the night before. It all stems from the ambiguous wording that reads "NO CAMPING FOR NEXT 8 MILES (7 miles past Animas Overlook)." It's 7 miles to Animas Overlook and the dispersed camping sign -- which I missed seeing the prev night -- is a mile further. I interpreted the sign to mean you had to go 7 miles BEYOND Animas Overlook.

Then it happened. I looked about expecting to see Trixie hovering in the night sky, but as the right front of the car dipped down I realized what had happened. I came to a stop right at Animas Overlook. And even in the darkeling gloam my headlights picked out the well-placed blazingly yellow NO CAMPING HERE sign.

I whupped out the jack and other tools, put down a tarp and in less than ten minutes someone stopped to see if I needed help. I complained that my therapist wasn't answering my calls but I seemed to be coping pretty well. I thanked them and sent them on their way, changed the tire, saw the sign about dispersed camping and found a nice place.

This morning I went to the tire shop my intuition had spotted yesterday afternoon. A lady who's lived in Durango for 25 years said it's the best. She had recently bought some Nokian tires, the ones made by the Finland company that: "operates the only permanent winter tyre testing facility in the world (Wiki)." She had, over the years, been to three other places, but come back to JP's. The guy said the sharp-pointed shale cuts like a knife. Even more so I'd say looking at the irreparable, inch-long gash in the sidewall. $92.00 later -- mounted, balanced, and old one "disposed" of...out-the-door, as it's known -- and I was on my way.

On my way up to last night's campspot, before the flat (BTF), I stopped at Junction Creek Campground to see if there might be a quiet spot. While perusing the map for potential sites the C.G. host and her sidekick came rolling up in their golf cart. Beaming like a mule eatin' sweet taters, she asked if I was lookin' for a campsite. I said yeah, but I didn't like people, especially children, or dogs, or radios and slamming car doors. Undaunted, she confabbed with her partner over which sites were available and might be appropriate. Then, with ebullient enthusiasm, we went off tuh see 'em.

The first site was directly across from her 5th-wheel where I could, she said, if I wanted, charge my laptop (both batteries were down). The next, for $2.50 more, had electric...I could charge to my heart's content. There were several others, but the one that sounded the best, which she thought was available, was taken. I told her I liked the one across from her and we headed back.

By the time we pulled up to her place (it's a BIG C.G.) I'd had time to think...and realized I couldn't do it; too many children, dogs, radios, generators, people....suburb in the pines.

I gave 'em $5.00 for their patience (she said they'd put it toward their beer fund), my card, bid them goodnight and trundled off to have a flat and find the best tire store in Durango.

It's rare, in this age of gray t-shirts and khaki shorts, to meet anyone whose sheer exuberance...

After poring over the maps I settled on Junction Creek Rd. A little before Junction Cr Campground (god preserve me) the decision loomed...Forest Road 204 or 205. 204 said NO CAMPING FOR NEXT EIGHT MILES (7 miles past Animas Overlook). It HAD to be good.

Six miles past Animas Overlook I encountered Rick. He was working on his trailer and, having just finished oiling the wood and tightening the screws in the board ends, was about to lay some carpet to further protect it. Retired from computer programming, he'd bought the Bounder six months earlier; the trailer was new too.


This was a wide spot, hardly more than the length of the Bounder. I was curious about how he'd managed to get facing downhill. "It was a six-point turn", he said...meaning it took six attempts. He described how, at one point, he was trying to go back but nothing was happening. When he got out to see if maybe there was a rock he discovered he was up against the mountain.

The dropoff is like the upside, almost straight. He stamped his foot to show how he'd checked the edge for firmness before pulling up to it, but admitted he wasn't totally convinced; the fact that it'd hold him didn't guarantee the motorhome.


There was some annoyance with the Forest Service. They'd said the road was accessible to all; that there were trails where he could ride his (motor)bike, and there was dispersed camping. Well, there *was* dispersed camping, but the boulder at the 6.8 mark was a formidable impediment, even for Rick. As for trails, you couldn't hike on these hills, let alone ride a bike. 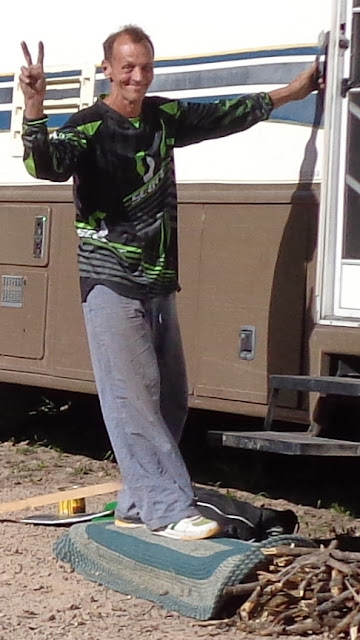 As I turned to go he said his wife had finally told him, after 30 years and some children, she'd never loved him. But, he added, he'd reached the point of being able to say it out loud so he knew he was getting over it.

I'm still wondering how he got the trailer turned around.

There's a bookstore in Durango that advertises in High Country News...or maybe I just think it does. It's a reason to stop. Anyone have any suggestions for places to see? I'm gonna mosey on over to Dolores and thence up toward Rico. It's gotta be cooler.
Posted by MFH at 6:35 PM 2 comments:


In ABQ I took Phoebe, or, The Pheeb, as she's casually known, to get her valves adjusted and windows tinted.

When Dick from RPM called he said, "The Hummer is ready." He's always chided me about the Metro's lack of power and chortled over its cumulative displacement of one liter...and only three cylinders. When I told him her name he said, "Pheobe Hummer."

As an old Marine working on an old hippie's rig; it's taken over a year to get comfortable with each other. The shop's motto is: Where We Do What We Say.

I'm here until Tuesday getting it titled etc. 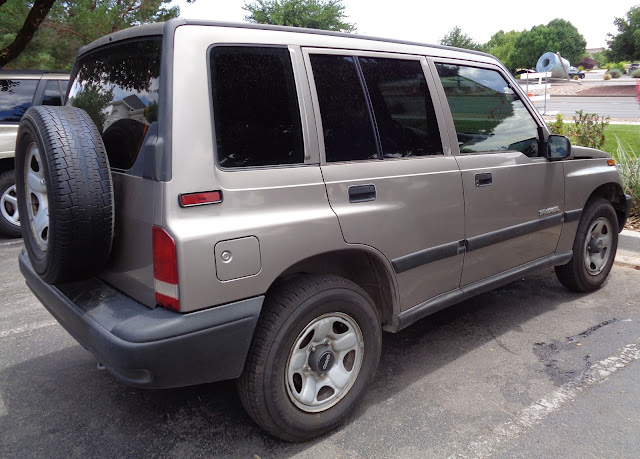 The blue cylinder to the right of the windshield is a sculpture. It's supposed to evoke the "industrial" nature of the area, but is, in fact, just another of the token pieces of crap Albuquerque uses to give itself credit for trying. What can I say...there're (or, in the vernacular: there's) more Walmarts per capita than any other U.S. city. 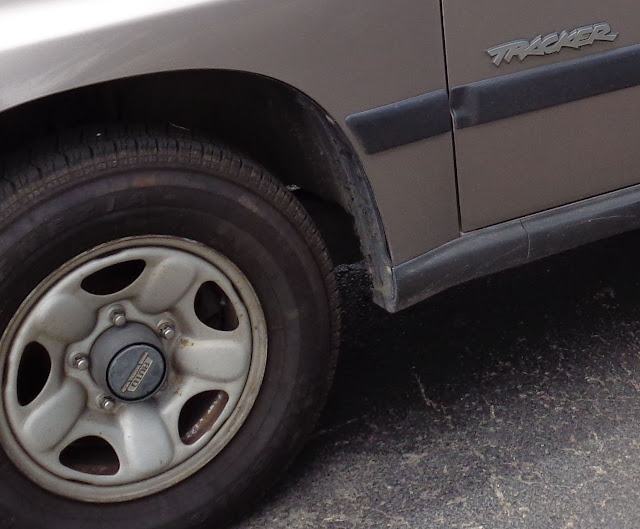 Serendipity: the custom-built wormwood maple sleeping platform I had made for Eggbert just needed to be lowered about an inch. 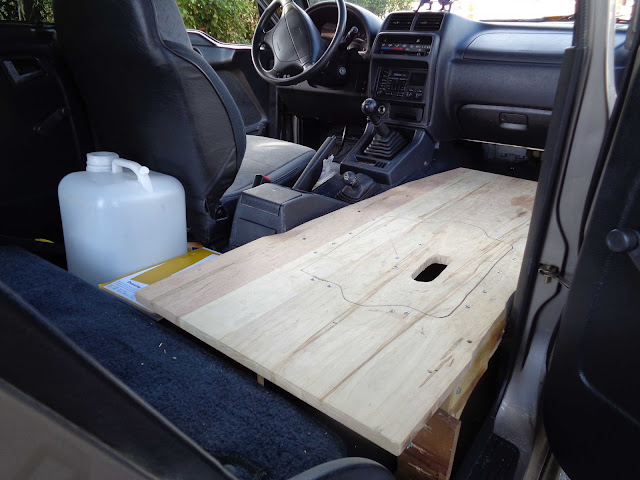 The hatch provides access to additional storage and the jack. 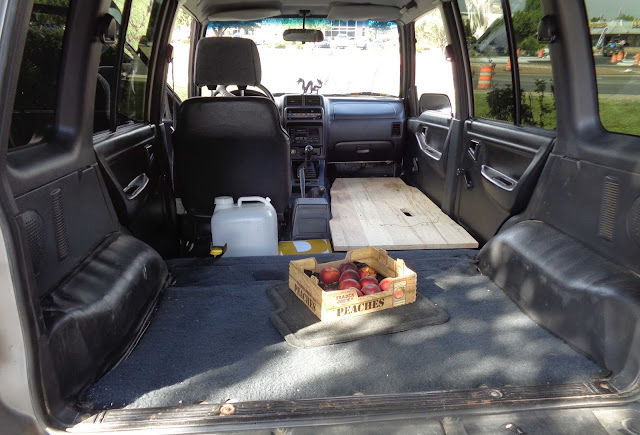 
The yellow spot in front of the jug is the bubble in the level used to get the platform juuuuuust right.

Note dragon on dash. I am, according to the Chinese historical calendar, a dragon guy. It's purple with a very "sportive" stance.