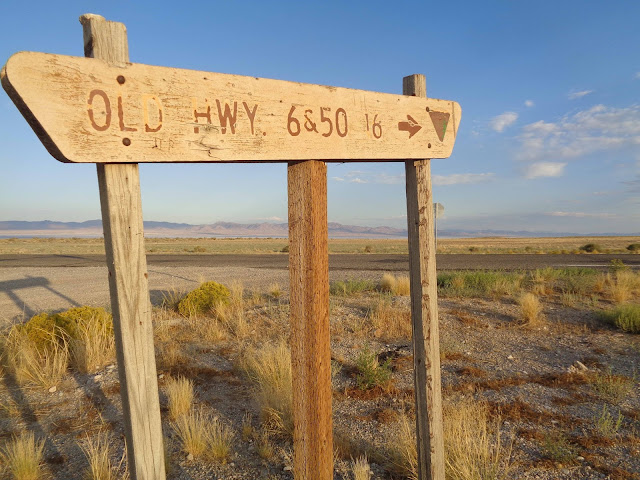 I could almost see (blind in left eye and the right one ain't all that hot, neither) the bikinied & thonged lovelies cavorting in the breakers. But first, my beauty sleep. 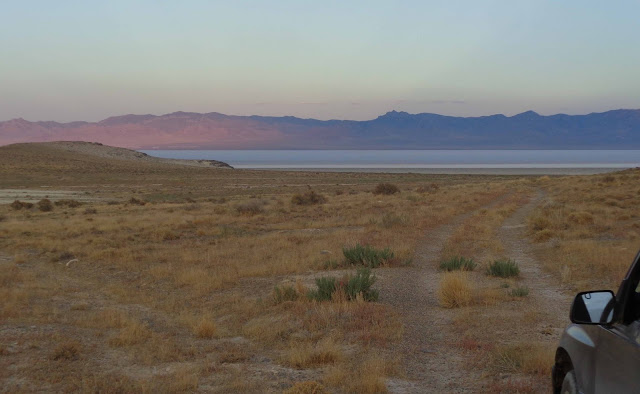 Came the morn and harsh reality. The Caribbean-blue water seen from the highway was nought more than the cloudless sky reflected by the dry, white surface of the lake. And the beckoning lovelies?....figments of yesterday's dream-time. Ah well...maybe tomorrow.

An attractive curl of mud 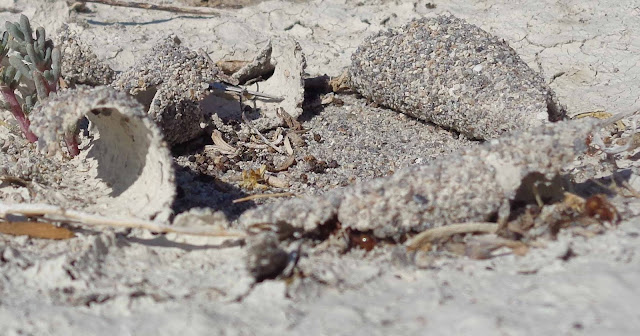 Descending from the Granites I had to fashion a loop around both sections and use the rope like a pulley in order to slip the wire off (and later, back on) the post.

The one one below came with its own lever. You pass the steel rod across the post and pull.  It took some getting used to but was ALOT easier than the rope trick. 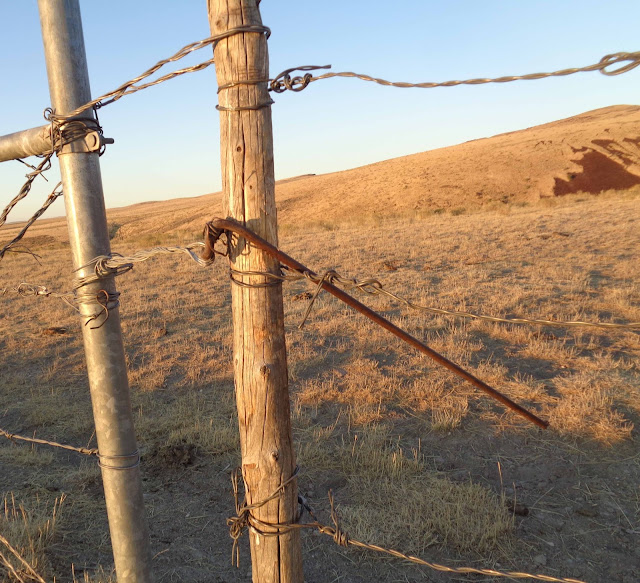 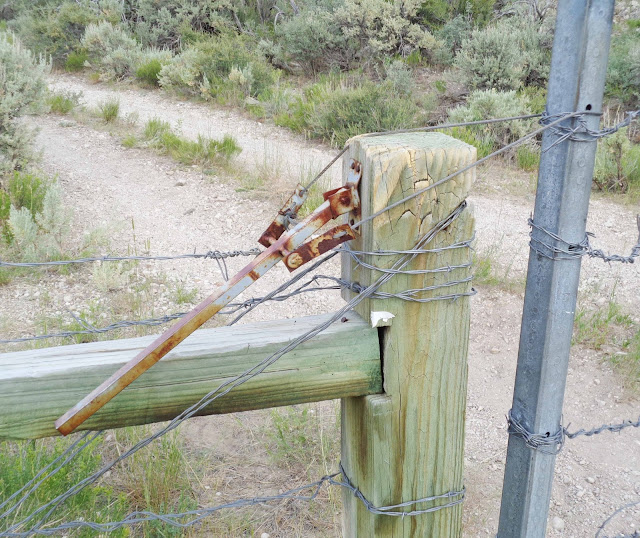 I took the DelaPlain road a few miles south of Jackpot then turned right at Crocket Spring.

After a few more miles I made camp in this saddle. 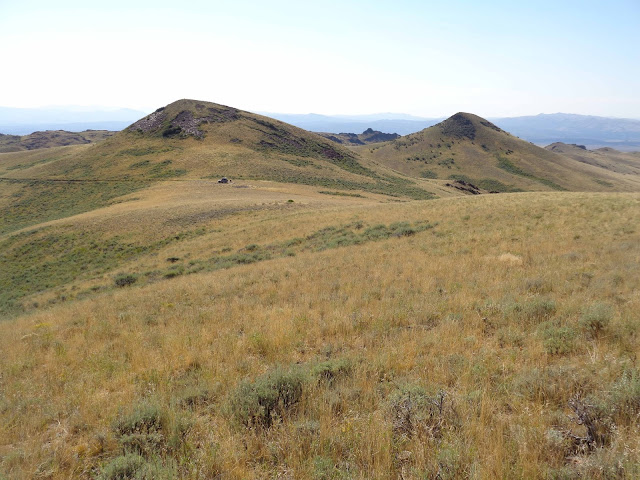 I was fixing supper when a Peruvian sheepherder rode up. He spoke Spanish and my intermittent studies paid off; he accepted my invitation to beer...and then dinner (corazon). He and another live in two trailers parked about a mile apart. One of 'em is that white rectangle in the "flat" area. 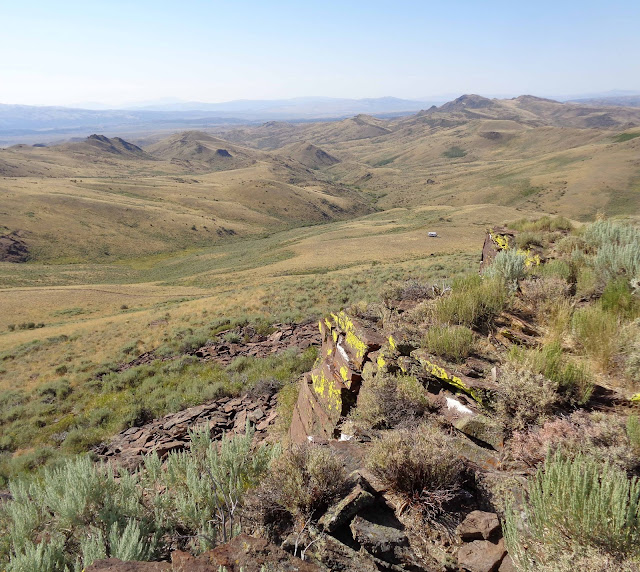 He said their contract was for three years. I showed him my copy of Overland Journal. That's the Trout Creek drainage to the left of my right shoulder. 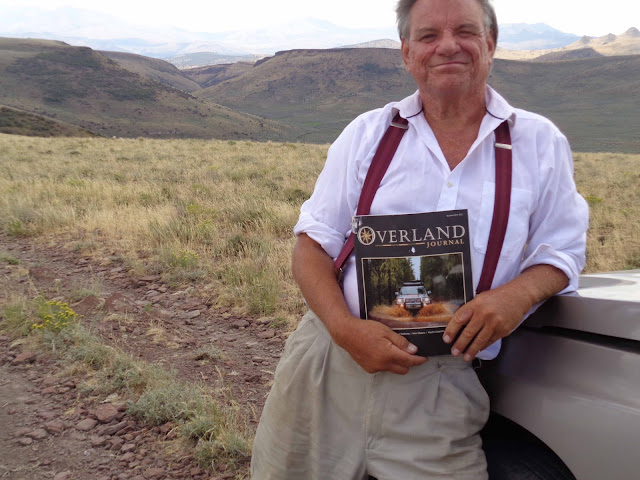 It looked like there might be a road into it, but I decided to follow the Devils Creek road; it resonated more. It was definitely The Road Less Traveled." (I'd be lost without my Garmin Etrex.) 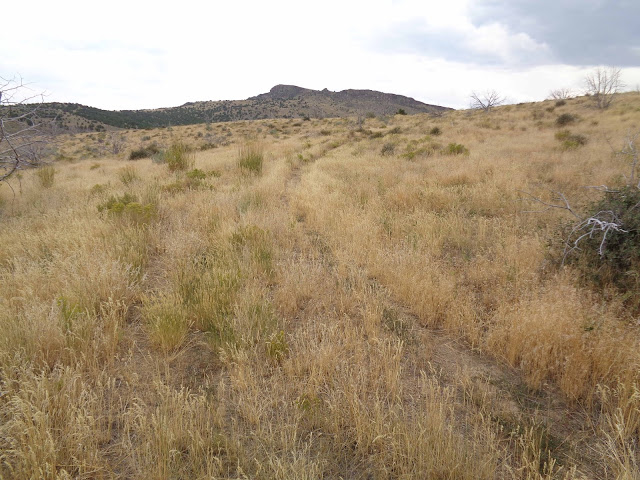 It's beautiful country. And I had it pretty much to myself. 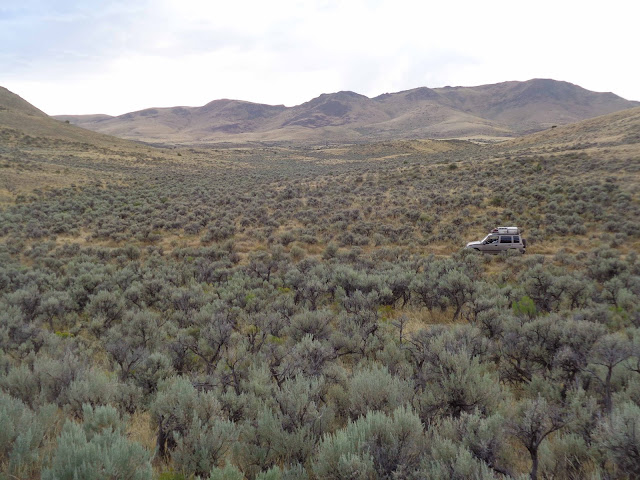 I made more than one trip to Twin Falls and each time it caught my eye. (The last one was to get a diagnosis of the cause of pain where my right kidney hangs out.)

They offered a ribeye, my fav. I've given up on store-bought beef as tasteless, but suspect the rumor about restaurants getting better quality is true so thought I'd give it a try. I like it seared on the outside and raw inside or, as it's known, black & bleu. Melissa took our order and we waited. They'd let their liquor license go for lack of business. This is a "family" restaurant -- with a loyal clientele.

The steak was astounding! It rivaled one I had at the steak house in Los Alamos in 2004 when Frayda and I went up to visit a friend. Jeff came out to accept my compliments and although I couldn't compensate Melissa as much as I'd've liked (I'm on a Low Budget (Kinks, 1979)), I did my best to let her know. (The shrimp dinner she ordered was good too.)

She's got a thing about "NO SUGAR!!" which I've appreciated in my effort to drop the extra 80 pds I've accumulated. But those pies -- in the case by the register -- had the look of authenticity. And although we all know how far looks go, I know I'd enjoy seeing just how far. Perhaps you'll let me know?

I was on my way north to attend the kite festival at Long Beach, Washington when I decided to stop in at Jedediah Smith Redwoods State Park. I took the road through the parking lot, followed it out the back and down to the Smith River. There I chanced upon a 4wd road to a rocky bar. It was rough going and far enough from the road it felt safe to camp.

Not long after dark, while talking to Double El, I head what sounded like a kitten mew. Figuring it must be a bird, I kept on with the conversation. But after the third time I investigated and saw the eyes, reflected in the light from my headlamp, of a kitten. 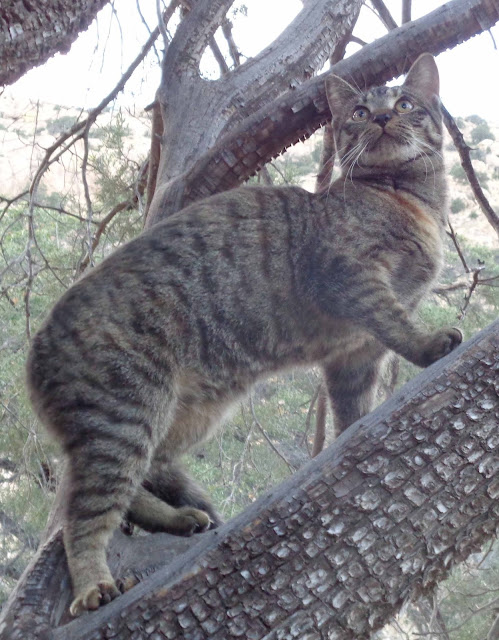 I eventually coaxed her to me and fed her some crab meat which she gobbled down as if she hadn't eaten in days. She stayed with me that night and over the next few days I realized I'd been adopted.

Having found me on the Smith River, I named her Smith.

On my sleeping bag. 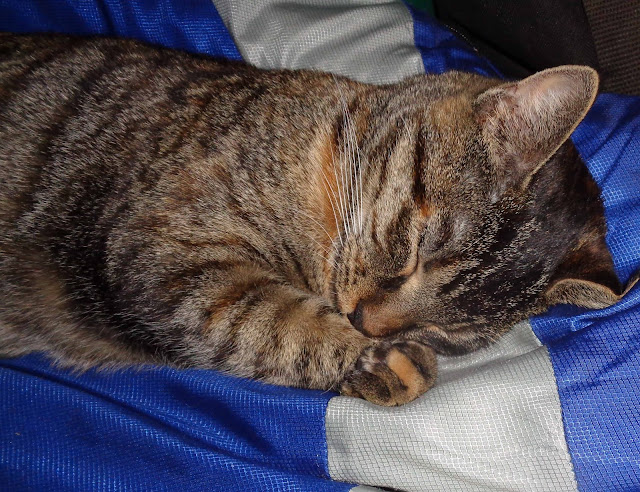 She traveled with me for about nine months until one day, outside Cedar City, Utah, she'd had enough and vanished in the night. (link is to blogpost with details)

As much as I miss her, I know she's bound to be happier where she is. She liked it cold and I like it hot. But we had some good times together.

We agreed to meet at Mineral. She uses maps; I use a Garmin GPS. I was born with a phone in my hand; she avoids phones like the plague.

So it was a pleasant surprise to see her incoming call at 10:00 a.m. Wondering where I was, I said I was at Mineral. She said I couldn't be because she was at Mineral.

An early riser, she moved the mile north to Mineral "North." There's absolutely nothing at either location, except, of course, the beautiful landscape. But no hint of a town.

But after a three-and-a-half-year hiatus in our relationship, it was wonderful to finally be together again. 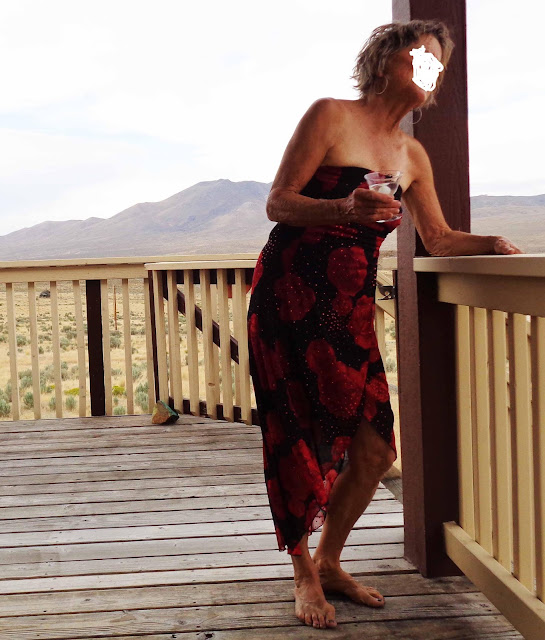 We'd been camped for several days not far from Union Reservoir in the Sierras when I got a call around 7:00 a.m. "There's a bear!" she said.

It left a viscous layer (with its tongue) on a pot lid that really should be analyzed. It was slimier than Everglide and harder to get off and, I surmise, could easily dominate the personal lubricant market. 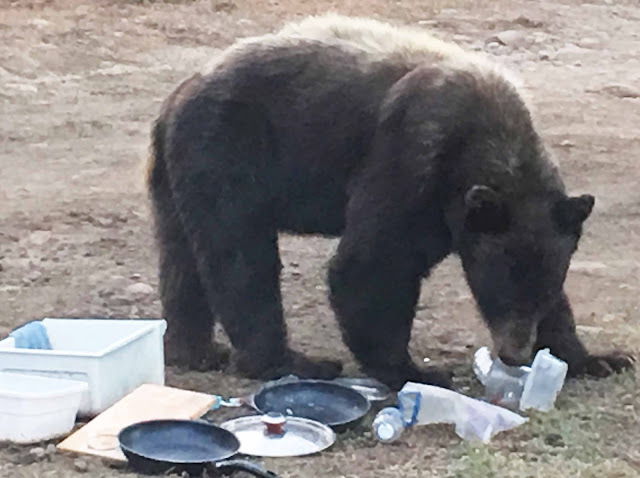 After homing in on my bag of tarps, it picked them up and gamboled off as if it'd found a pot of honey!! 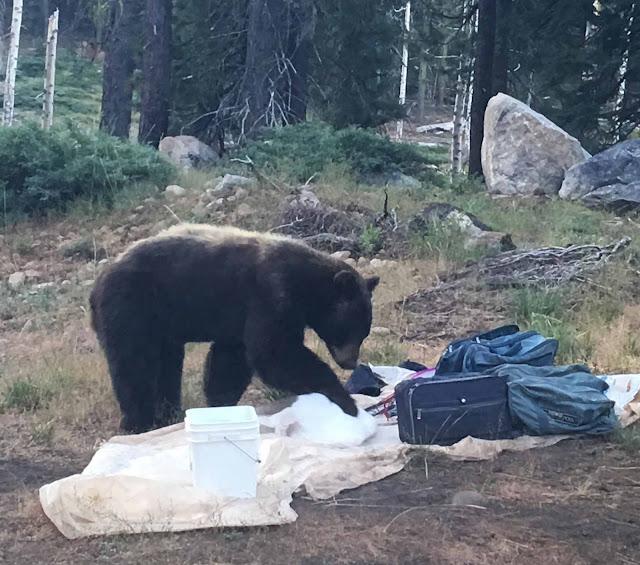 It was all the incentive we needed to move.
Posted by MFH at 10:45 PM 2 comments:

Feeling especially frisky one day, I was practicing my bo moves on an old stump when the stick, a prized possession, lost. A chance inquiry in the Animal Humane Thrift store led to Kenn Louie. 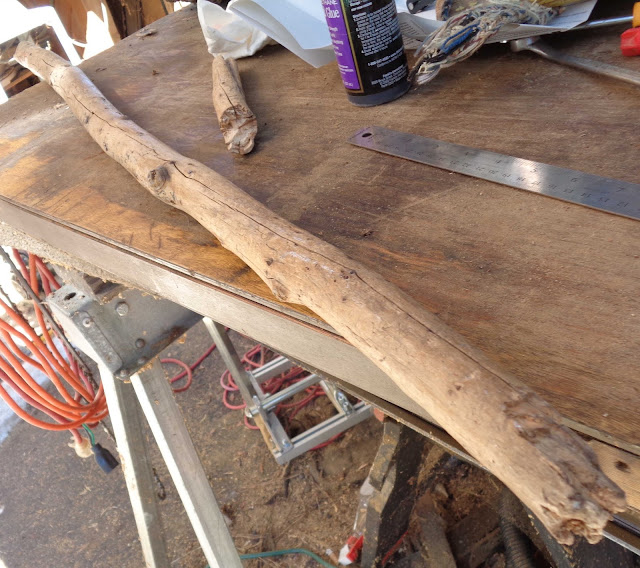 In an early life he'd trained as a diesel/marine/automotive mechanic but made more money falling trees in Alaska. 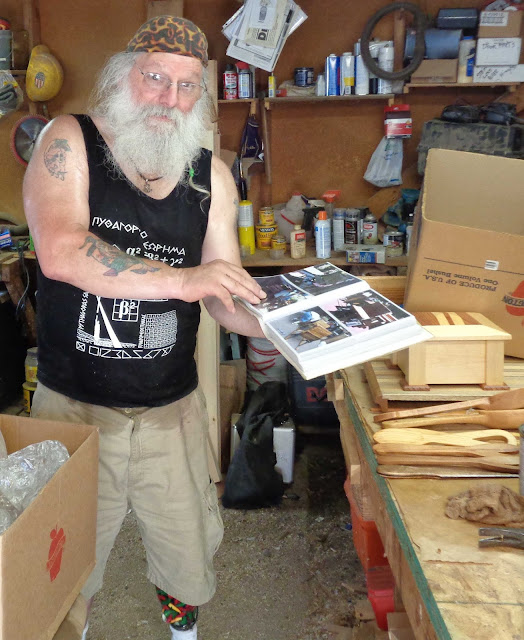 Somewhere along the way he married and moved to Arnold where he fixes anything people bring him. A master woodworker, he inserted a metal rod, splinted the connection with birch strips then bound those with leather thong. 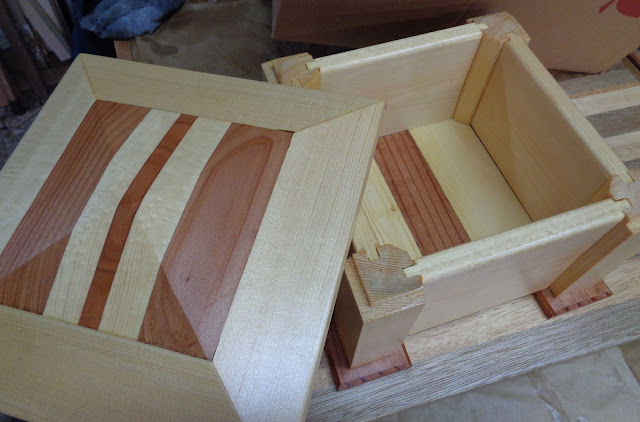 We won't lose the next round with that olde stump! 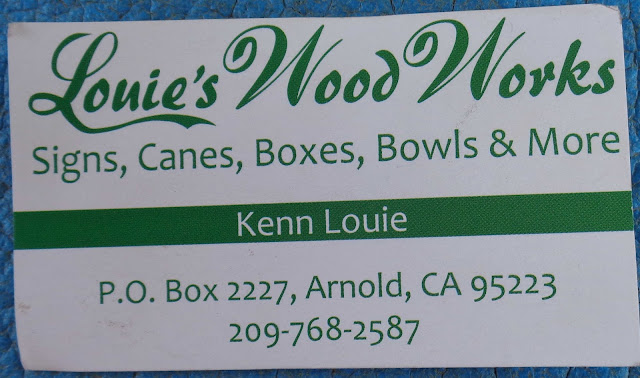