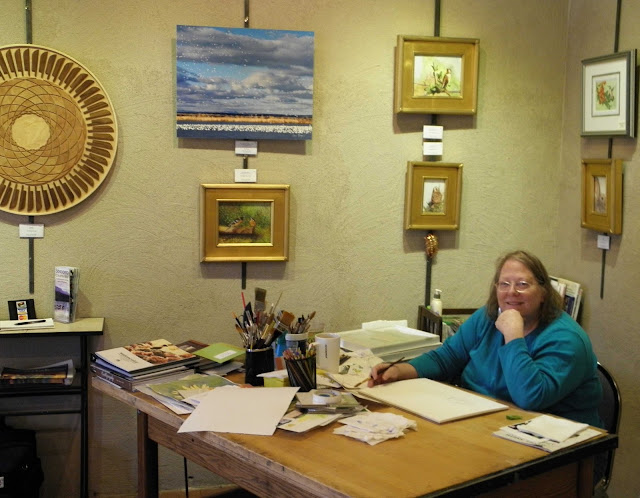 It's hard to find an art fix in the wilds of New Mexico....especially for a post-moderne enthusiast. But I always stop in at 113 Abeyta Avenue, Socorro. 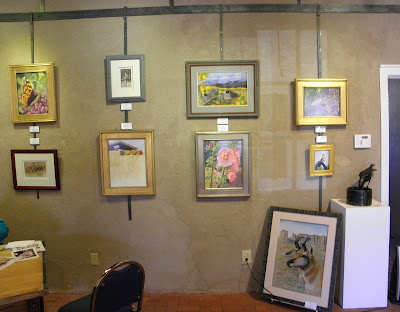 Recently reincarnated, vertu Fine Art Gallery is now owned and operated by Mrs. Georgette Evans Grey, herself an artist. She had two weeks notice before being abandoned by the former co-op's members, but she did it! She's opened up the former studio spaces so there's lots to see.

Please tell her I said hello. 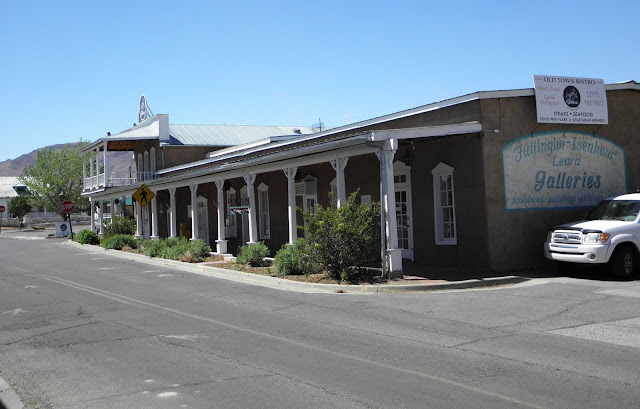 Spring on The Quebradas Backcountry Byway 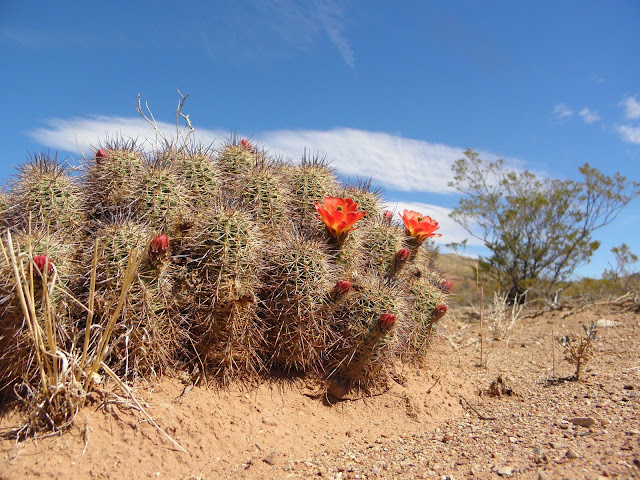 The Quebradas is 80 miles south of Albuquerque -- to the East of the town of Socorro. Spring is happening...the creosote are starting to leaf out and the cactus are blooming.

This is perhaps the farthest north I've seen ocotillo. You can find them in The City (Albert's Turkey), but they look out of place. I suspect they're immigrants. That's them in the middle-left of the photo below. 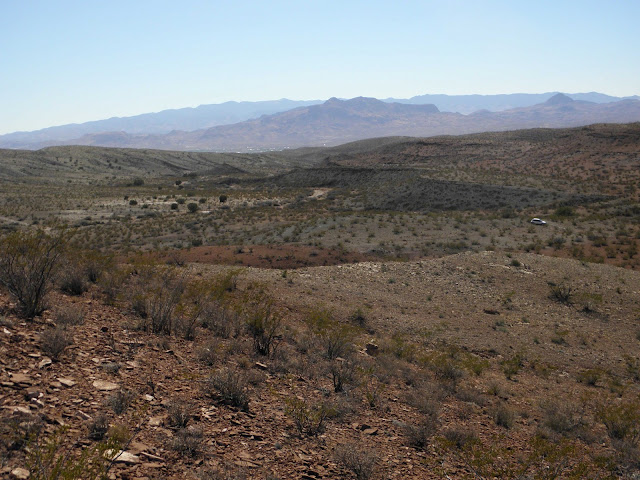 Here on the Quebradas they (ocotillo) seem a bit shy, as if they're pleased with having made it this far, but unsure of their welcome. I, for one, am delighted to see them, but hey, it's troo, I'm into diversity. Their spindly demeanor's give no hint of their (yet-to-come) splendid efflorescence. 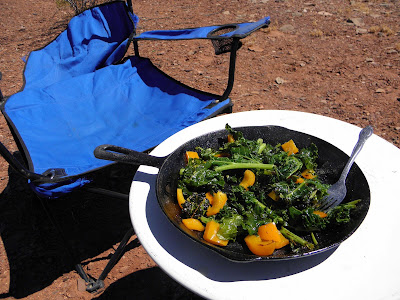 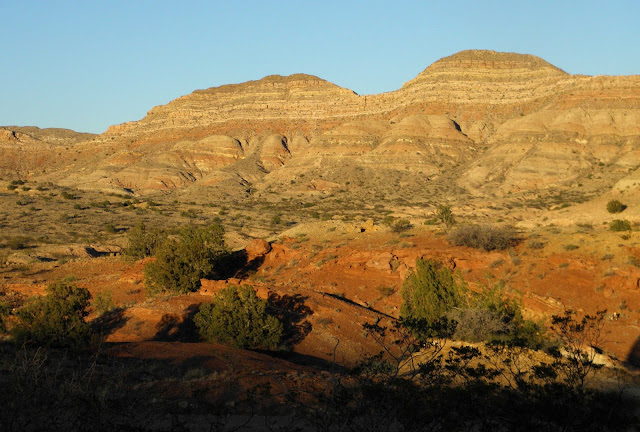 
Mojave National Preserve was created in 1994. Prior to that it was under BLM's purview. Cattle still run, skip and trot, hunting is allowed. There DOES seem to be less target-practice than in other places. And the  fly-over traffic noise is less than around Barstow. It's a nice place. The first three photos were taken near the Hole-In-The-Wall Information Center. The Joshua Tree was along the road to Goffs. 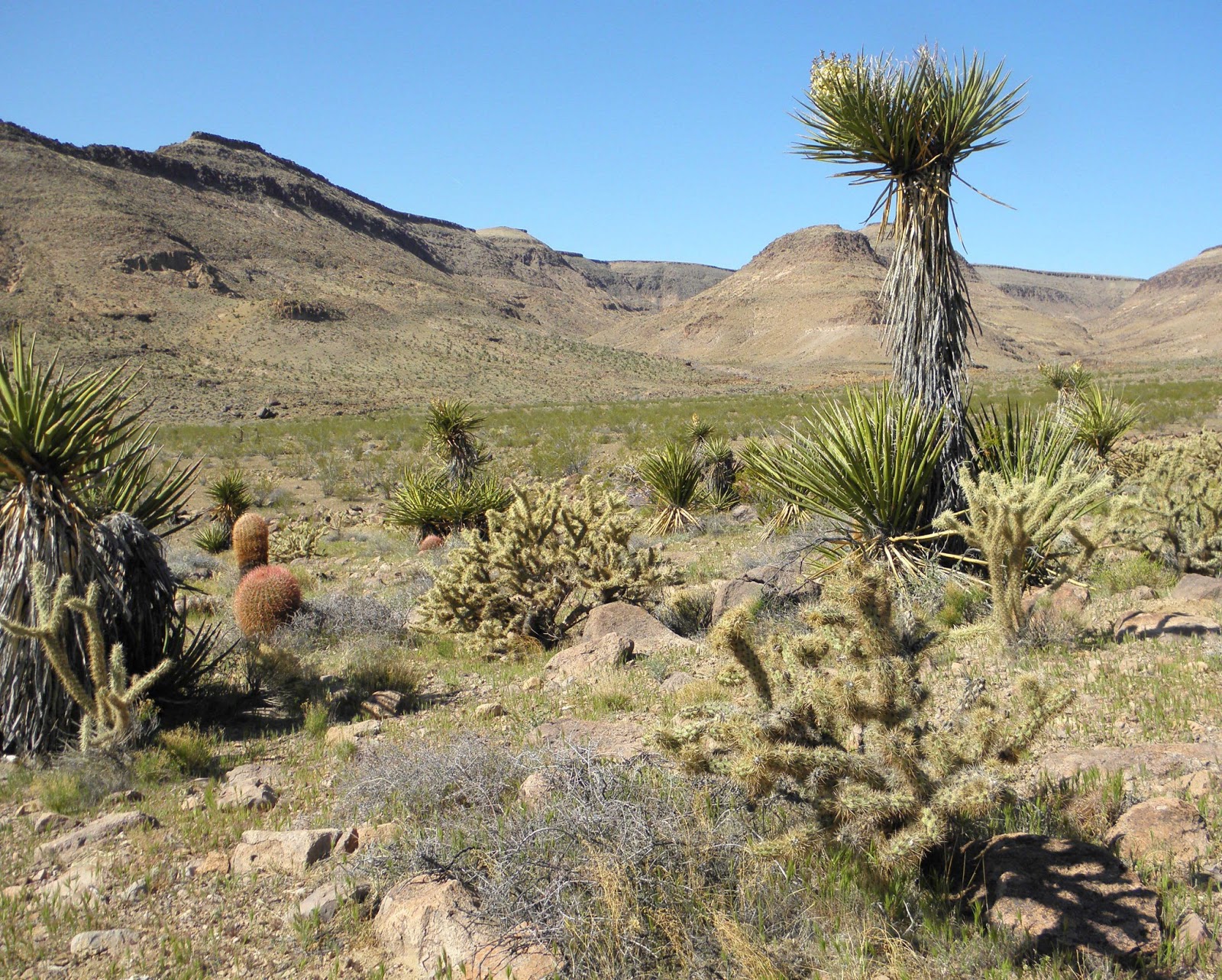 There are a surprising number of opportunities for dispersed (free) camping. 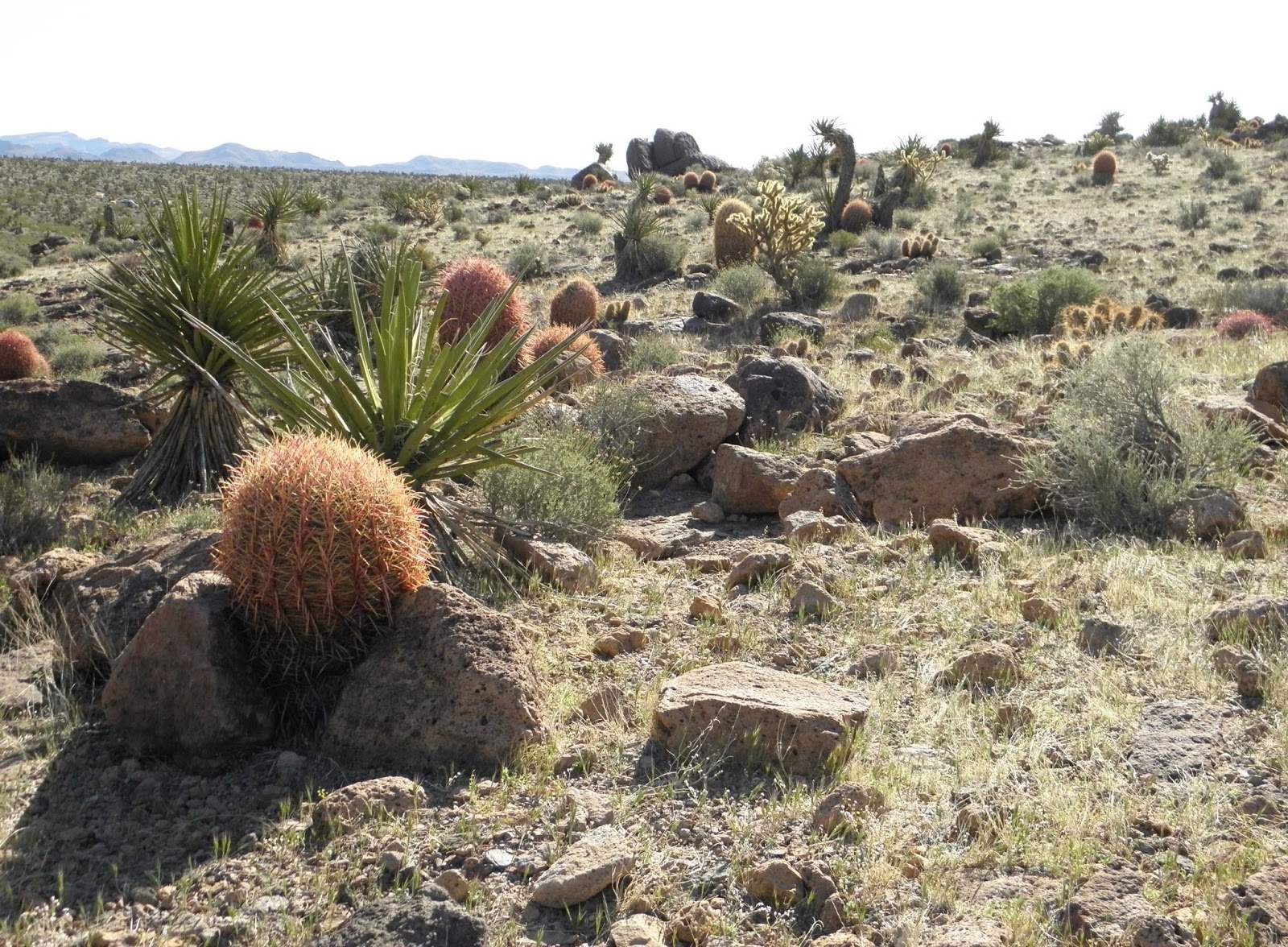 And of those I visited, all were relatively untrammeled...another indication the place offers some real solitude. 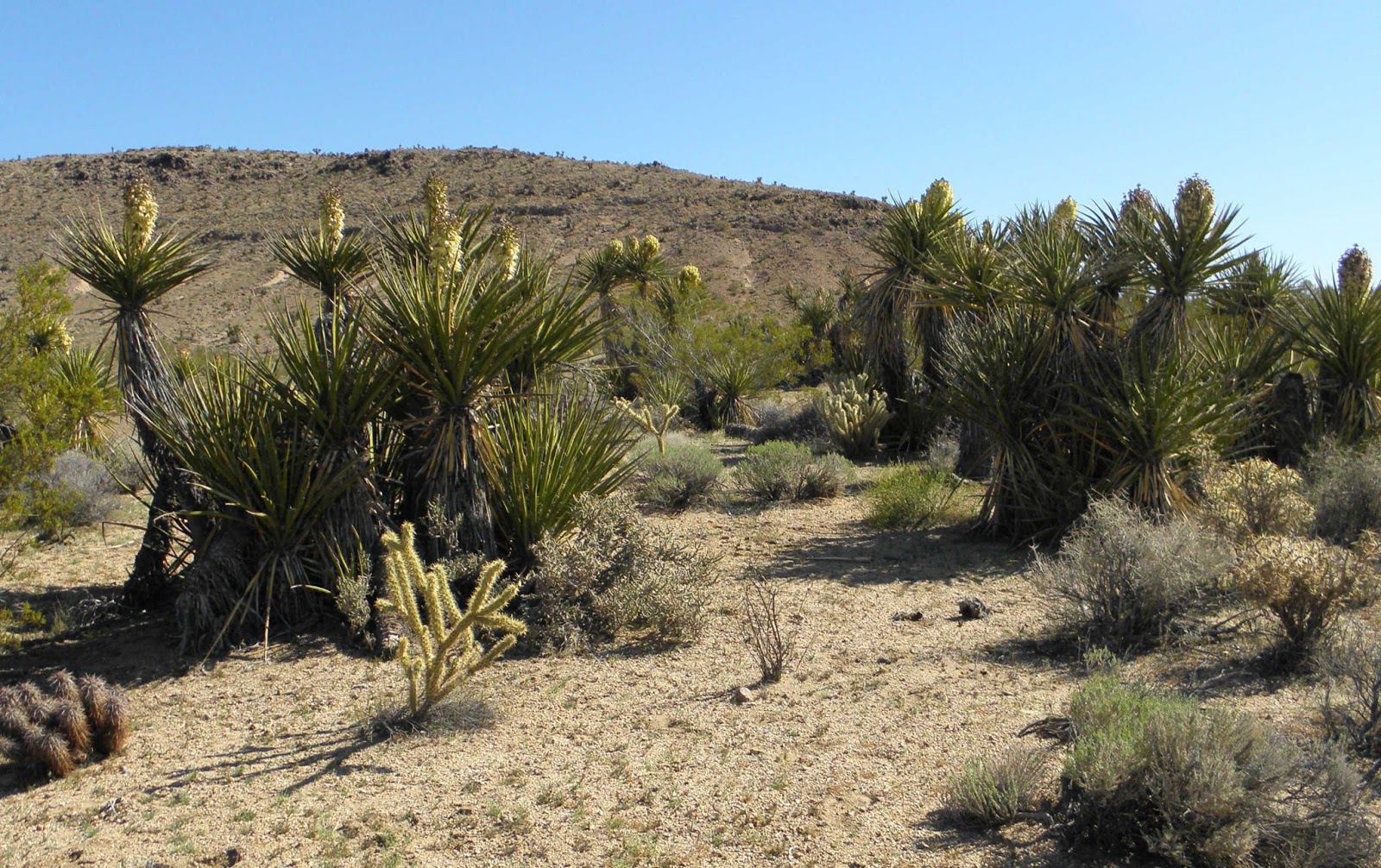 I had the EXTRAORDINARILY good fortune to visit the Preserve Headquarters in Barstow the day Dora was on duty. Dora leads tours, works with many of the other professionals who manage the preserve, and has an immense amount of knowledge. She kindly spent the better part of an hour, even BEYOND closing-time, telling me of places to see...and sandy roads to avoid.

Mitchell Caverns State Park, inside the Mojave National Preserve, was the only California park that was closed after 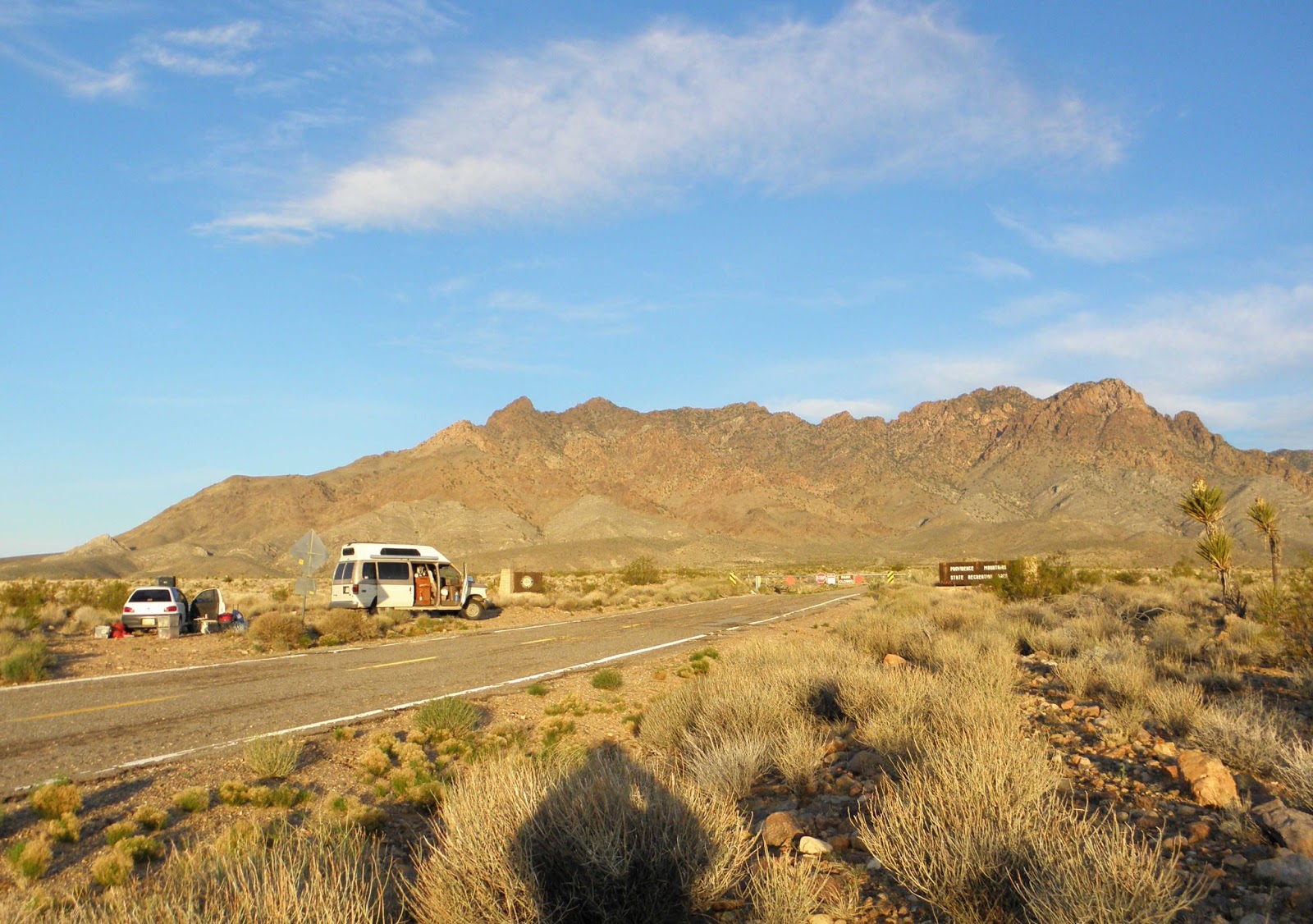 
The California State Parks system has a reputation to maintain -- as one of the state's most inefficient bureaucracies.

So when the park closed, officials simply locked the gate. The cost of re-opening --sometime this summer -- is estimated at over $450,000.00. They didn't drain the water lines and, of course, the pipes burst. In addition, vandals and animals caused further damage.

Grazing is allowed in the Preserve which borders the State Park. There's a fence surrounding the Park - with a broken gate that allows easy entry to cattle - but it's obvious that the land on the Park side is in better condition, plant-wise, than the grazed side. It makes me angry that even now, decades after the initial devastation by cattle, the depredation continues. And if you Google depredation (this link is about the payouts -- yours & my tax monies) what you get is all about wildlife....nothing about the damage perpetrated by cattle, sheep and their human exploiters.

Barstow, California - It Takes Some Doing


The sign in The Olde Train Depot hints at the town's difficulties. 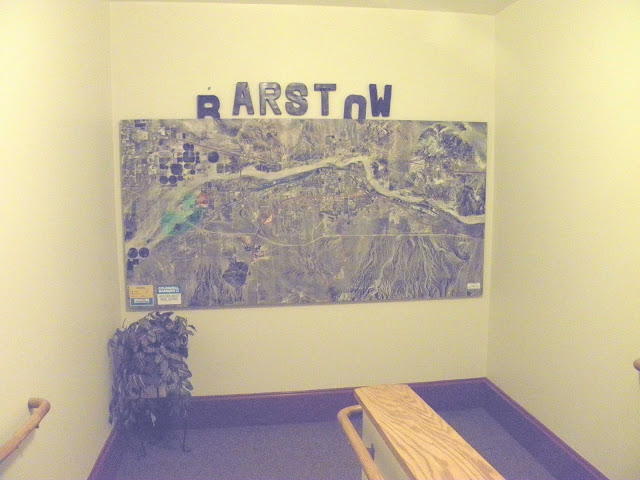 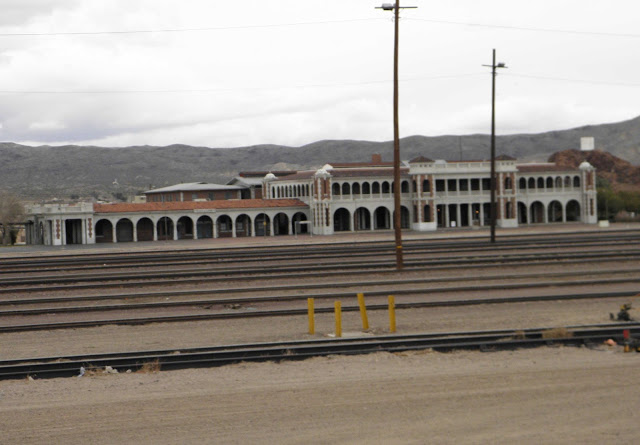 They managed to rejuvenate the Train Station using earthquake monies from the 1990s. One of Fred Harvey's ventures, it's hidden on the opposite side of the tracks and takes some doing to find. 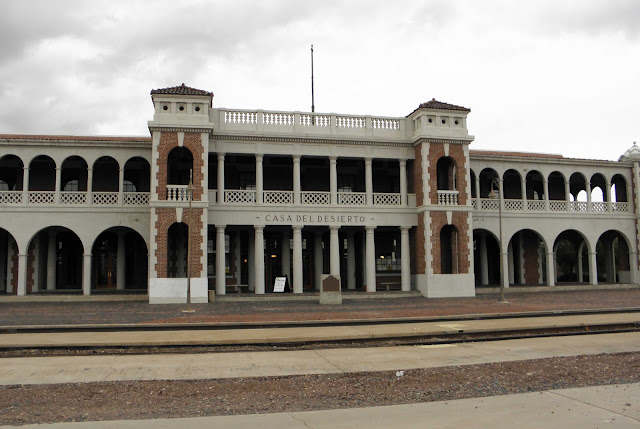 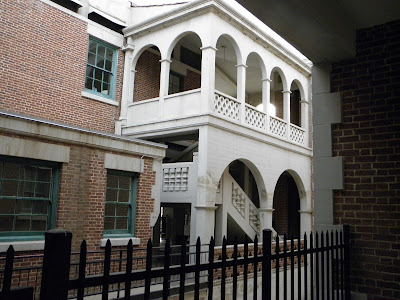 After enjoying the architecture, you'll want to turn right upon exiting the complex in order to experience one of the worst bits of road in the continental U.S. Also take note of the splendid (NOT!) view of the Mojave River as you cross over.

When you come to the four-way stop you'll almost be on old highway 58. Continue past the forest-green Mexican restaurant with the magnificent stevedore sculpture (Luis Jimenez woulda been green with envy) and go about two miles (this IS hwy 58) to the corner of Soap Mine Road.

Here you'll find a collection of vehicle/sculptures, some of which were used in the movie: Mad Max Beyond Thunderdome. 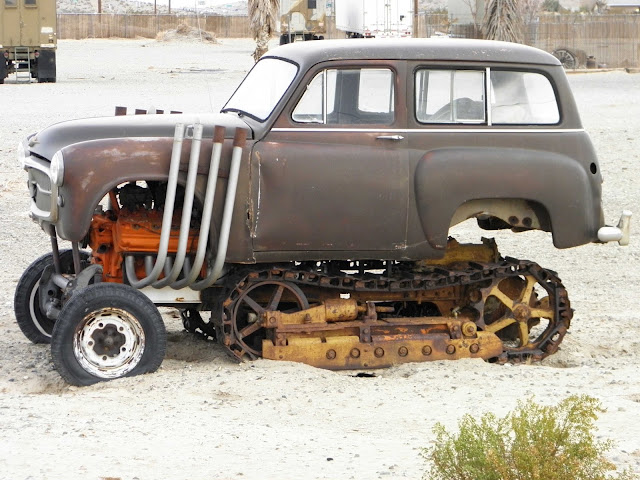 The sculptures were crafted by two brothers, now deceased. 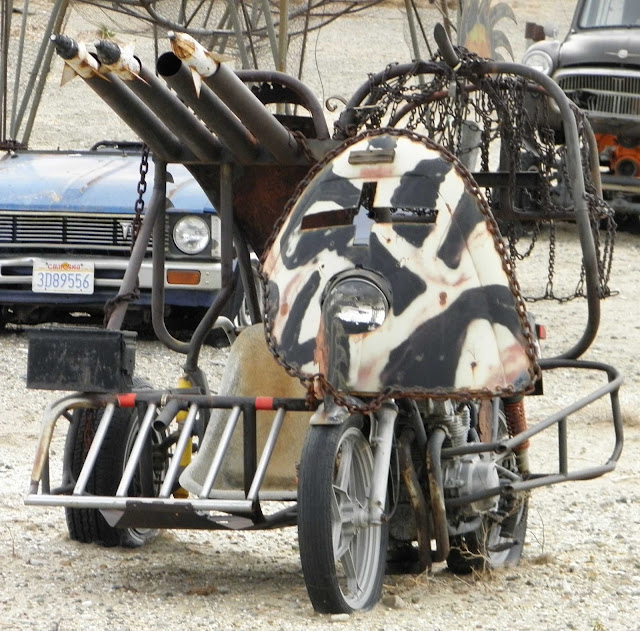 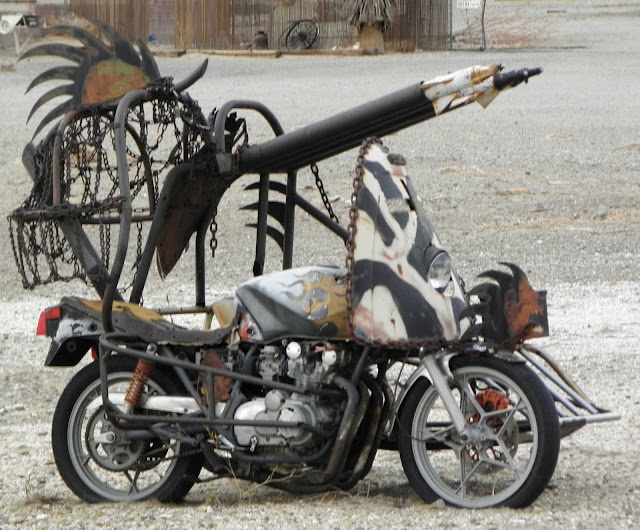 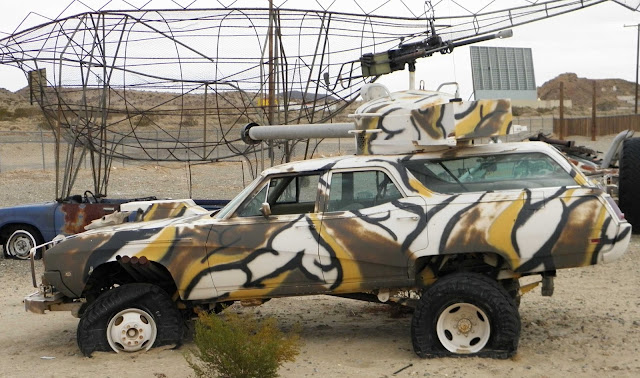 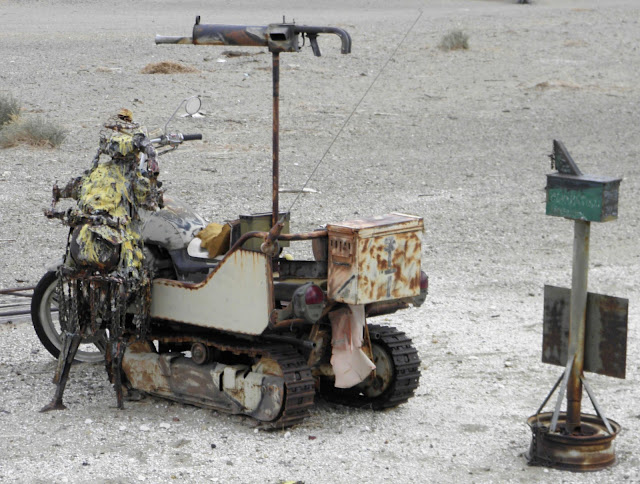 Back in town, 3B Tenis Shoes offers some great deals. Proprietor Pedro Valencia, who, contrary to his expression in the photo below, is quite friendly, made me a deal on a new cap...only $5.00. He and son Abe were presiding that day. One block West of Barstow Rd on the South side of Business I-15 -- also known as National Trails Hwy. And in case you noticed, the Spanish spelling of tennis is with one "en." 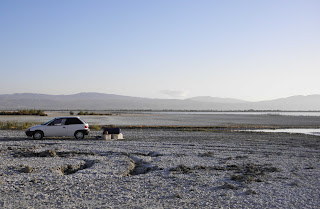 It was late afternoon as I headed east on highway 78 toward the Salton Sea. I was envisioning an idyllic beach-side camp with the crying of gulls and a mermaid or two.

At the junction with 86 the wind was blowing so hard I had tuh use my 'mergincy brake tuh stop. It was crosswise as I turned north and whilst I drove thar wuz airborne rat'lerz, a herd of javalinas four feet off the ground, and a brick porta-potty whut comed acrosst the highway. Thar warn't no way tuh camp! 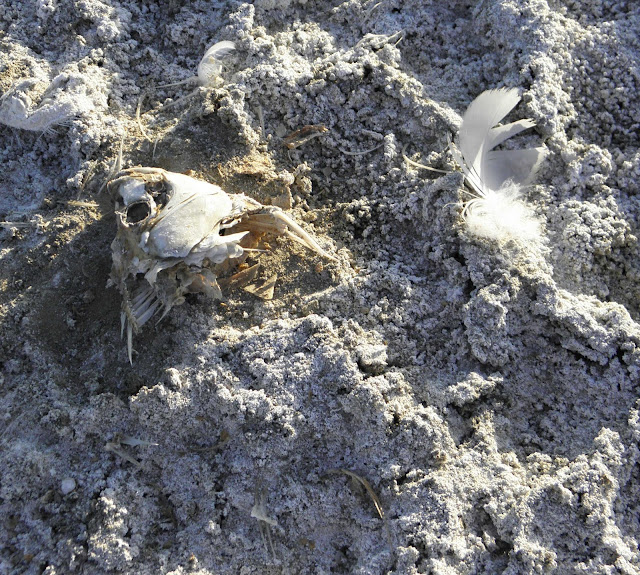 Some miles up the road we rounded the mountain and the wind abated. I tried several tracks looking for a camp but all led to private property. 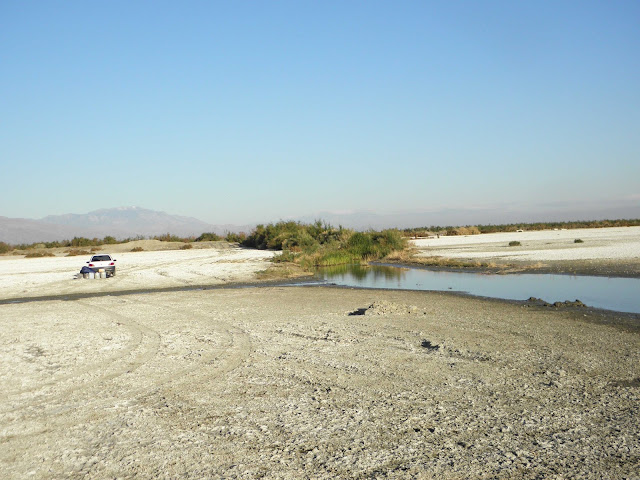 It was almost dark when, with  failing hope I turned onto what I tho't of as my last-ditch chance. It took me throo bordering stands of tamarisk too high to see over until I emerged on a "pristine" beach complete with pelicans, seagulls and my own "freshwater" slough.  Once again I thanked my lucky stars for bringing me home.
Posted by MFH at 4:43 PM No comments: