You Never Know What You Don't Know....Until You Find Out


I like to cruise towns to see what there is to see. Springville, Utah had proven to be more than I could imagine, but I'd had my fill and was ready to amble on.

Enroute to the highway (sort of) I came around a turn and saw a huge building. The sign caught my eye and by the time I passed the gate I was down to walking speed. That's another nice thing about being off the main roads...not as much potential for rear-endings.

I made a u-ee, did a quick "visual" as I drove through the gate and pulled up in front of what I hoped was the office. Inside, I asked the man at the desk if they gave tours. He smiled, but the look in his eyes gave me the feeling he wasn't sure whether to humor me or throw me out. I launched into my schpeel: The building was obviously a major place in its day and I could see from the road that the pallet business was a going concern. I explained that my insatiable curtiosity (ala Rudyard Kipling's elephant) about things I know nothing about compels me...I just can't help it. I went on about how I'm traveling and this looked like it'd make a good blog article. He stood up and said, "Okay." We sallied forth.

I introduced myself to Mr. Dave Nielson who acknowledged ownership and said he'd bought the business twelve years ago. In that time he'd trebled the amount of pallets they sold. We entered a large metal building where they recycle old pallets, cut up wood for new ones and assemble large bundles for delivery to clients. 90% of their business is new pallets. The other 10% is in competition with people who specialize in reselling used. We soon touched on the subject of undocumented workers. Mr. Nielson requires a Social Security Card and/or a green card. Every now and then one slips through, but he said they eventually get caught and are terminated. "The cheaters know it's just a matter of time," he said, "so there's no resentment. It's just a fact of life." 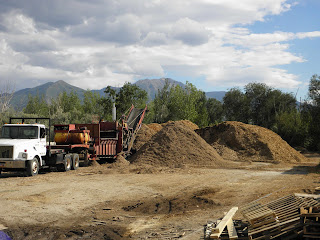 Unusable pallets go through several steps on their way to becoming mulch. All nails are removed by hand. The wood is then processed by a grinder three times to prepare it for the REAL grinder. After the REAL grinder gets them, the resulting four colors of mulch add aesthetics to minimalist gardens, are great for keeping weeds down, and since they're  organic they add no harmful chemicals to the environment.


Originally a sugar beet factory, around the 1920s it was converted to coke processing to support a nearby steel mill. Coke is made by grinding coal to powder, heating the powder in a controlled-air environment and after a while it comes out as coke. Coke burns hotter than coal and was thus useful in making steel.

The building has deteriorated and it's too expensive to restore so will eventually be torn down. 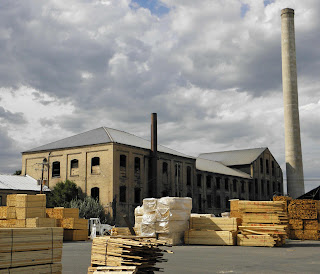 In the meantime, it's sitting there.

It was while checking the grade on a rocky slope in the Nevada desert I noticed the Metro (3 cyl, 1,000cc, 50+ miles/gal) needed new tires. The Michelin "X Radial"s I'd bought two years ago were warranted (yeah, right) for 80,000 miles. Now at 35,000, less than half their lifespan, they were shot. I googled Costco and began cogitating on the worth of my pro-rated refund.

I settled on a store in an outlying suburb of Salt Lake City. It was rush hour (of course) when I began my approach. I made several passes, each involving getting on & off the freeway, multiple u-turns (when sequential they become pirouettes) and other gyrations. Forty minutes later.....not bad for rush hour.

I couldn't help but overhear as The Tire Manager schpeeled the customer in front of me. The pros and cons of tires weren't as fascinating as the olde days, but his prosody was amusing. Generally found in car salesmen, door-to-door proselytizers and multi-level marketers (multi-level doesn't qualify for the teer suffix...as in marketeer), it had that "just get 'em tuh get out their wallet" cadence.

My turn. Things quickly deteriorated. I had THE FINAL INVOICE but not a receipt...and there wasn't one in the computer. AND the computer contained no evidence of my having purchased an INSTALLATION PACKAGE (road-hazard & caveats coverage). This was where things got rough. I remembered buying the package, I always do, but without it the tire's warranty isn't worth the noise of voicing it. He Laughed Out Loud when I asked about the manufacturer's warranty. We then went out, took the measure of the tread, and determined that the tires were, in fact, worn out.

Back inside, Steve printed out all the information in my file and signed off on my handwritten notes. It was getting late and he offered to escort me through the work area rather than chance the possibility of overexertion from walking round the building. I accepted.

As we approached the exit door he asked what had brought me to the area. I explained I'd been the primary caregiver for two women undergoing treatment for cancer during the last few years and was taking a breather before entering the next phase, a stem-cell transplant pre-op meeting at the Mayo Clinic. This is a difficult subject for me and I spoke while looking at the floor. The pause that followed my last sentence was longer than usual and when I looked up I saw that he was crying. I asked what was wrong.

He said he'd found out this week his mother has an aggressive form of breast cancer and was going to die. He and his wife were planning to visit, but the doctors had refused to speculate on how much time she had and he was in a turmoil over when to schedule the time off.

It is moments like this that even I find difficult. A friend who's had far more experience once counseled me to simply say, "I'm sorry." And so I did. He thanked me and there followed another pause. I thought he might reach for the door, but instead he talked a bit about her condition, how young she is, the life she's lead and that with all that and 24 grandchildren it didn't seem fair. Again at a loss for words, after a  moment I once more expressed my sympathy and extended my hand, which he accepted.

As I walked out into the deepening dusk of the parking lot I looked up at the stars which were just beginning. I stood there softly crying and pondered on how difficult it sometimes gets. Somehow, most of us find the wherewithal to make it through. Later I remembered what my wife (the one time I legally married) who was an ICU nurse (the Intensive Care Unit is where alot of the dying occurs) said, "It's sad how many people don't take the time to say I love you. It's often too late when they get to the end....and then they realize they've missed their chance." If I'd been thinking a bit faster I might have said something to Steve about the significance of those three words; but I felt sure he knew.

Intuition said head for the pass. I could just make it out against the darkeling sky. As I drove through the streets of Springville a sign for the Art Museum blinked. I made a mental note to check it out the next day.

Suddenly, I noticed a multitood of cars parked along the curb and a large, brightly-lit building loomed in the dark -- people were coming and going. It was the museum and there was a reception in process. Art has always provided solace and I made for the entrance like a boar that's sighted a sow. (Male pig's are famous for their multiple orgasms; little to nothing is known of female pigs' orgasms. One can guess which gender did the counting.)

The reception was for an exhibit of paintings and prints by German-American artist, Herr Wulf Barsch. Born in 1943, Herr Barsch studied painting in Germany before immigrating to the U.S. After receiving his Master's degree from Brigham Young University he taught there. Over the years he also produced a number of lithographs at The Tamarind Institute in Albuquerque.

But it was Andrew Smith's sculpture, Moon Pool that made the day.


After the party the road led into the "Exclusive Neighborhood." (Nothing like a big home to assuage mortality.) At the end I took a right, went about a mile and came to Canyon Road.
The name sounded right and I could make out some high ridges against the dark sky. Ten (mostly dirt) miles later I was ensconced on a mountain top surrounded by those (aforementioned) stars. Now, I could tell, giving it their all.

And though not fully recovered from the jolt of Steve's mother's illness, they inspired a wave of gratitude for the sixth sense that enables me to find my way home each night...into the wilds where they await with their undying lights.
Posted by MFH at 12:45 PM No comments:


Thousands of firefighters are battling the devastating conflagrations in the Sawtooth National Forest. Flames light the skies at night while the smoke makes driving all but impossible.

Flagmen warn of low visibility and signs are posted at every turnout listing the dangers of smoke inhalation (cough, cough).

From Challis to Stanley, herds of deer shepherd their bambis across the highway as the elk, bear and others flee in terror. I watched with terrible sadness as a hephalump (with singed fur and a surly look in its eye) trudged its way to safety.

The sun shines dimly through the haze and there's a Satanic vibe in the air. It's as if the Apocalypse has come. And who knows, perhaps it has!!!

It's great! I have the place to myself!