In the '90s, the Gallery Years, it hosted groups that included artists from all the disciplines.

Croquet, cheating encouraged, was part of the entertainment; the lumpy crabgrass lending an additional surreality ala Alice-in-Wonderland.

Evenings, the light of tiki torches threw shadows; all further enhanced with wine, pot and/or mushrooms.

Now, with only the glow of the kitchen light and an iconic Distasio (they're ALL iconic!) painting to remind of those times, we sat together, basking in each other's company.


I hope to leave tomorrow.
Posted by MFH at 1:58 PM No comments:

Enjoying the remembrances....(see prev post), here are a few of the things that inspired the love of his family and friends...

From a letter of condolence:

One of the many qualities I enjoy about your brother was unafraid he was to be open with his feelings.  Peter recalled the time when he visited your mom in the hospital many years ago, I only wished he taken her advice.  He said she told him, "Take care of yourself Peter."  I only wish he heeded her words, we all could have had so many more good laughs together.  This is the one thing I will truly miss about your brother, laughter brought about by trading funny stories with each other till 4 a.m. in the morning .  Mistaking super glue for eye drops?  I still don't think I will ever beat that one.

Your brother was a very smart, caring and fun person to be around, he had a good heart so I never minded trying to help him out.  He truly had a gift of gab and could make friends with a telephone pole if I left him alone outside for 5 minutes.  Mind you, we've had our moments but the vast majority of good times are something I can always reflect back upon with a  wide smile.

Favorite songs...(Interesting, isn't it, what a diff just a couple of years makes in what we like(d)?)

This piece will accompany him as he's lowered into the ground.


East...toward a new day; beyond the sun.

Email ThisBlogThis!Share to TwitterShare to FacebookShare to Pinterest
Labels: Duplessy and Regnard, Eulogy, Peter, Road to the East

The Words We Never Tire of Hearing

I was in Walmartz buying groceries this afternoon when the text came saying her brother had died an hour earlier. He'd been at it for years, but the last few weeks his regular pilgrimages to the E.R. let us know it wasn't gonna be much longer. Still, it brings tears.

Two months ago one of her best friends, they'd been Best Friends since elementary school, went.

That same month another good friend's daughter passed. She was 56. She'd lost another some years earlier when, on her bicycle, a truck turned in front of her. It didn't make this one any easier.

At the high-school reunion six weeks ago the prettiest, smartest, most "successful" told her she had MS; it seemed incomprehensible. No one can say how long she has, but regardless, it's too soon.

Her Dad died a few years ago. At our age it feels like "just the other day." He'd gone to an assisted-living facility, of his own volition, where he met and fell in love at age 85. The woman was an artist -- in the most wonderful way. She'd sing at the dinner table -- Broadway tunes from the '40s mostly --  her soprano still clear and bright at age 86...inspiring the rest of the family, they often visited, to join in. She died in March.

I've written of this before: In my early thirties my wife was studying to be a nurse. As part of her training she rotated through various departments. One evening, during her stint in ICU, she came home and told how people often die in ICU. She described how they realize what's happening, and that it may be in the next few hours. But what has stuck with me was how many, she said, are saddened by having neglected to say, "I love you." And now it was too late.

Email ThisBlogThis!Share to TwitterShare to FacebookShare to Pinterest
Labels: death, I Love You, Jana, Peter

One HAS to surmise that with the surname of Reiche, that Greg has SOME genetic qualification for the grandiose. But who knows?


There are similarities between the 30-foot-tall (9.14 m) and the block-like forms of the National Hispanic Cultural Center in Albuquerque. I find it interesting that conquerors would so quickly adopt architectural styles of a people (Aztec/Inca) they apparently felt were, apart from their gold, useless. 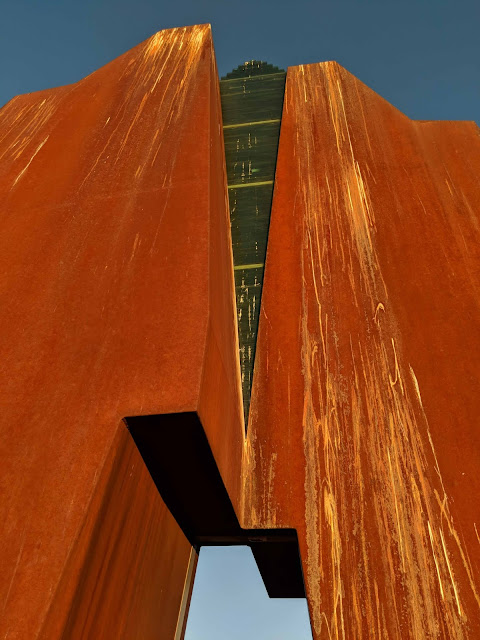 Inscribed on the narrow wall of the crotch is this quote from Ralph Waldo Emerson:

"Though we travel the world over to find the beautiful, we must carry it with us or we find it not."

(Emerson was an inveterate arm-chair traveler so you gotta consider the source.) 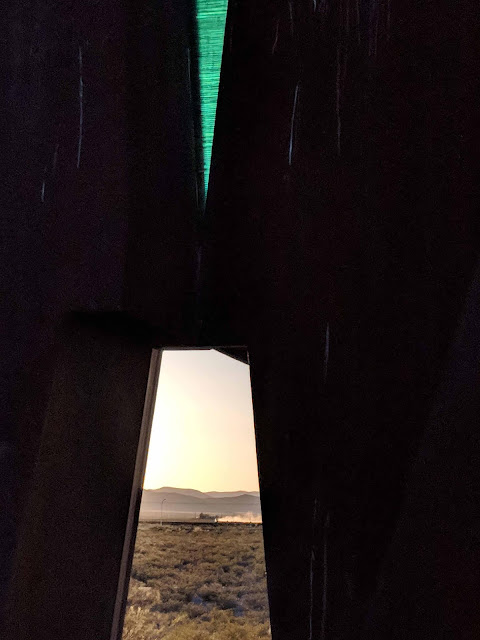 Cook saw it as a pair of unzipped pants.


The sculpture also brought to mind a monograph published during my tenure at UNM Press: Las Carneradas: Sheep Trade in New Mexico 1700 - 1860. It describes how the Spaniards brought, as food for their journey, hundreds of thousands of sheep. The landscape was so severely impacted it's speculated it will evolve rather than recover. Much of the land to the east and south is part  of the Armendaris Ranch, owned by Ted Turner. 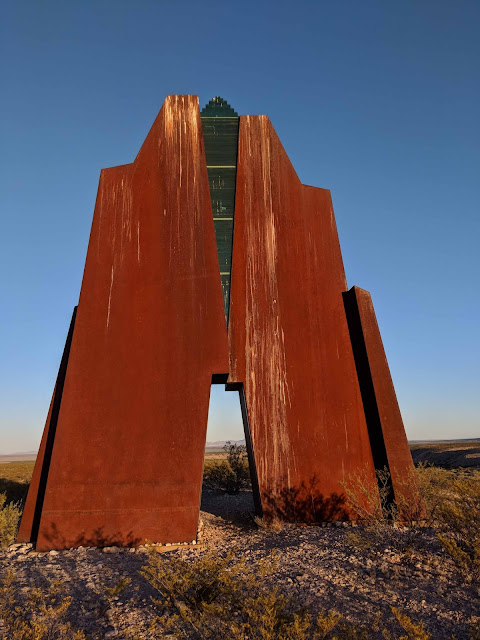 If you've read Sophocles the Hyena by Jim Moran - a tale of Morris the cat on his way to cat-school - you may recall Ralph-Ralph, the dog, who carries in his pocket a bit of green glass. As each new friend joins the group he brings it out to show announcing, "It's the only nice thing I've ever owned." 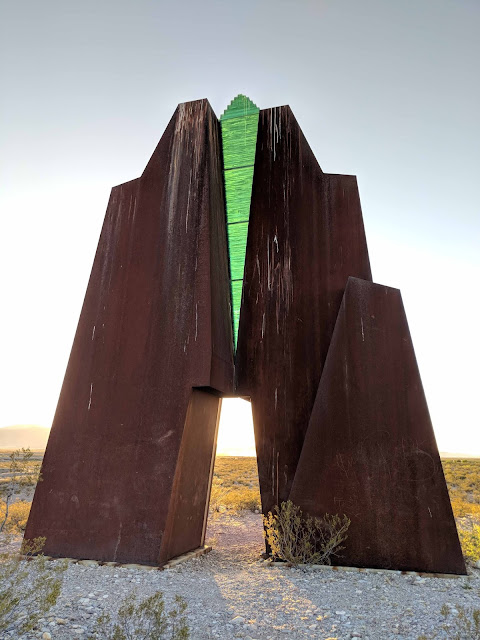 I have yet to make it the five miles down to the Visitor Center (closed until further notice.) But inquiring minds wonder at the influence wielded to obtain funding for such an out-of-the-way project?

More about Turner and the Armendaris. There are also, of course, Youtube vids.

Every time I pull a box off my roof I admire the custom-made rack. There are a couple more (boxes) inside and several pieces of luggage with clothes and other stuff. But I keep a close eye on what's useful and quickly jettison that which ain't. (Gotta hav room 4 the art, dontchya know.)

Thus, while strolling downtown Silver, I indulged a bit of satisfaction when I spotted  THESE folks' rigs. Of course, they're probably a polyamourus family with multitudes of children, animals and other responsibilities. 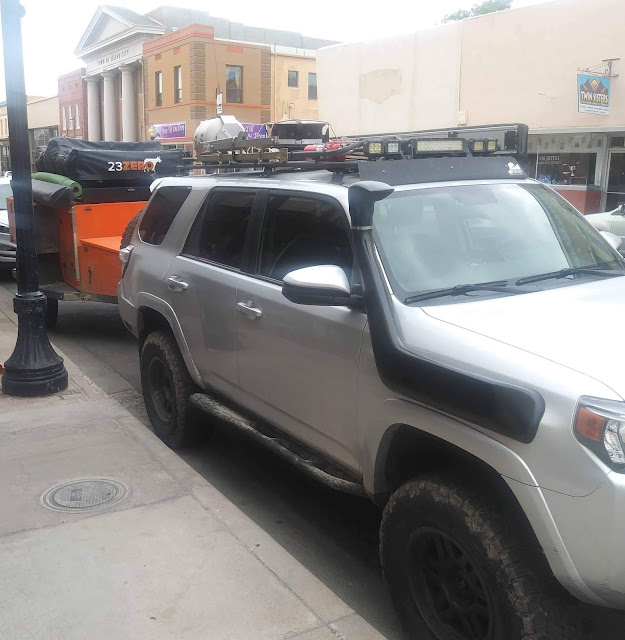 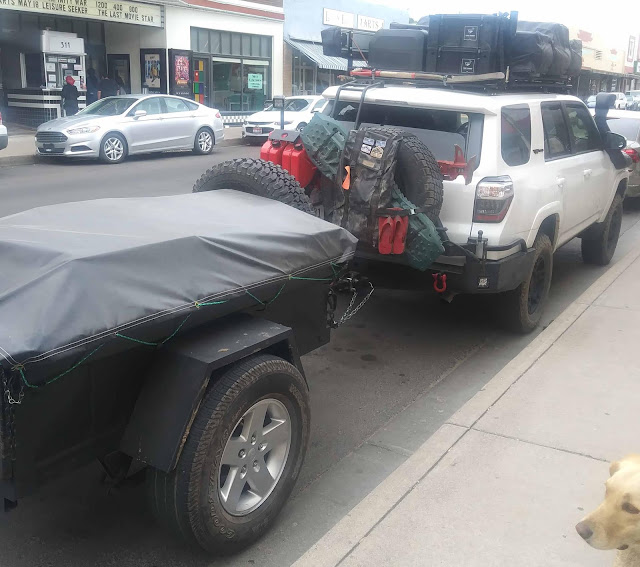 Still, I paused to savor the fact that MINE all fits inside and on top; no need for a tag-along.

(The dog, was, I surmise, speculating on the tires and trajectory.)


About the blog banner.

"Go to A Space," they all said. We found a phone number on the Silver City Art Asocciation's website. He IS on Facebook.

Jean Robert Beffort (pronounced Bay-four), with an accent over the e, French-Canadian via Montana (Here's a short biography) said he'd be there. 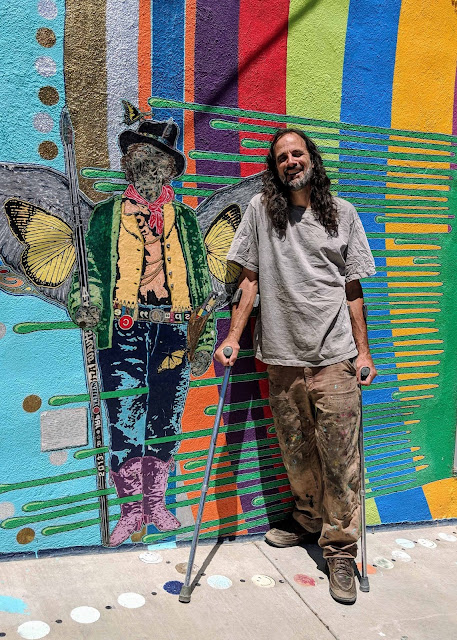 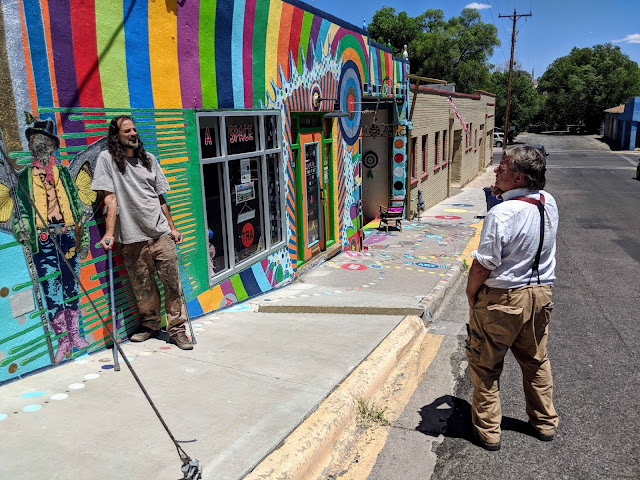 Once a car dealership, it's now a gallery, studio, performance space with an area called Art-On-A-Stick where even YOU can partake impromptu. 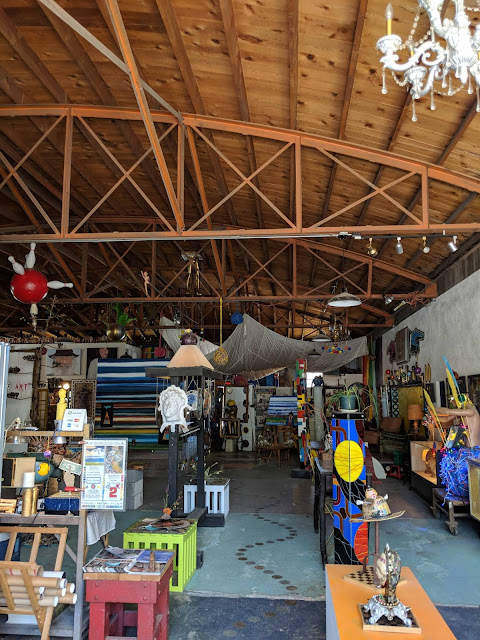 Back When Tee-Vees came enclosed in wood. 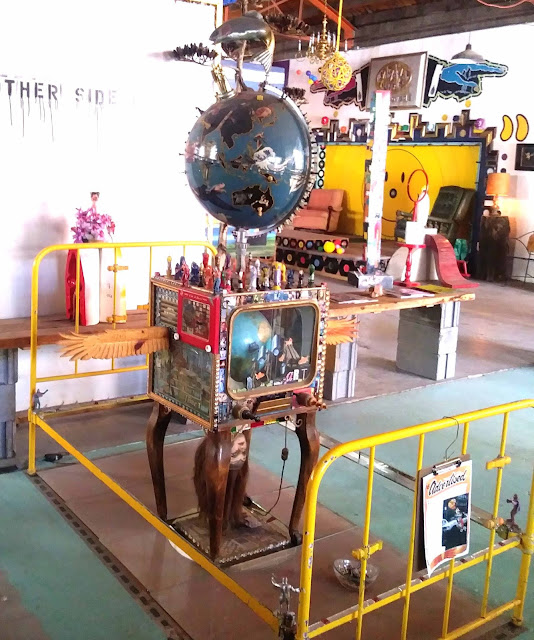 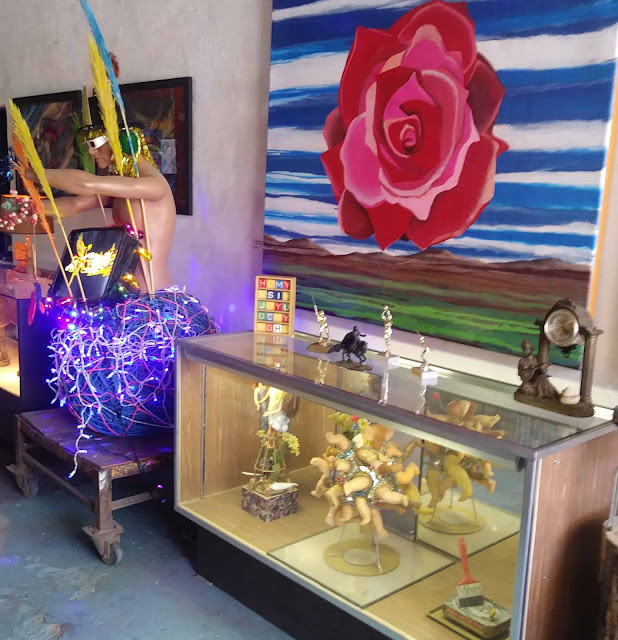 The blue ball is wound ethernet cable. It weighs over 400 pounds. 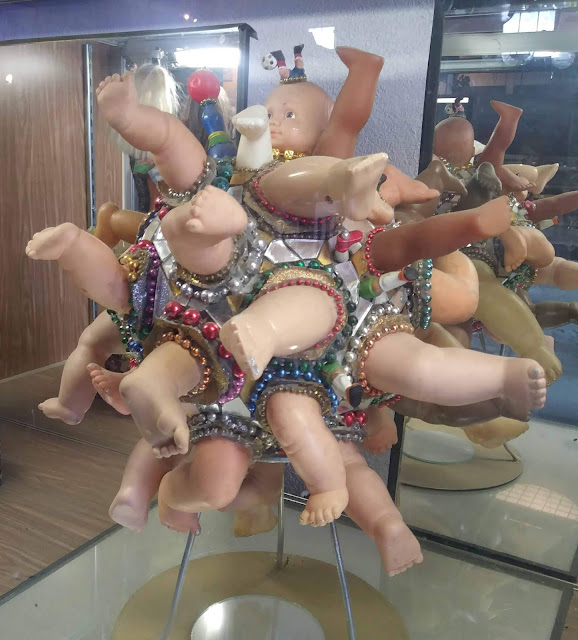 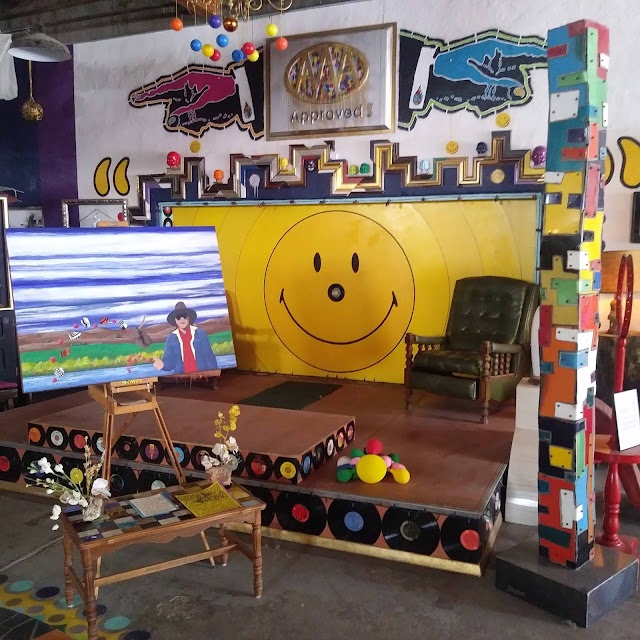 The link below is from Facebook. It's of Dee Washburn performing "Super-Trucker."

In celebration of contractualizing our 26-year marriage (we got legally hitched in January), Michelle and I are spending a few days together in Silver City.

Today we met David Mulvenna (DavidMulvenna.com), Fine Artist and Metalsmith. He gave us a tour of his home, the 16,000-square-foot former Elks Lodge. 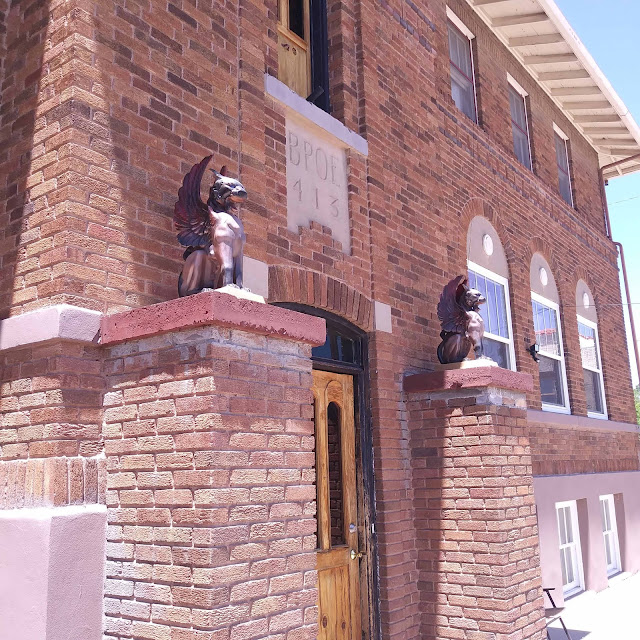 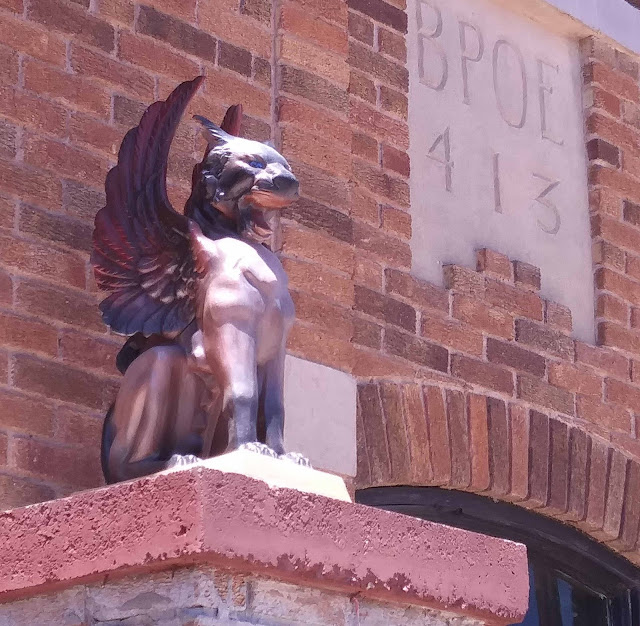 David talks about a base for an elephant sculpture. It's too big to fit through the doorway so he's gonna take out a window. Once a police officer in Cleveland, Ohio, at age 70 he's contemplating his (estimated) fourth incarnation. Know anyone who wants a 16,000 square-foot project in Silver City?

With Morgana, one of his cats.

(I, MFH, was born in the Year of the Dragon. One side benign, the other fire-breathing.) 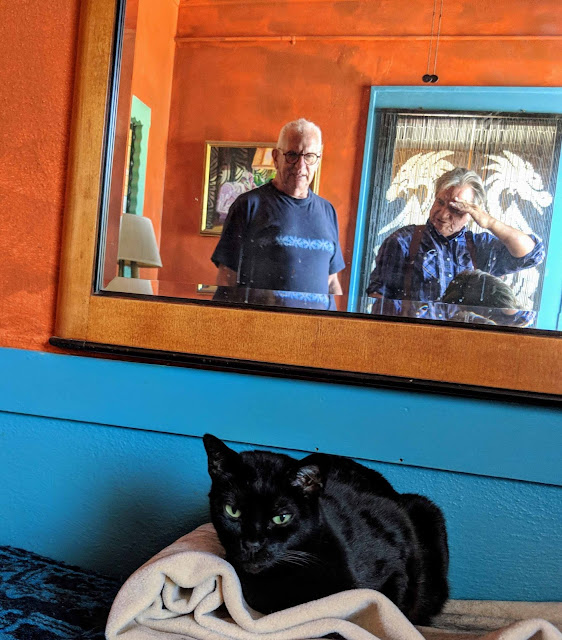 An aphorism of his own 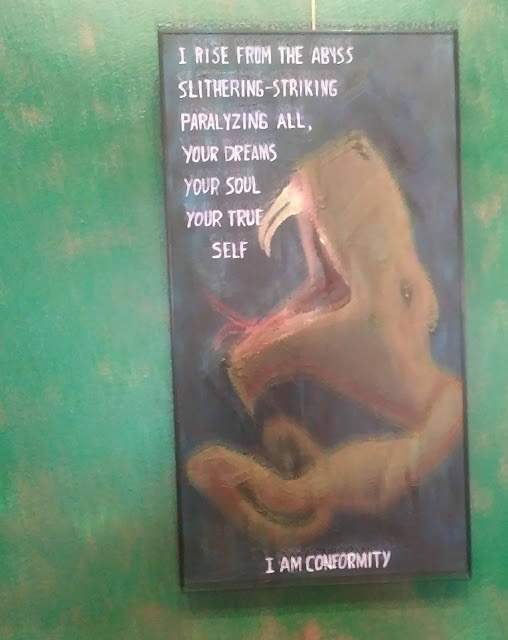 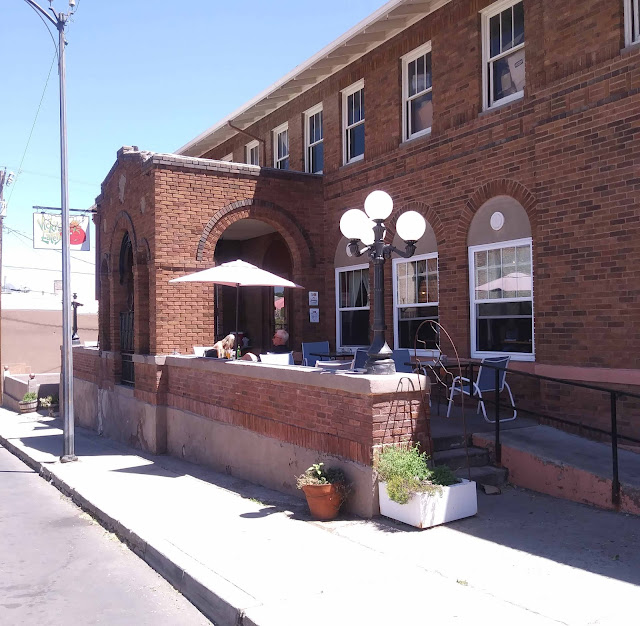 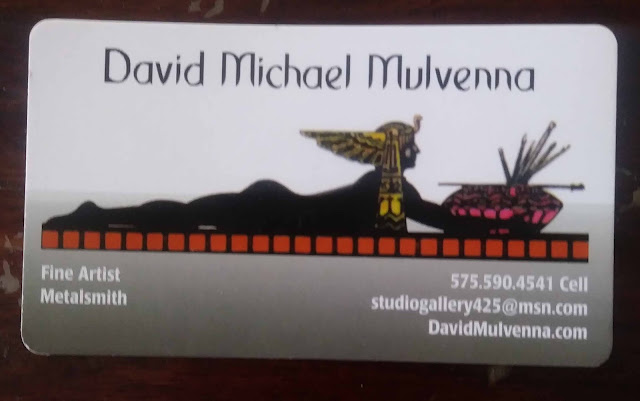 .Michelle acquired this bit of surreality while imbibing at Vicki's. Put it on REPEAT to glean the full effect. Warhol....eat yer heart out.

As always, her timing was Tre serendipitous. I was enjoying the afternoon light on a highway I had mostly to myself and was more than happy to pull over.

It'd been some days since we'd talked. Busy with family -- and our relationship still closeted, with them, anyway -- she hadn't been able to "get away." We chatted, happy to once again be in each other's company.

Afterward, slipping the clutch to resume the journay, I recognized the telltale thump of a flat.

The spare has an interesting device that came with the car. It's a lock that twirls on a specially-designed lug. But I couldn't find the key!  Finally, I decided I'd lost it and, using my new handy-dandy smartphone,  looked up locksmiths. The one at the top of the list referred me to a guy in Eager, which, he said, was closer. I was, so I thought, many miles from a town...let alone, locksmith(s).

When I called Mr. Udall, thinking I was MILES (and HOURS) from help, I asked his opinion on the use of hammer & chisel. He assured me it would be a mistake; likely to make the job MUCH more difficult.

Handing over my keys, he took the one for the ignition and showed how it fit into the lock. After some finessing, the lock slid off the lug. 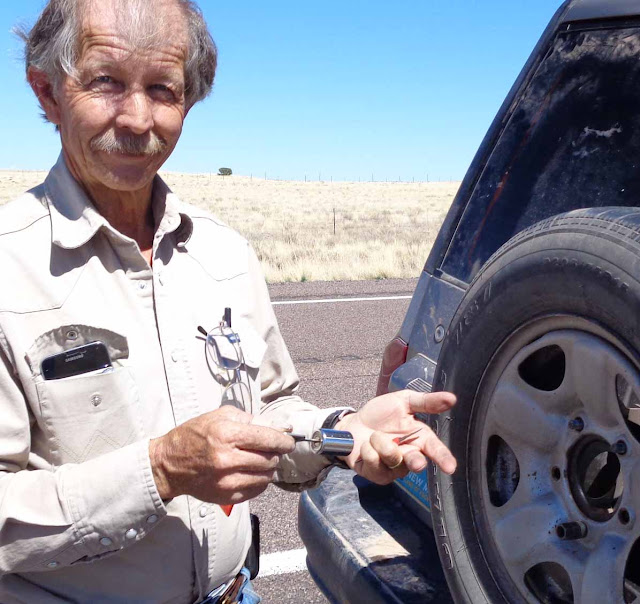 As I stood in slack-jawed astonishment, he demonstrated how the opening for the key was double-sided, just like the ignition key. He analogized with sleuthing and how it's the details that often hold the answer. All yuh gotta do is NOTICE.

While admiring the skill and acumen, I made mental note (gotta remember this one!) to set aside time to document (and fulminate) the continuing deterioration of my memory. I was convinced I 'd lost the key.

He'd done a stint in Federal Enforcement, something with the FBI, and several other interesting kinds of jobs until he and his wife decided they wanted a smaller town. They'd moved to Springerville (1.6 miles from Eager) and he'd started as a handyman. One thing led to another and he now includes "locksmith" among many other skills. 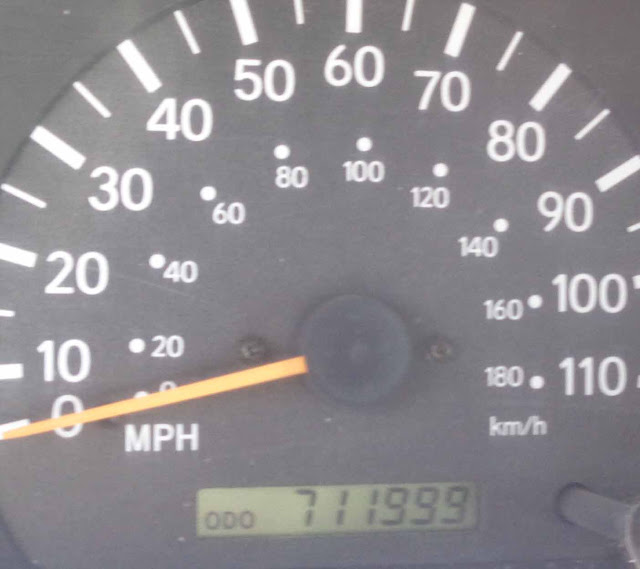 His secret? He uses synthetic oil and changes it every 10,000. To make it all the worse, he said it was the original clutch and brakes. This gave me REAL pause. How many people have the coordination to optimize the accessories like that? Amazing! 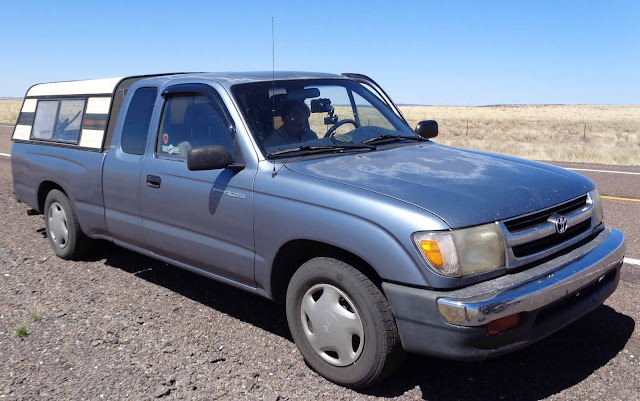 And the most entertaining flat I've had since the time we went to Nebraska in my hearse to harvest wild pot.