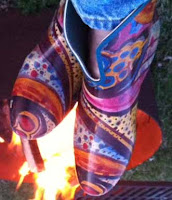 Our online chats led to lust. We agreed (in May) to meet halfway at Lake McConaughy, Nebraska (14.5 km N of Ogalla). The romance was wonderful for a few weeks. We wandered through central Colorado enjoying Spring. As she said before we met, she makes up in enthusiasm for what she lacks in duration.

Well, Yesiree Ma’m & Boi Howdee!! Hit shore wuz good while hit lasted!! And since a gentleman never discusses his relationship(s), I’ll leave it at that.

In July my friend in Albuquerque who’d been undergoing chemo was back on her feet. I ‘queezed intuh muh flyin’ helmet, hollered, “Clear the prop!” and headed North (again) seeking cooler climes. Ten days later I found myself enjoying (superb!) coffee at The Lift (no longer extant) in Pagosa Springs, Colorado (346 km). I brag I averaged 34.6 km a day. Since then I’ve managed to cut that in half. I admit it, I enjoy chiding folks, generally males, on their paces. In those moments when I've had absolutely NOTHING to do (Let’s see....I vaguely recall one about ten years ago), I speculate on when the speed demons find time to tell someone they love them, let alone MAKE love. (It CAN be done while driving (as I'm sure you know), but Safety Clown frowns on that kind of behavior.)

Ummm, ANYway....after Pagosa I began a westward drift. Allow me to commend Mancos to you. A splendid town of about 1119 folks, Mancos sports three (count ‘em!) art galleries and the finest vanilla ice cream yet at Hamburger Haven! (link is to Tripadvisor)

I stopped in Dolores to resupply. It was wonderful!! In addition to a magnificent library with excellent wi-fi, the town features a pair of magpies in the meat department of the local grocery; one makes mewing sounds while the other cracks his gum. They reminded me of a high school I used for eighth and ninth grades (before dropping out) in the rurals of some misbegotten state. The only thing I could surmise is that they, like the poor kids in that high school, just didn’t get enough attention. I returned to the Forest, my socio-cultural needs sated.

P.S. There's a great thrift store in the church at the West end of town. You'll know you're in the right place if the church is sitchiated in a triangle 'tween two roads.
Posted by MFH at 7:55 PM

﻿There were six nuns on their way to the Mission at Ranchos de Taos in their VW bus. (This happened in the ‘60s.) As they were going over the Taos Gorge (900+ feet above the Rio Grande) the one driving was enjoying the view so much she missed the turn. The three in the front had their seatbelts on and lived; the three in the back didn't....and died.

When they got up to heaven (a mythical place of unending orgasm) St. Peter met them at the gates. Apologizing, he said, “Unfortunately, you’ve come on a day when in order to get in you have to answer a question.”

The three nuns looked at each other, shrugged and the first one stepped up.

St. Peter had a stern look as he asked, “What was the name of the first woman God (capitalized as a concession to christians) created?” The nun smiled and replied, “Eve.” And as that was the correct answer, the gates swung open, heralds sounded their trumpets, rainbows filled the sky and with bluebirds twittering, the nun strode up the boulevard into never-never ending....heaven.

Now comes the second. St. Peter gives her the hairy eyeball and in a tone conveying the seriousness of the situation asks, “What was the name of the first man God created?”

“Adam” she replies. And as with the previous, the gates swung majestically, everyone harked to the Harold's, and bluebirds tittered while confetti and ribbons added to the glory.....and she joined her sister.

So now it's the third one’s turn. St. Peter’s countenance is a bit more beneficent. He looks at the nun sympathetically and puts it to her: “What was the first thing Eve said to Adam?”

The nun is a bit taken aback. Sheepishly, she asks if she can have some time to think about it. He agrees to an hour.

She goes off and cogitates. Her hour up, she returns to where St. Peter is waiting.  Having had no success with her ruminations she is decidedly hangdog. Close to tears, as she approaches him she says, “Boy, that’s a hard one.” And the gates swung open, the heralds & bluebirds etc....

ESO: How You and Your Lover Can Give Each Other Hours of Extended Sexual Orgasm by Alan P. Brauer and Donna J. Brauer describes Albolene Moisturizing Cleanser as the nearest thing to one’s own body’s lubricant. It is a bit thinner than crisco, but provides sustained lubrication without being absorbed into the skin. Although not water-soluble, it's easier to remove than other products.

It’s available from CVS Pharmacy and the occasional Walgreen's for around $9.00.

E.S.O. was first published in 1983. The products in this area have expanded tremendously since then, but as you've likely noticed, each has its own characteristics.

The book E.S.O was referenced in:  The Art of Sexual Ecstasy: The Path of Sacred Sexuality for Western Lovers by Margot Anand & M. E. Naslednikov, illustrated by Leandra Hussey.

Information about Ms. Anand can be found by googling Skydancing Tantra.