Aunt Ree Ree was, in her youth, a fan dancer and masseuse. As a young child, I stayed with her several times while my mother flew somewhere to be with my dad. Ree had traveled in Hawai'i and Mexico and every now and then a young sailor would stop by and stay for a week or two.

She had a boardinghouse style two-story a few blocks from Piedmont Park in Atlanta, Georgia. It had a long porch with a big mimosa in the front yard. On summer evenings we'd float candles on her fish pond and enjoy the aroma of the tree's blossoms.

In 1991, I co-signed the 2nd mortgage on my Mom's house so she could buy out the other half from the woman she'd bought the house with. Three days later my mom died (heart attack) and I inherited the house...and the mortgages. I'd recently been laid off from my job and the house needed some repairs. Over the next nine months, using the funds from my 401k, I got it ready for sale. As a final act, I planted several mimosas. Two weeks before foreclosure the house sold. The sale netted me about $1,500.00 and I had one tree I hadn't planted.

Along with Antoinette, the tortoise that lived in my Mom's backyard, and the mimosa, I moved through a series of apartments. Antoinette wintered in the backyard of the last one. She'd gone through a bout of pneumonia that Spring and I'd had to give her shots in her leg to save her. The illness reappeared just before she went into hibernation and as I dug her hole for her -- next to the foundation so I'd know where to watch for her in the Spring -- I wondered if I'd see her again. But one morning, returning from a meeting, I saw the ground opening up and watched her emerge. I kept the tree in a large pot at the top of the steps.

Later that Spring Ms. Cook invited me to join her in her bluecollar hovel. It was MUCH quieter (then) than the beautiful garret I occupied in an old, downtown three-story. The garret, nice as it was, was across the street from a transmission shop. All day long the sound of air guns zipping through jobs filled the air. I moved with much gratitude and relief.

By now the mimosa had been in its pot for over a year and hadn't fared too well. When I planted it in Michelle's back yard it was barely more than a stub. And planting it felt more like a funeral than anything. It's been in the shade of the elm and the two cottonwoods for nearly 30 years. It's not very big, but it's going strong; same as us. 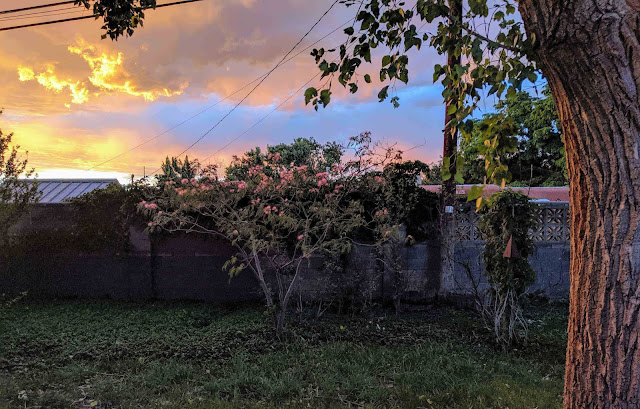