For the past two months, Michelle has been the primary caretaker of Sam & Serena. Serena is a plump, no-nonsense Tabby who prefers to lie on her chaise until dinner is served, then return there to watch Sam at his entertainments.

Michelle introduced Sam to "Stick under the towel" a self-explanatory game. It's brought out Sam's inner tiger and is now a beloved obsession. He can hardly WAIT! Teeth & Claws! HAH!!!

So it was a complete shock when Michelle lay down on the floor to begin the game. Provoked by grief over several recent losses and one major impending (yerz trooly), she'd gone on a sugar-binge the day before. The resultant anger with herself, the culture (she's always been "too fat") and the depression had brought her to despondence.

Sam ignored the stick and towel and, stepping onto her stomach, he climbed onto her back and began rubbing his head against the back of hers. He then lay down on her shoulder. 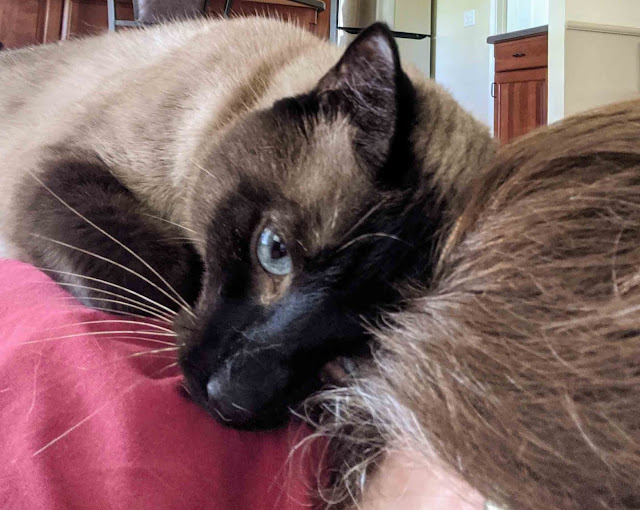 And the look of tenderness in his eye...

It didn't relieve her mood, but it helped.

And then they played!!

Email ThisBlogThis!Share to TwitterShare to FacebookShare to Pinterest
Labels: cats